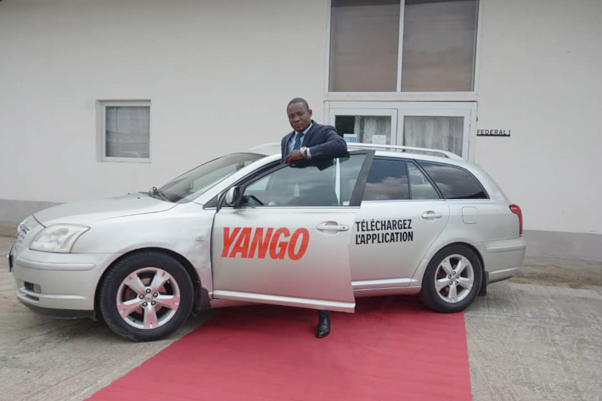 The township taxi sector in Cameroon’s economic capital, Douala, has seen great innovation and modernisation, following the coming into the scene of YANGO, a subsidiary of YANDEX, an international information service for booking taxis online.

At the launching ceremony, the visiting General Manager of YANGO for Africa and the Regional Manager for Cameroon talked elaborately about their innovative service. They also took questions from journalists and curious members of the public that attended the event.

YANGO is unlike other online taxi or transport booking services. What makes YANGO unique is the fact that its app uses its mapping, routing and navigation, as well as smart order distribution.

“These technologies significantly reduce the net cost of the trip and the time that a driver spends seeking a customer, heading to the next customer, or driving a customer to his or her destination. YANGO’s efficiency routing and similar technologies ensure efficient use of drivers’ time while providing predictable and affordable service to riders”, Adebayo and Theze explained at the November 22 ceremony.

Meanwhile, YANGO mobile app for iOS and Android is available for free download in French, English and many other languages.

The YANGO team explained: “To order a car, users download the app, open it and specify where they want to go. When geolocation is enabled, the service pinpoints where the user is and finds the nearby driver who will arrive fastest. The app displays the colour, model and plate number of the car coming to get you, plus information about the transportation provider and its driver.”

With YANGO, somebody in Douala does no longer need to leave the house, office, business site, to move to the roadside to wait for a taxi. With the coming of YANGO, somebody can now easily order a taxi while sitting at home or wherever. More so, the YANGO app makes it possible that after placing the order for the taxi, the person can look at his or her phone’s screen, and see how the car is making its way towards him or her.

With the ride-hailing service of YANGO, the passenger is saved the inconvenience or stress of having to bargain with the driver the taxi fare to pay. It is the YANGO app that calculates the fare that a passenger has to pay, based on the distance and the traffic situation on the road at that particular time.

“It is a cash-only service. So, when a user orders a car, they input the address of the destination, and the app algorithm automatically calculates the fare for the trip ahead of time”, a press statement said.

The tariffs for rides in YANGO taxis in Douala are quite affordable and start from FCFA 200. A journey from Kotto (Tradex antenna) to the Japoma Stadium, which is quite a long distance, can cost about FCFA 1,700 in a YANGO taxi. If one is to go by ordinary taxi, it is at least four taxi drops, with all the inconveniences.

With YANGO, when somebody orders for a taxi and happens to be with his partner, friend, child or whoever, the fare for the ride remains the same.

There are two categories of YANGO taxis, and the fares are thus different. There are taxis with ACs (Air condition) that are known as Comfort, and those without ACs, known as Eco. Of course, it is just but normal that the fare for a ride in a Comfort should be a bit higher than that of Eco. When booking, clients have to indicate the type they want.

As regards convenience, once a passenger places an order, the taxi cannot stop on the way to pick any other passenger. A passenger that places an order for a taxi is driven alone or with the person accompanying him or her to his or her destination. This eliminates the inconvenience and risk of one having to share a car with other passengers. This is to ensure safety in a YANGO taxi.

Still, on safety, a user can share the YANGO app with a family member or friend who is accompanying the user, and the person can use the app to monitor the movement of the car until it gets to the destination. Also, emergency services can be contacted via the app, if it becomes necessary.

Users in need of more information, or who forget something in the car, can contact a dedicated support team through the app.

YANGO Does Not Own The Cars

The General Manager of YANGO for Africa, Adeniyi Adebayo, and the Regional Manager of YANGO for Cameroon, Didier Theze, disclosed that the cars that carry the name, YANGO, which the Douala population commonly calls YANGO taxis, are not owned by YANGO. They explained that, as YANGO operates in other countries, the cars are owned by enterprises and individuals. It is also the enterprises and individuals that recruit the drivers. The drivers are trained on how to use the app, and only those who pass the test on how to use the app are recruited.

Adebayo and Theze explained that the owners of the cars sign partnership agreements with YANGO. A driver must be neatly dressed, be of good character and treat all clients with respect.

As a means of additional quality control, YANGO app gives users the possibility to grade drivers, and drivers that have low grades for some time are likely to face suspension or even dismissal.

YANDEX which is known as YANGO in Africa operates as an international information service for booking taxis online in a total of 18 countries in Europe, Central Asia, the Middle East and Africa. More than two million drivers are currently providing rider and delivery orders in countries where there is YANDEX taxi service.

In Europe, YANDEX is involved in other businesses as well. For example, the YANDEX taxi service in the Netherlands is part of a technology company that builds products and services that help consumers or businesses to better navigate the online and offline world.

In Africa, Cameroon is the third country where YANGO now operates, coming after Ivory Coast and Ghana. As to why the name YANGO instead of YANDEX is used in Africa, the General Manager of YANGO for Africa, Adeniyi Adebayo, explained that the company decided to adopt the name YANGO in Africa, to give the name an African touch.

Cameroon As A Strategic Choice

Adeniyi Adebayo, in an interview granted The Post, said the company was quite happy to be in Cameroon.

“The choice of Cameroon is because of the strategic importance of the country in Central Africa. We believe that there is a very dynamic market here. Douala is an important city, not only for Cameroon, but also for Central Africa because of the port. There is a lot of business here. The more trade or business happens in a city, the more people move from one part of the city to the other.”

Adebayo said Douala also has a lot of young people. He remarked that the general tendency for young people is that they like to go out to visit bars, restaurants, night clubs and other places. He said they need comfortable, convenient and safe taxis to go out, and that is the service YANGO brings.

He revealed that there are plans to extend YANGO services to other towns in Cameroon, including Yaounde.

The General Manager said groundwork is currently going in some countries like Nigeria. “We are interested in all of Africa, though it is true that some countries have more viability than others for our business. We look at the dynamism in a city”, he explained, adding that, “There are a lot of interesting cities all over Africa.”