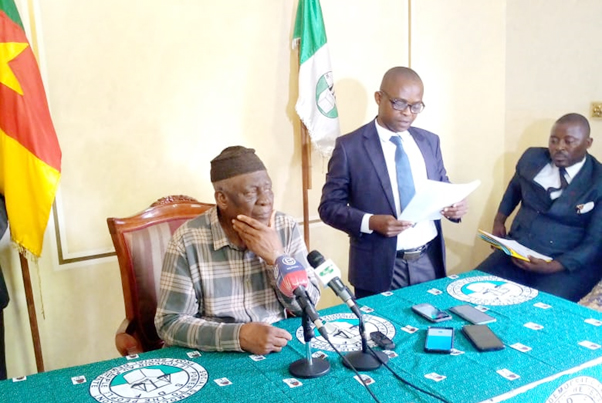 The SDF leader announced on February 11, 2021 that he will not run for another mandate, for he wants to handover the baton to a younger person to be elected at the party’s convention.

Following Fru Ndi’s disclosure, three aspirants have since made their ambitions known. The three include the 1st Vice National Chairman of the SDF and member of parliament, Hon Joshua Osih, the Littoral Regional Chairman of the party and parliamentarian,  Hon Jean Michel Nintcheu, and the Mayor of Loum, Wambo Guy Mesmin, whose candidature was declared on the social media.

Campaign Of Defamation And Distortion Of Facts

As soon as Hon Jean Michel Nintcheu declared his intention to run for the post of the National Chairman of the party, he and his men embarked on a campaign of defamation and distortion of facts against one of the aspirants, Hon Joshua Osih, considered by many as the front runner in the race.  Nintcheu made a  defamatory declaration over Radio Equinoxe  in Douala on March 16, 2021, that Hon Osih who was the SDF candidate at October 7, 2018 Presidential Election, went to the Civil Cabinet of the Presidency of the Republic four days to the election, and collected money to sell his votes to the incumbent candidate, Paul Biya. Nintcheu claimed he had the evidences.

In reaction, Hon Osih who declared that he never even stepped foot at the Presidency in the whole of 2018, challenged Nintcheu to make public the purported evidences he claimed he had. When journalists started running behind Nintcheu for the evidences he claimed he had, he instead embarked on an evasive game. In reality, he had no evidences, as the allegation was spurious. Since then, Nintcheu and his camp have never talked about the allegation again.

Surprisingly, the National Executive Committee, NEC, of the SDF was silent on such terrible defamatory declaration against Osih.

Probably encouraged by that, the Nintcheu Camp has for some time now been making another allegation against Osih, alleging that Osih wants to drag the SDF to enter the CPDM Government. Again, the camp has not provided any bit of evidence to back their claim, and NEC has also stayed mute.

From all indications, the Nintcheu Camp’s lone strategy which they seem to think can enable them to grab the post of National Chairman of the SDF, is to continuously mount a smear campaign to tarnish the image of the frontrunner in the race, Hon Osih.

Part of the strategy of the Nintcheu Camp is to heap the blame for SDF’s poor performance at the 2018 Presidential Election, as well as the 2020 Legislative and Municipal Elections on Hon Osih. Also, it is not surprising that members of a group of some former and current SDF officials that met in Mbouda a few days ago, and that for selfish reasons do not want Osih to become the National Chairman of the party, are also now putting the entire blame for SDF’s poor performance at the 2018 Presidential Election on Osih, who was the party’s candidate in the election. Some of them are even today dishonestly contradicting declarations they made after the presidential election, as regard the causes of the poor performance of the SDF in the election.

In Cameroon, few major political parties have their fiefs or tribes that staunchly support them. As for the SDF, it is an open secret that the frontline opposition party, has had as its staunch supporters what some people call Anglo-Bami. That is the people of the two Anglophone Regions, and the Bamilekes who hail from the West Region.

Political observers had thus over the years considered it an indisputable fact, that if anything serious perturbs the organisation of elections in the two Anglophone Regions SDF would be the most affected political party.

And so with the eruption of the Anglophone Crisis in 2016 and its escalation in late  2017 into an armed conflict between Government troops and separatist fighters, it was clear that SDF would be seriously affected if any national  election. And that was what exactly happened at the October 7, 2018 Presidential Election in Cameroon.

Statistics of the 2011 and 2018 Presidential Elections, published on Cameroon Tribune of Monday, October 24, 2011 and Tuesday, October 23, 2018 respectively, speak for themselves.

Voters and even polling agents did not turn out because of insecurity and threats that were issued by separatist fighters. The National Chairman of the SDF, Ni John Fru Ndi, who was one of the very few civilians that braved it to the polling stations in the Northwest Region, told the press after voting, that he identified a female police officer with whom he had an issue at a police checkpoint one day, passing around as an agent of Elections Cameroon, ELECAM, in the polling station where he voted.

The SDF Presidential Candidate, Hon Joshua Nambangi Osih, like other presidential candidates, could not travel to the two Anglophone Regions for campaigns, because of the high rate of insecurity.

Meanwhile, in the Francophone part of the country, it was observed in places like Cameroon’s economic capital, Douala that many SDF militants of the Bamileke tribe instead voted for their tribesman, Prof Maurice Kamto, who was the presidential candidate of the Cameroon Renaissance Movement, CRM, of which he is also the National President. .

When The Post contacted the Littoral Regional Chairman of the SDF, Hon Jean Michel Nintcheu, on the issue, he admitted that many Bamilleke SDF militants in Douala for example, voted for the CRM candidate, Kamto, who is their tribesman.

However Nintcheu argued that the decision of the Bamileke SDF militants was not only based in tribal consideration, but was also based on a logical argument.

Hon Nintcheu confirmed to The Post that a correspondence was addressed to the Bamileke people across the country, stating that for the first time since Cameroon’s independence, there was a real chance of a Bamilleke son (Prof. Kamto), to become the President of the Republic. All Bamilleke sons and daughters were thus called upon to support the candidature of Kamto at the October 7, 2018 Presidential Election, whether they were militants of CRM or not. In Douala, the correspondence was secretly read at all Bamilleke Community meetings.

The Argument Of Bamilleke SDF Militants

As regard what he termed a logical argument, Hon Nintcheu told The Post that many Bamilleke SDF militants in Douala who spoke with him about the October 7, 2018 presidential election, argued that to cast their votes for the SDF presidential candidate would be a waste because it was certain that there would in reality be no election in the two Anglophone Regions due to the escalated Anglophone Crisis.

It would as well be recalled that in the first NEC meeting after the October 7, 2018 presidential election, Ni John Fru Ndi said he was scandalised to hear that some card-carrying SDF militants voted for the candidate of another party at the presidential election. He stopped short of mentioning the names of the CRM and his party.

Why SDF Could Not Boycott

Political observers were unanimous in their view that in the face of the escalated Anglophone Crisis, which prevented the holding of real elections in the two Anglophone Regions, there was just no way that a presidential candidate of the SDF, no matter the personality, would have done well in the 2018 Presidential Election.  But there were questions as to why the SDF did not boycott the October 7 Presidential Election, considering the armed conflict and insecurity in the party’s fief.

However the explanation given by the SDF hierarchy was based on a resolution that was adopted by the party’s National Convention some years ago, which prohibited the party from boycotting any election.

It looks like when it comes to elections, even internal elections, some politicians have no room for truth.

It would be recalled that when this debate on the cause of SDF’s poor performance at the 2018 presidential election came up at ‘Scenes de Presse’ over CRTV on Sunday, May 30, 2021 as SDF celebrated its 31st anniversary, NEC member, Yvonne Bih Muma, insisted that anybody that had expected SDF to perform well at that presidential election, was being dishonest.

She asserted that the two Anglophone Regions are the two sure fiefs of the SDF, and that no real elections took place in the two regions because of the escalated Anglophone Crisis.