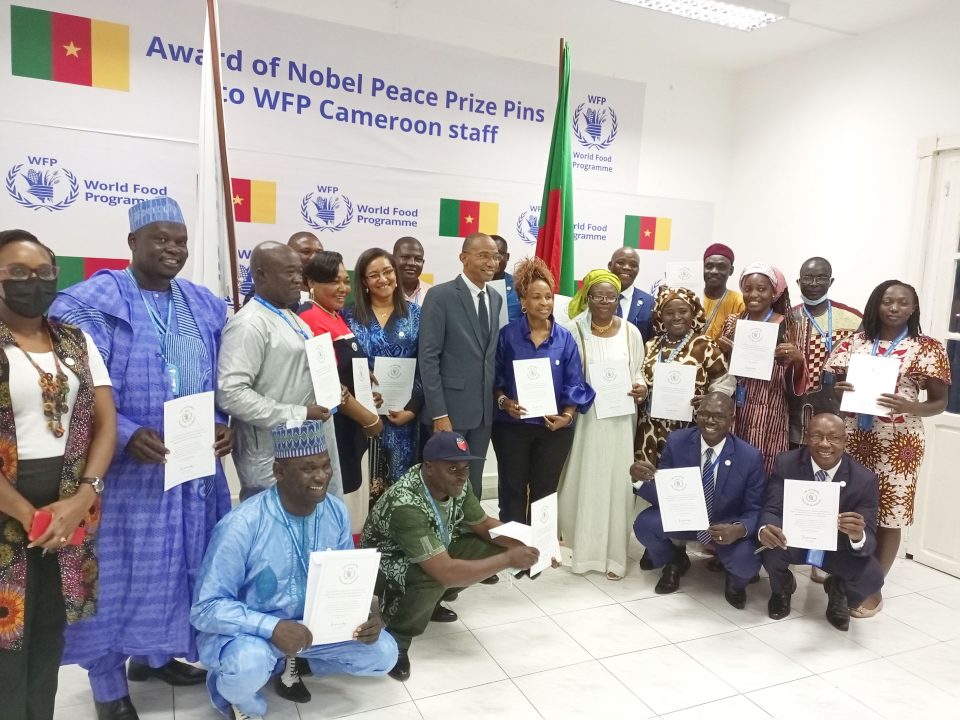 Workers of the United Nations World Food Programme, WFP Cameroon, have been urged to work harder in serving the population in need.

The call was made on October 22 by Wanja Kaaria, Country Director and Representative of the Programme in Cameroon.

Wanja Kaaria was speaking on the occasion to celebrate the Nobel Peace Prize awarded to the institution in 2020. The ceremony witnessed the presence of the UN agency’s Regional Director for West and Central Africa, Christopher Nikoi.

While giving the Nobel Peace Prize Pins to WFP Cameroon staff, Wanja Kaaria said the ceremony was aimed at highlighting the consistent efforts of the staff and contributions towards improving the food security situation in Cameroon.

The event was, among other things, to showcase the role of Government, donors and the wider UN community in supporting the attainment of SDG 2 and 17 in Cameroon, as well as garner support and engagement for WFP’s work.

“Today was just symbolic, but it is for all WFP. We have a rich staff of 250 all over the national territory. It is symbolic and we are happy that the Regional Director is here to participate in the act and the staff to feel the warmness of receiving the certificates of recognition from his hands.

“I urge you all to work hard because we have a lot to do. In Cameroon, food analysis shows that 2.6 million are food insecure and we are only reaching one million. We also need to reach the rest and there are also a lot of challenges – Cameroon being a generous host is supporting a lot of refugees from CAR and Nigeria,” Wanja Kaaria said.

Recipients of pins and certificates of recognition came from Yaounde, Bamenda, Meihiaga, Maroua, Douala, Buea, Bertoua and Bamenda, among other areas.

On October 9, 2020, the Nobel Peace Prize 2020 was awarded to United Nations World Food Programme, WFP, “for its efforts to combat hunger, for its contribution to bettering conditions for peace in conflict-affected areas and for acting as a driving force in efforts to prevent the use of hunger as a weapon of war and conflict.”

In the meantime, WFP and the Government of Cameroon, through the Minister of External Relations, Mbella Mbella, have charted ways of mobilising resources for Internally Displaced Persons and refugees in the country.

“We talked about how we can collaborate with the Government to increase our joint efforts in mobilising resources for the refugees from the Central African Republic who are in the country and also people who are affected by the Boko Haram insurgency in the Far North Region,” Christopher Nikoi said after the meeting.

He added that; “We did talk on food security and, as you know, conflict is one of the key drivers of food insecurity. The conflict in the Far North, the North West and South West Regions of Cameroon is creating problems for people who are displaced and they are not able to maintain their livelihoods.”

Traceability Norms In Exploitation, Sale Of Diamonds Not Respected In Cameroon – Report

Understanding How Titles Have Relegated Women To Back-Burners In Cameroon