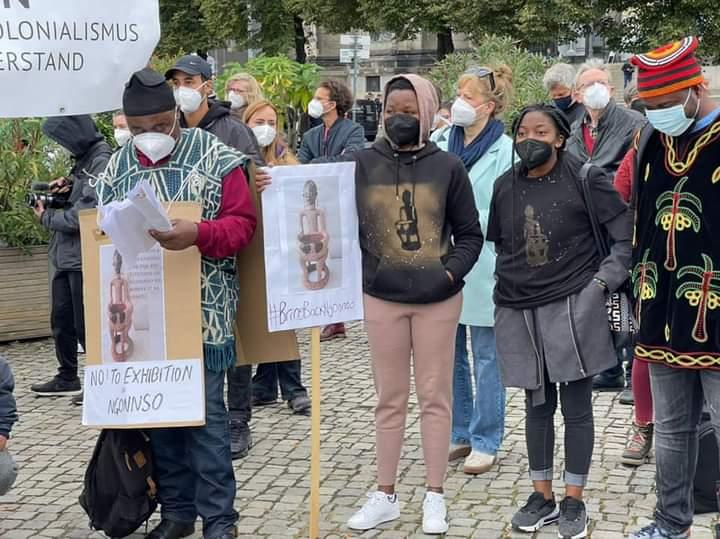 Nso kith and kin resident in and out of Nso, have strongly condemned a ‘colonial sin’ by the Germans who, in the colonial era, stole from the clan the sculpture of their founder, Ngonnso.

Nso’s prized pride was shipped to German where She has, for over a century, been imprisoned in a bunker, and is now being exhibited like a common piece of art.

The Nso clan, located in Bui Division in Cameroon’s Northwest Region, is one of the few clans around the globe founded by a woman, who has become a symbol of her people spread in thousands around the globe.

Being a very culture-loving and sensitive people, Nso people have held, in high esteem and reverence, their founder, Ngonso. To immortalise her, her sacred sculpture was made by her descendants and placed at their Palace (Ntoh Nso), in Kimbo.

Unfortunately, Cameroon’s first colonial master, Germany, in its wars against the people during which they looted prized objects, also took with them, the pride of the Nso man, Ngonso, now imprisoned in a bunker and displayed for public view.

The call to return Ngonso to her people was made on September 22 in a public manifestation in and out of the Cameroon, following the public exhibition of Ngonnso’s sculpture at the Alexander Von Humboldt Centre, Dahlem, Berlin in Germany. The spiritual mother, Yaa Ngonnso, is labelled as sculpture III 15017.

While condemning the forceful imprisonment of their mother in bunker, Nso sons and daughters echoing the message of the entire tribe in front of the centre in Germany also demanded the restitution of Ngonnso and other artefacts in Germany and other parts of Europe.

“I bring you greetings from Nso in Cameroon, a peaceful and prosperous land that has now turned into shackles and a jungle of war and calamities, all these partly caused by the encounter between Nso and Cameroon’s colonial masters with Germany being one. The power structure created by colonialism is still affecting how we live our lives,” Sylvie Njobati, coordinator of the #BringBackNgonnso campaign, said.

She added, “… I am a young person who is disconnected from her culture and identity. How can I even move forward when I don’t even know where I am coming from? Today, I stand here representing the Nso people to strongly condemned the forcefully imprisonment of Ngonnso and other artefacts in Germany and other parts of Europe.”

Speaking during the Humboldt Forum, Nigerian Writer, Chimamanda Ngozi Adichie, said, even though she does not think everything should be sent back to countries where they came from, she thinks that those things that are sacred should be returned.

According to her, though the people may not have all the information, they can still deduce from broken pieces of historical facts, a reasonable conclusion “that the Ngonnso, a guidance image of the Nso people in Cameroon, former colony of Germany could not possibly have been obtained under regular circumstances.”

“Why will you willingly give up your guidance spirit? It is also important to remember that not all wounds are visible. Some wounds we carry in our hearts are inherited from parents and passed onto our children, but this discord is of course not about Humboldt forum. It is about museums all over Europe, France, Vatican and Britain and I most acknowledged that Germany is the first of the European nations that has made a gesture towards returning the artefacts,” she added.

However, going by the people of Nso, the absence of Ngonnso has caused calamities, turmoil, turbulence that have continuously ravaged the cherished Nso dynasty. It has also been said that the absence of Ngonnso’s sculpture has influenced the spiritual lives of Nso natives. Presently, the Nso people are unable to perform their spiritual rituals for the edification of their souls. They say the return of Ngonso will mark a new beginning for her people.

The Nso people have maintained that Ngonnso is a symbol of unity to her people. Her return will restore peace especially in the intra-fondom disputes ongoing in the land and the current armed conflict in the Anglophone Cameroon wherein, the number of deaths is alarming especially in the Nsoland that makes up almost all of Bui Division.

In order to mount pressure for Ngonnso to be returned, Nso indigenes and well-wishers have also taken to social media platforms such as Facebook and Twitter to request for her return.

The Nso people have. for over 40 years been requesting for the edifice of their ‘mother’ to be brought back. The Ngonnso Sculpture has not been in its place of origin since it was stolen some 119 years ago.

In the past, Fons have written letters to the museum demanding the return of the sculpture but, on several occasions, the requests have been turned down. Diplomatic meetings have held and the process seems to be slow and not favourable to descendants of Ngonso.

Started in 2021, the #BringBackNgonnso campaign is aimed at further creating awareness and facilitating dialogue between Germany and Cameroon in general and the Nso people in particular on the restitution of the effigy which was looted during the colonial era.

Issues At Stake: Of Shameless Pretenders To Peace And Need For Inclusive Dialogue

NSO Fako Fete Their Culture In A Grand Jamboree