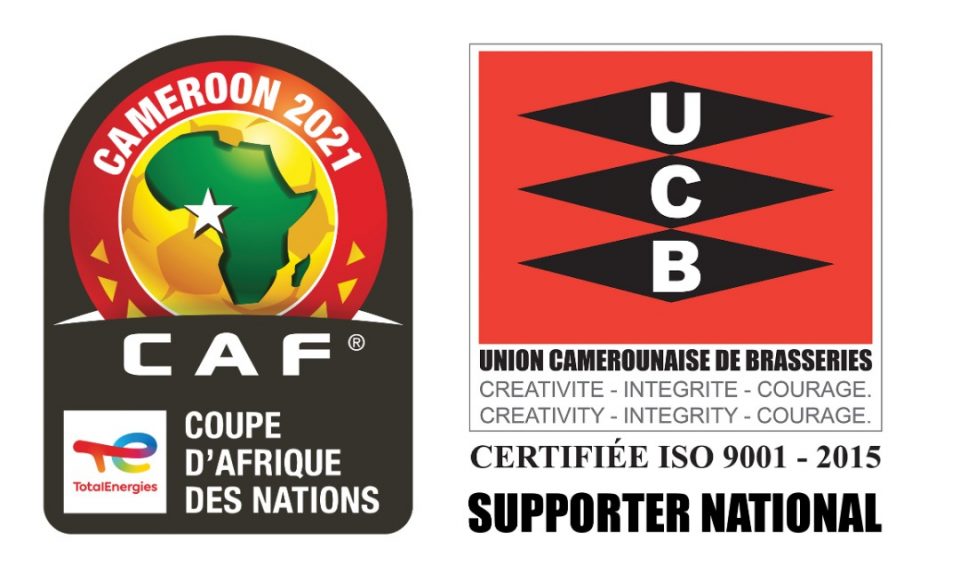 The indigenous Cameroonian brewery, ‘Union Camerounaise de Brasseries”,UCB, which was founded in 1972, that is 50 years ago, is making Cameroonians and Africans happy and proud in its status of National Supporter of the  Africa Cup of Nations, TotalEnergiesAFCON2021. The  continental football jamboree that kicked off on January 9, 2022, is scheduled to run up to February 6.

UCB got the status of National Supporter of TotalEnergies AFCON2021 in Cameroon after discussing and signing a partnership agreement with the Confederation of African Football, CAF.  The status of National Supporter, according to CAF, makes  UCB the official and exclusive supplier or provider of mineral water, soft drinks and beer throughout the 33rd edition that kicked off on Sunday, January 9, in Cameroon.

The lovely UCB products include:  Madiba (mineral water), Special Pamplemousse and Special Orange as soft drinks, and Kadji, King and K44 as beers.

In a press release, that was issued at the CAF Headquarters in Cairo, Egypt, on December 15, 2021, the Secretary-General of CAF, Veron Mosengo-Omba, recalled that the first AFCON that took place in Cameroon was way back in 1972, that is, 50 years ago. He said CAF is  today quite happy to see an enterprise that is proudly Cameroonian and African as well,  supporting AFCON.

The CAF SG also asserted that UCB, as a purely African enterprise, and falls in line with the asoiration of CAF which is to promote the African trademark, to see that Africans are proud of their own products. He  ended  up by welcoming UCB onboard AFCON, the biggest sports event in Africa.

Reacting to the partnership signed between CAF and UCB, the Marketing and Communication Director of UCB, Jacques  – Derce Mouen, stated that: “From 9 January to 6 February, we will be besides our African brothers and sisters, to offer the best of our country through our values of Creativity, Courage and Integrity”.

The dynamic and perfectly bilingual UCB’s  Director of Marketing and Communication, Jacques- Derce Mouen, met dozens of Cameroonian media men and women that the company invited to an occasion in Douala on December 31, 2021, to be briefed on the status of UCB as the National Supporter of TotalEnergiesAFCON2021. Though the occasion was not a press conference, the  Marketing and Communication Director willingly took as many questions as journalists could ask, in a bid to leave no one in doubt as regarded UCB’s status of National Supporter and how prepared the company was to carryout its mission.

In response to some of the questions, Mouen argued that if the partnership between CAF and UCB is new, the latter is, however, not knew in the promotion of football. He asserted that the Kadji Sports Academy, which is part of the UCB family, has been opersting for several years, and has over the years sent out so many young football talents, quite a number of whom grew up or have grown up to the status of international football stars. He said  the UCB family was both happy and proud, for example, that football icon, Samuel Eto’o Fils, who is today the President of the Cameroon Football Federation, FECAFOOT, is a product of Kadji Sports Academy.

Meanwhile, UCB swung into full action as from Day 1 of the 33rd edition of TotalEnergiesAFCON2021, in its capacity as National Supporter. UCB has been animating official fan zones of AFCON in Douala like the one at Parcour Vita, as well as all the other official  fan zones in other sites hosting AFCON.

Sports fans have been enjoying the lovely and assorted UCB products, while watching AFCON matches.

As a renowned  promoter of football over the years, the slogan that the UCB family has put out with its new status of National Supporter of TotalEnergiesAFCON2021, is: UCB – Obviously Behind The AFCON. What an apt slogan!

Cameroon Should Anchor On God More Than Ever Before – Rev. Eunice Fonka

Why Are Ministers Referring To State Projects As Gifts From Biya?