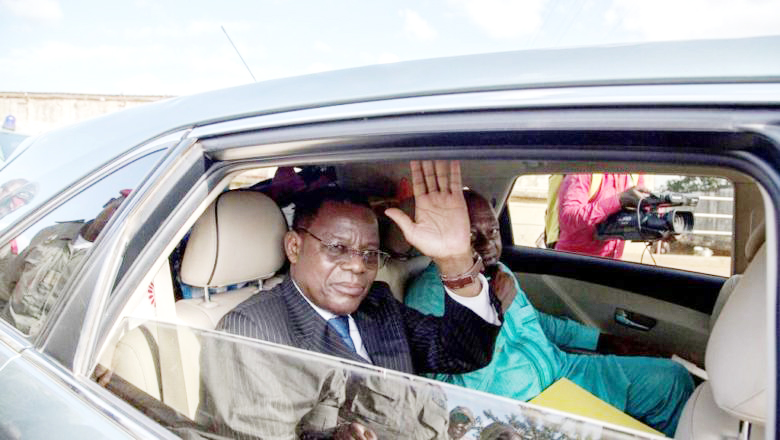 Kamto Maurice waves from the car

The Cameroon Government has placed the President of the Cameroon Renaissance Movement, CRM Party, Professor Maurice Kamto under house arrest in a bid to block him from launching his book in Douala.

The news of his house arrest came on Wednesday, December 3 but the secretary-General of the CRM party, Barrister Ndong Christopher said that has been the case for three days.

Maurice Kamto had earlier launched the book in Yaounde and proceeded to Douala where he going to meet officers of the party at the level of the Wouri, to visit political prisoners detained “unjustly” and also to launch his book.

According to the CRM Scribe, when Kamto announced at the end of his two visits while in prison that he was launching the book, the government got “scared” and went on to block his hotel because of his “influence”.

He said police and gendarmes were mobilised all over Douala. Videos circulating online showed water tanks and other combat equipment stationed at some Douala neighbourhoods like Bessengue and others.

Ndong Christopher said the government did not block Maurice Kamto in Yaounde but did in Douala because it is the fief of the CRM Party.

The Barrister said if not because the military is tempting, and provoking Kamto, why was he blocked at his Bessengue Hotel in Douala.

“He has been blocked at the entrance of the hotel, nobody can come, nobody can go out,” he said adding that people who go in or out are being checked.

“It is illegal, it is arbitrary,’ he said. ‘Is he not in his country?” he questioned asking whether they will “block the whole of Douala”.

Since his arrest, many are calling for his freedom. Cameroon People’s Party CPP president, Edith Kah Walla said on Twitter that the President of CRM, Maurice Kamto has once again been illegally sequestered in his hotel in Douala by the Government of Cameroon.  She said the “Incapacity of Biya Regime to go a few hours without a flagrant human rights violation is extraordinary. Above all else, Mr Kamto is a Cameroonian citizen with rights to freedom of movement & expression.  What is happening in Douala that should violate this right? Release him!”

After the 2018 presidential elections, Maurice Kamto was arrested in Douala among others and later transferred to Yaounde where they were detained for months. He was protesting that his victory was stolen during the elections.

2008-like Strike Looms As Bread, Other Commodities Prices Hikes