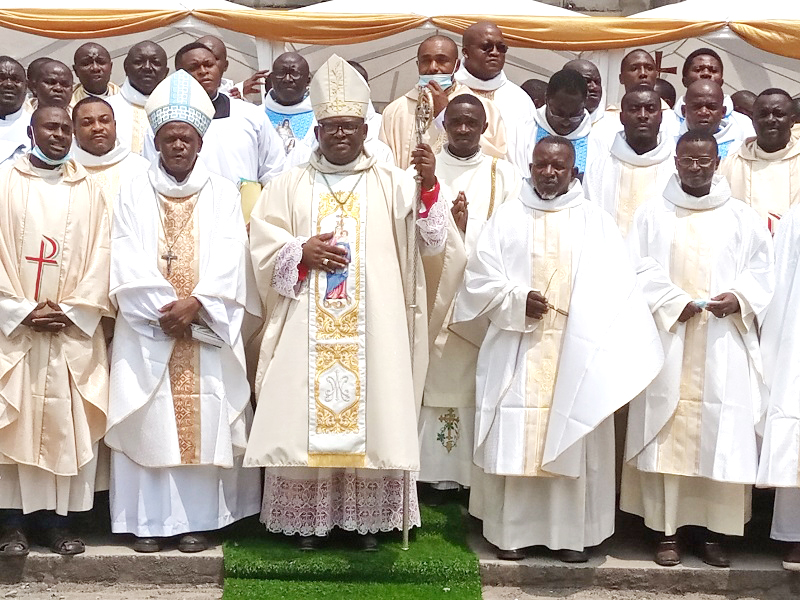 Bishop Bibi celebrated his First Anniversary with predecessors and priests

Serving God from a position of weakness will be unacceptable for Michael Bibi who has just celebrated one year as Bishop of the Buea Catholic Diocese, promising to institute order and help Christians improve and strengthen their spiritual lives.

Before hundreds of Catholic Christians, clergies, friends and family members, at the Divine Mercy Co-Cathedral on Friday, February 25, Michael Bibi stated, without mincing words, that there shall be no “untouchables” in the Diocese.

He equally added that he will not tolerate any disorder from whosoever.  Though not sounding arrogant, it was a tough message for Christians who might have been criticising the Bishop for carrying out sweeping reforms in the Diocese.

Appointed in 2019 as the Apostolic Administrator of the Buea Catholic Diocese, Michael Bibi has cracked down on those who thought they could do and undo in the Diocese.

First, he sacked Rev Fr Nkeze, a controversial priest, from his position as President of the Catholic University Institute of Buea, CUIB. This man of God later dragged the Bishop to court but lost the case.

Another challenge that again brought the Diocese to the lamplight was a recent saga involving the Diocese’s former Financial Secretary, George Ngalame, who reportedly proposed to his long-time girlfriend in the United States of America.  His marriage engagement got many talking about the Diocese, as some alleged that he was still a priest and was restricted by Canon Law from taking such a move.

Recently, Bishop Bibi also suspended six lay associations from operating in the Diocese, on grounds that their existence brought chaos and disunity among Christians.

Recently, some seemingly aggrieved Catholic Christians have taken media spaces to castigate the Bishop for these decisions which they classified as “mortal sins”.

However, the Bibi warned he will not tolerate people who want to use the Diocese’s resources as personal property, stating there will be no room for disorder in the Diocese.

“We are all aware of the trials that we have experienced as a Diocese within this short time of my stay here. The so-called many attacks on the person of the Bishop and concentrated ecclesiastical authorities over social media, over some newspapers, over some TV stations,” he said, adding that, “I am not going to give room to any mediocrity in this diocese and all those who want to feed fat from the resources of the church, and run the affairs of the church as their personal properties must be brought to order.”

He also warned that he “will not give chances to any disorder in this diocese and there shall be no untouchables when it comes to the aspect of proper administration in the diocese”.

Despite these challenges, coupled with the Anglophone Crisis, which he said has negatively affected the Diocese, Bishop Bibi said there is need to thank God because, together with the priests and the laity, he has worked to improve on the spiritual lives of Christians.

He said the Church, through its humanitarian arm, CARITAS, has assisted several Anglophone internally displaced persons within the Diocese.

Irrespective of the encumbrances, Bishop Michael Bibi said he looks forward to having a more united Diocese with priests and the laity working together with the Bishop as one family.

“I call on the Christians to be more committed in their faith and to make sure that despite of the challenges, the difficulties they do encounter in witnessing to their faith, they should be able to persevere because their perseverance at the end of the day will win them their lives.”

At Bishop Bibi’s first anniversary several Diocesan associations supported him and openly declared their loyalty to him and the Church against detractors.

At Promote, UK Pavilion: Women Urge To Be Innovative, Trust Themselves While In Business