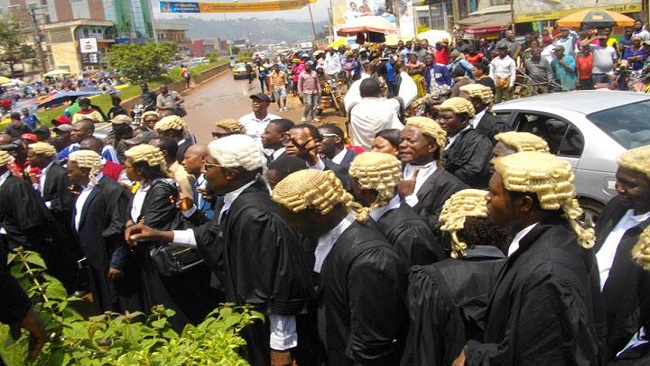 Little did the Government of Cameroon and the population at large know that what the teachers and lawyers packaged as grievances plaguing their professions, and which needed to be addressed urgently, was what would eventually be breaking down the nation’s back.

The grievances sparked the unimaginable and, for almost five years down the road, what was hitherto simply referred to as the Anglophone Problem evolved into a crisis and quickly morphed into an armed conflict between the Amba boys – fighting to restore the independence of the former British Southern Cameroons – and the defence and security forces – battling to maintain the unity and integrity of the country.

The Government argues that adequate solutions to the teachers’ and lawyers’ grievances have been provided even beyond what they requested for and room would therefore not be given to those they say are fighting to ‘divide’ the country. That is why the Government is using the iron and fist method to crush the Amba boys against national and international calls for a true, genuine and inclusive dialogue to resolve the crisis.

In this write-up, we shall revisit the grievances that acted as the springboard of professional and later societal demands whose handling by Government made it to morph into a full-blown war. Lawyers took to the streets of some major towns of the Northwest and Southwest regions when their demands for government to redress issues drowning the Anglo-Saxon Common Law practice were ignored. Instead, they were battered and their robes confiscated by the forces of law and order.

This triggered pent-up anger and bitterness as the Cameroon Anglophone Teachers’ Trade Unions also engaged an industrial action, leading to school boycott from November 21, 2016. The calls to resolve these professional grievances failed to receive due and prompt response from the Yaounde authorities, thus snow-balling into the present armed conflict.

Therefore, in a quest to sought belated solutions to the problems, the Government created Committees: one to handle the issues raised by lawyers; and the other to tackle the grievances of the teachers. While that for the Lawyers met in Yaounde and headed by the then Minister Delegate in the Ministry of Justice, Prof. Jean Pierre Fogui; that for the teachers took place in Bamenda under the Committee’s Chair, Prof. Paul Ghogomu Mingo, the then Director of Cabinet at the Prime Minister’s Office. Anchoring on recommendations from the Committees, government announced concessions to assuage the concerns of the professional groupings.

At this point, the government rather committed a monumental error as it turned around and arrested some leaders of the Anglophone consortium that was created to ease dialogue with the authorities. The arrested leaders – notably Barrister Felix Nkongho  Agbor and  Fontem Afortekah Neba – who were members of the committees set up by government, created a void that was quickly filled by ‘Amba’ today pushing across the ideology of restoring the independence of the former British Southern Cameroons.

In a bid to resolve the problems raised by the Cameroon Anglophone Teachers’ Trade Unions, the government took a number of measures claiming that the concessions made went beyond what was demanded. The Ministry of Secondary Education, MINESEC, redeployed teachers in December 2016 with a bulk of them sent to the Southwest and Northwest Regions. This, they said, was to tackle the problems raised on the non-mastery of language of instruction and acute shortage of teachers. Lecturers not fluent in the English language were also redeployed away from the Universities of Buea and Bamenda.

On the acute shortage of Anglophone teachers in technical/industrial and commercial domains; science and technology, 1,000 young bilingual teachers in science and technology was conducted and a special recruitment of 1000 young bilingual graduates was launched by the Ministry of Public Service and Administrative Reforms, MINFOPRA in June 2017. Meanwhile, lecturers were also recruited into the eight state universities. Regarding the poor mastery of some subjects, the Ministry of Higher Education, in February 2017, created the Department of French Modern Letters at ENS Bamenda.

Concerning complaints on the sole use of MCQs as testing instrument into professional schools, the government, in July 2017, decided that, in addition to the MCQs, new examination instruments should be added. It also yielded to demands to create an ENSET for the Francophone subsystem to avoid a situation where more than 85 percent of student teachers in the Teachers’ Technical Training Colleges of Bamenda and Kumba are of Francophone background. The government moved further to create a Polytechnic in the University of Bamenda.

On the ambiguity that clouds the April 2001higher education law on entry conditions and qualifications for students, the government responded in October 2018 by increasing intake into HTTCs as well as admission of candidates into specialties of such schools in UB and UBa based on their certificates. Meanwhile, the harmonisation process for Master’s Studies in the state universities was completed in 2018.

Regarding the complaint about the very low state subvention to lay private and confessional schools, as well as high taxes imposed on education, President Paul Biya, in September 2017, ordered a special subsidy of FCFA 2 billion for the 2017 fiscal year coupled with an earlier budget of FCFA 2.3 billion taking the amount up to FCFA 4.3 billion.

The problem of frequent changes in textbooks and booklist from primary, secondary to high school was quashed with the implementation of the one-book policy since September 2017. Ongoing efforts to resolve some of the problems include the harmonisation of programmes for UB and UBa; the non-respect of section 16 (2) of law No 98/004 of 14 April to lay down guidelines for education; lack or shortage of qualified Anglophones in some domains of commerce.

The Post has closely observed that government is simply shelving one of the grievances that called for the GCE Board to henceforth organise competitive examinations into professional schools for candidates of the Anglo-Saxon subsystem of education, a system inculcated in them from childhood. This would avoid the aged-old tradition where Anglophone candidates are unjustly tested based on the Francophone subsystem of education.

To stem one of the complaints raised by Anglophone lawyers – that the OHADA law that regulates business in Cameroon was only in French – the justice Ministry, in November 2016, quickly translated the text to English and handed it to the President of the Bar Association.

The government also claims that robes and wigs that were seized from the lawyers during the peaceful street protests by the police were all returned in December 2016. It equally claims that the police officers who brutalised the lawyers were prosecuted in the same month.

The lawyers had requested for the creation of a special section at the Supreme Court to review appeals against decisions in English and, in reaction, government endorsed a law modifying the organisation and functioning of the Supreme Court with the introduction of the Common Law section. This was done in July 2017.

On calls for government to transfer Francophone judicial staff who donot master English, President Biya, who is also the Chairman of the Higher Judicial Council, in January 2017, ordered a census of Anglophone magistrates in view of increasing their number and the redeployment of magistrates following linguistic criterion. This was followed by a decree appointing Anglophone magistrates to posts of state counsel in courts of first instance and the High Court of Bamenda.

On the marginalisation of the Common Law, Biya, in December 2018, ordered the creation of the Faculty of Law and Political Sciences at UB, creation of Department of English Law in the universities of Douala, Dschang, Ngaoundere, and Maroua.

The teaching of Public Law in UB and UBa was effective. Government claims all these came on the heels of the harmonisation of the Criminal Procedure Code, CPC; even though its effective implementation is another story all together.

Concerning visits by lawyers to detained clients in police and gendarmerie cells, article 118 of the CPC that provides for freedom of all detainees to be visited by their lawyers or family members was evoked as a solution.

On complaints about the non-training of Anglophone magistrates in administrative and accounts litigation, it was disclosed that 10 magistrates of English speaking background took part in the training of judicial auditors at ENAM in 2020. Meanwhile, the reconstruction of judicial structures destroyed in the Southwest and Northwest began in 2019 with reconstruction works on the Tombel and Bali Court Houses respectively.

According to the government, Biya had instructed the re-organisation of ENAM to include a Common Law section in the school and work to that effect was engaged since September 2019. Other ongoing efforts to handle complaints by lawyers include projects such as the decongestion of prisons; support for proper functioning of the Bar Association; moves to create law schools for training of lawyers and notaries; and plans to recruit specialised interpreters to work in courts.

Many observers of what is happening in Anglophone Cameroon with the crisis deepening each passing day, are of the opinion that, if the plethora of concessions is yet to resolve the problems tearing the country apart, then the solution lies elsewhere.

Issues At Stake: When Free Readers’ Tribunal Slams The Establishment