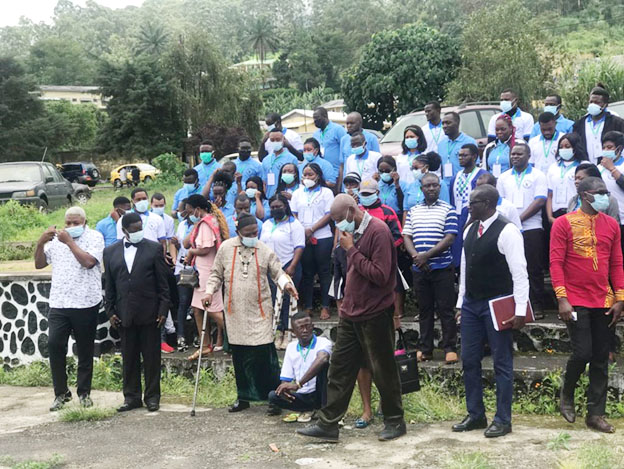 Over 150 youths from the Buea municipality have been schooled on youth citizenship and peace-building by the Southwest Regional Assembly.

This was during a seminar held under the theme “Civic Education for a Responsible Citizenship” organised Regional Assembly recently at the Multipurpose Youths Empowerment Centre, Buea Town.

At the start of the training, President of Southwest House of Chiefs, Chief Dr Atem Ebako, said there was a difference between the Regional Assembly and the Regional Council.

Chief Dr. Atem Ebako, who is also Vice President of the Regional Assembly, is tasked with bringing the youths together to uphold the Unity of Cameroon and work with them as a collective entity to achieve sustainable and meaningful developments.

For these objectives to be realised, he said there is a need to empower the youths with education to become responsible for peace-building, development, and national unity.  “Without education, our eyes will remain close to see what the government has for us,” he said.

He further asserted that youths are likely to get angry after schooling and there are no job opportunities.

He however affirmed that the Southwest Regional Assembly is doing everything to create jobs for the youths. But, for that to happen, youths must strive to become responsible citizens and also learn a trade and be creative to produce local products for their respective communities rather than importing from external markets.

The Seminar was centered on five modules which were all tilted to being a responsible citizen. According to one of the speakers, Raymond Chinda, Regional Pedagogic Inspector,  the Emblems are those facets that make a Country unique, identifiable and differentiate it from other countries on the globe.

He said it while delivering a talk about state emblems and their significants.

According to him, the first Emblem of a country is the name of the country which is the ‘Republic of Cameroon,’ explaining why Cameroon is a Republic and not a Kingdom.