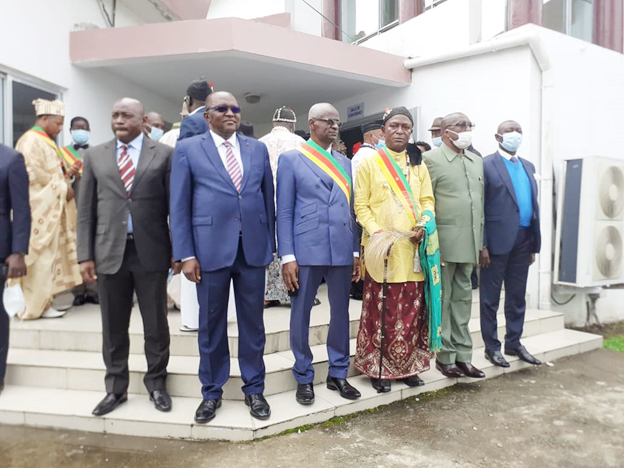 Southwest Governor, Bernard Okalia Bilai, has frowned at some local leaders in the Region, including traditional, religious, civil society and locally elected officials, on what he terms their hesitance to commit to their responsibilities in resolving the five-year-long Anglophone Crisis.

He said some of these officials are hesitating to assume mediation roles as per the recommendations of the 2019 Major National Dialogue, which expects them to dialogue with Separatist fighters and get them to lay down arms.

Governor Okalia Bilai made the statement on March 10 during an event at the Buea Mountain Hotel, where he presented a report on the activities of his administration in the Region during the year 2021.

“In numerous occasions, most especially during working sessions organised within the framework of the of the follow-up of the recommendations of the Major National Dialogue, we have called upon the elites and opinion leaders among which feature some influential regional councilors, to play their role of mediators towards these youths visibly misguided by ill-intentioned persons,” he said.

“Traditional and religious leaders, civil society members were also on countless occasions called during our sittings. Some of them are conscious of their responsibilities in the resolution of the crisis but are still hesitating to commit themselves to this task,” the Governor further remarked in his presentation.

He added that attaining peace in the Southwest Region, just like in the Northwest, requires the efforts of both Government and civilians in the Regions.

He said the “living forces of the region” need to “sensitise young misled Cameroonians who took up arms against their fatherland,” for peace to be attained.

The Anglophone Crisis has displaced most traditional and elected leaders in the Southwest Region from their localities, and most of them face security threats from Separatists operating in their communities.

Most of these leaders, whom the Governor has charged to work out the peace process, cannot even travel to their areas to pacify their people, not to talk of dialoguing with Separatist fighters.