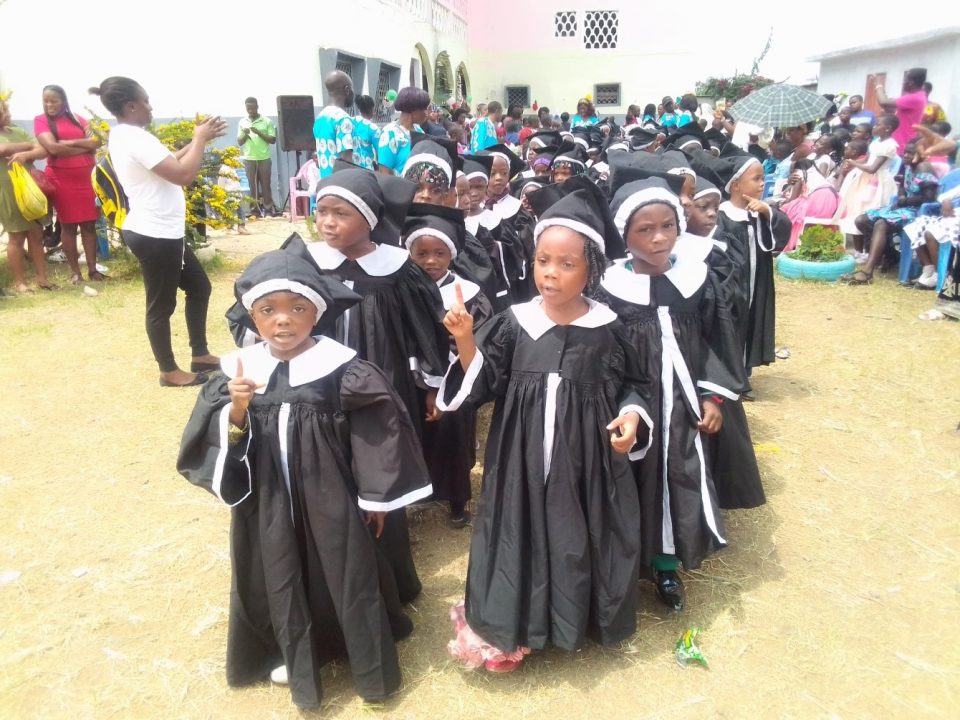 Located at Wonya Mavio, a crisis-hit locality in Buea, St Sylvester Bilingual Nursery and Primary School has remained resilient in providing quality education amid the Anglophone Crisis, graduating some 192 Nursery Two and Class Six pupils on Friday, May 28.

During the graduation ceremony at the St Sylvester campus, Wonya Mavio, the institution sent out 78 pupils from Class Six, 80 Nursery Two pupils and 34 others from Classes One and Two who failed to graduate in the last academic years due to the Anglophone Crisis.

The school, with a population of over 600 pupils, has stood its grounds in a crisis-hit neighbourhood, providing quality education that has made it “a reference point to other schools” according to George Bobga, the school’s Head Teacher.

He says managing over 600 primary school pupils was challenging given that most of them have not been to school for the past three or four years and so found it difficult to cope in school.

“Our society has affected the psychology of these children and most of them came here timid and some even frightened. We have done our best to build their morals and self-esteem which has been matured and boldness has been instilled in them, as timidity has been replaced with timidity and love,” George Bobga said while addressing dozens of parents at the recent graduation ceremony.

He told the press: “What we offer here is not what is being offered in other schools. We are like a reference point to other schools, because when you go round in terms of pedagogy we started with a new curriculum right during our holiday classes… Agriculture is part of the current curriculum and we don’t only teach it theoretically, we equally practice it. The school farm is there… we have plantains there, we have vegetable… we have other things that have been planted.”

According to Belter Limunga, a Class One teacher, insecurity has been a major challenge to teachers, but they have remained consistent in their job to impart knowledge.

Amid insecurity that kept most schools in Wonya Mavio and Muea areas of Buea closed, she says “we just did it, praying to God, but we were not safe. Coming to school… leaving your house with gunshots but we still come and teach these children – it was not easy”.

She added that some of the pupils “did not graduate due to the crisis we have in Cameroon but I’m really happy we are sending them out because we have given them what they can face the world with. Some of them had not been to school, they have stayed in the house for a long time and coming back the memory is gone”.

The school’s Founder and Proprietress, Dr Celestina Fru Tassang, announced during the graduation ceremony that they are reopening the St Sylvester College that was temporarily closed due to the crisis. To keep their pupils busy during the three-month summer holiday period, Dr Tassang said holiday classes will be organised in July to abreast learners with computer knowledge.

After Gov’t’s 2.7B Fails To End Teachers’ Strike, Biya Announces Other Measures