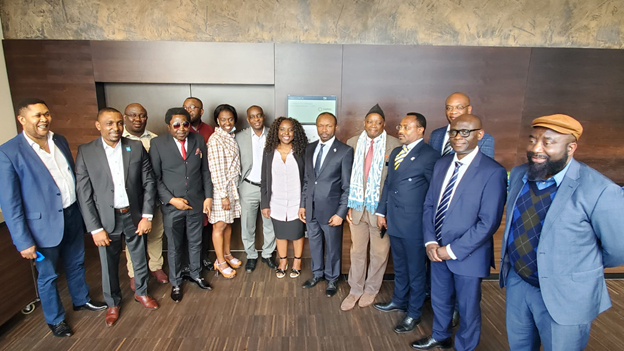 Leaders of Southern Cameroons groups, delegates pose for the camera after conclave

Leaders and delegates from the six stakeholders groups among others in the Southern Cameroons Struggle, converged on Stuttgart, Germany, March 11-13, 2022, and resolved to work together.

The Stuttgart conclave, which was hosted by the Coalition for Dialogue and Negotiations, CDN, was attended by leaders and delegates from the various groups, among them: Ambazonia Governing Council, AGovC; Ambazonia International Policy Commission, AIPC; Interim Government, IG-Care; Indigenous People of Ambazonia, IPOA-GovC; Southern Cameroons Civil Society Consortium, The Consortium; and Southern Cameroons National Council, SCNC.

The Southern Cameroons leaders’ summit, which held from Friday, March 11 to Sunday March 13, aimed to build on commitments made at Toronto summit in 2021.

A proclamation thereof, known as the STUTTGART STATEMENT, reads: “This Meeting, facilitated by the Coalition for Dialogue and Negotiations, CDN, was aimed at examining the state of advancement and challenges faced by our collective aspirations for the people of the Southern Cameroons (Ambazonia).

“We also discussed the condition of our refugees, internally displaced persons, and Ambazonia Prisoners of Conscience, APOC, and condemned the gross human rights violations against the people of the Southern Cameroons (Ambazonia). Within the spirit of the Toronto Declaration of November 1, 2021, we committed to continuously work as a collective and to put the people at the centre of our work for justice and peace in the Southern Cameroons (Ambazonia).”

Reacting after the meeting, Dr. Lucas Ayaba stated: “During these difficult moments in our Liberation quest, we may decide to continue in the same direction as though nothing is happening or make a conscious effort to listen, understand and eventually bridge the gap and heal the division between us. We take these steps to understand each other and avoid actions and attitudes that may be misconstrued. We have shown honesty and frankness that we hope will create an environment of trust.”

“This Stuttgart meeting has proven that we can bridge our differences without depending on the international community. It is work in progress and we are committed to pursuing this path because it is what our people want to see. The President has asked leaders of all movements to put the people first and that is exactly what the Interim Government is doing. We are stronger together and what brings us together is stronger than what divides us.” Dabney Yerima, Vice President of the Interim Government, whose President is Sisiku Julius Ayuk Tabe.

The Acting Chair of the SCNC, Prizo Agbor, and John Mbah Akuroh, President of the Consortium, joined all the Stuttgart delegates to call for more engagement and collaboration by all stakeholder groups and enjoined the CDN to ensure more leaders come together to achieve justice and peace for Southern Cameroonians (Ambazonia).

Judith Nwana, Chair of the Coalition for Dialogue and Negotiations, CDN, noted: “The CDN is committed to bringing all stakeholders together to constructively work towards achieving justice and a peaceful and sustainable resolution to the conflict in the Southern Cameroons.”

“The CDN is working hard to ensure Southern Cameroonians, both at home and abroad, can leverage their commonalities to achieve their aspirations. We will continue to work with all stakeholders, especially women’s groups to enhance collaboration,” Henry Atem of the CDN added.

Hamidou, Teacher Who Died Without Salary For 10 Years