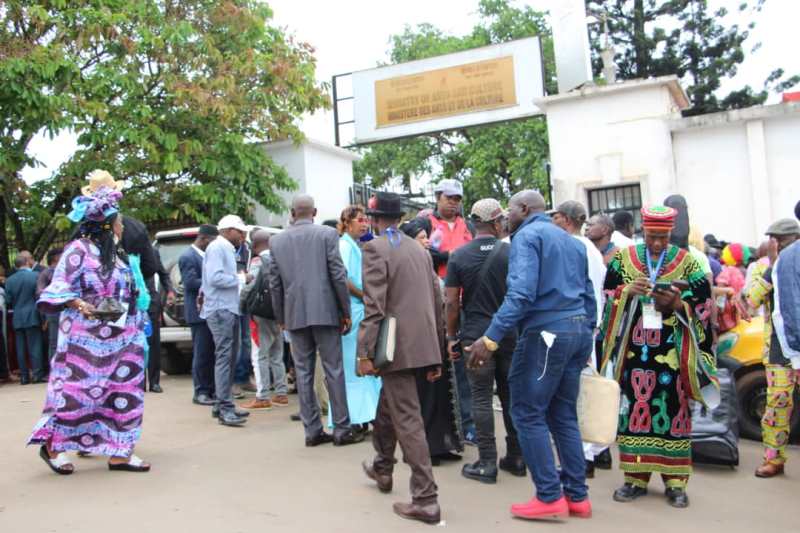 Musicians stranded in front of the Ministry

Some musicians in Cameroon who belong to the Cameroon Musical Rights Corporation, SONACAM, have accused the Minister of Arts and Culture, Pierre Ismaël Bidoung Mkpatt, for covering a mafia that has allowed some individuals to embezzle money meant for them.

Aside from the accusation of the Government not wanting to liberate musicians and creating confusion between SONACAM and Cameroon Music Corporation, CMC, they are furious that SONACAM General Manager, Dr Francis Ateh Ngong, aka Ateh Bazore has not been allowed to do his job properly.

According to the musicians, Ateh Bazore is the right man for the job but the government keeps toiling with SONACAM because Ateh is an Anglophone.

They aired out their frustration in Yaounde recently during the Assembly General Meeting that brought together over some 600 artists from the 10 regions of Cameroon.

“We condemn these treatments given to artists in Cameroon, and today is the liberation and day of reckoning,” said Joel Francis Atangana, an artist. “Whether the mafia is coming from which end, what we are saying is that we will not leave this place without a solution. It was the Head of State who sanctioned the elections. All of these are because it is an Anglophone who is the President General and they doing everything to put him down. This is not good at all. For the first time, an Anglophone is the president of SONACAM and we will stand by him. He will finish his five year mandate,” he added.

Other artists said they were “surprise that many people are against the holding of this AGM. Those responsible for blocking know exactly what they are doing because things are moving towards the positive end.”

“Why can’t they allow him to do his work? What exactly are those fighting to disturb this meeting aiming to gain or hiding?” one artist said “Is it because they knew that the truth was to come out during this meeting? We need to know the truth and we are ready for President Ateh to tell us the truth. He is just 15 months in office and he is doing a lot,” a musician said.

The musician believes that, that from all indication, the Minister knows the mafia that is going on and is not ready to solve the situation.

“I am beginning to believe that the Minister is in the camp of those who are ready to see that artists continue to suffer as we are doing,” one of the artists said. He added that,  “We know people have embezzled a lot of money and we want to expose them but see what is happening. Besides that, we were supposed to see the balance sheet of what those in office have done and take the next step.  Look at what is happening in other countries, why can’t we copy their example and let us grow? We are tired of these suffering and ready for the change. Enough is enough.”

The artists, despite banning, braved the courage and held AGM in front of the Ministry of Arts and Culture.

Going by the resolutions of the meeting, artists unanimously took note of all the actions that some members of the Surveillance Council and Ethics Committee carried out to stop the holding of the general assembly.

While also taking note of the fact that there was an attempt to break in and destroy the head office on April 6, 2022, the AGM mandated the Board of Directors to take any measures that can help to solve this problem once and for all.

They also approved the 2022 budget and in addition took note of sanctions that were pronounced during the year by the Ethics Commission.

Besides the resolutions taken during the AGM, The Post also gathered that, after a meeting between Minister Pierre Ismaël Bidoung Mkpatt and SONACAM and the Cameroon Music Corporation, CMC, officials of SONACAM reportedly refused the proposition of merging the two structures.

During the meeting in the Ministry, the President of SONACAM, Francis Ateh Ngong Aka Ateh Bazore was accompanied by Tony Ngong and Joel Francis Atangana representing their association while Sam Mbende, Jean Pierre Essome and Ambroise sat on behalf of CMC.

Some 696 artists who came from all the 10 regions were present representing 62.62 percent of the 1,097 of the artists who were expected to take part in the meeting.

Build Up To AGM

According to Sciprano Kibungla, member of SONACAM, the date of the AGM was announced by the Minister some two weeks ago after the holding of several meetings. Going by Sciprano Kibungla the Minister was on the opinion that it was time for all the five authors’ rights companies hold their general assembly meetings.

“…Days were distributed and SONACAM general assembly was programed to take place on April 14 at the National School Administration and Magistracy, ENAM Hall. As we were busily preparing for the meeting, news reached us on April 13 that the general assembly meeting has been cancelled.” Sciprano Kibungla said.

“We were like, how can a Minister schedule a date for the general Assembly meeting and the Divisional Officer of Yaounde III, Serge Herve Biwele, as well as the Director General of ENAM, Bertrand Pierre Soumbou Angoula, cancel the meeting? We didn’t know what was happening,” he said.

The Post further gathered that Achille Mbanga, one of the artists, visited the DO presenting a document that the meeting has been cancelled. The DO is said to have been told by those who presented the document that if the meeting is allowed to take place, it was going to cause public disorder.

According to information that filtered into The Post newsroom, the general assembly meeting was cancelled less than 24 hours to time.

At the time of the cancellation, artists from different parts of the country, especially those from the Northern regions as well as Northwest and Southwest and other regions were already on their way to Yaounde.

However, the AGM is said to have been authorised on April 7 by the DO of Yoaunde III giving assurance that preparations could be going on. It was only on April 13, a day to the AGM that Serge Herve Biwele signed another note No. 044/AS/J06.03?BAAJP Du 13 April 2022 canceling the meeting pointing public to disorder as the reason behind the sudden move.

On his part, the Director General of the ENAM, in a letter addressed to Joseph Mbanga, took note of the DO cancellation of the meeting and requested the authorities concerned to come and collect the money they had paid for the hall.

The Board of Administration had on the same in a letter No. 00241/PCA/SONACAM/22 written to the Minister of Arts and Culture to get clarification of on why the AGM was canceled.

The board raised the problem of displacement of artists from all the ten regions, the moral of the association as well as the constraint in finance. At the time that The Post went to press, the reply from the Ministry was not yet available.

AGM Held In Front Of Arts And Culture Ministry

As early as 7:30 am that day, artists were already present in front of the Ministry of Arts and Culture. The gates to the Ministry were locked as only cars were allowed to get in. At around 9:00 am, the environment was full, as all the 10 delegations from the ten regions had arrived.

When the National President of SONACAM, Ateh Bazore arrived, he called on the artists to stay calm as a series of meetings were said to be going on to give a green light to the situation.

Immediately, artists initiated prayers after singing calling for God’s intervention. Shortly after that, the national anthem was sung and discussions follow suit.

While some immediately composed songs calling for the liberation of artists and their money, those who could not resist the scorch sun fled for shelter. Some sat beside the entrance of the Ministry waiting anxiously for good news to filter out.

In the meantime, they insisted that they would not leave until their demands are provided meaning that, even if the meeting was to hold in the night in front of the Ministry, they were ready to do that. At around 7:00pm, they held the AGM and waited for President Ateh Bazore to come out following the meeting with the Minister. When he came and announced that he rejected the proposition of fusion with CMC that the Minister offered, artists jubilated.

As Christians Celebrate Easter: Priest Insists Christ Died For All Mankind, Not Only Christians