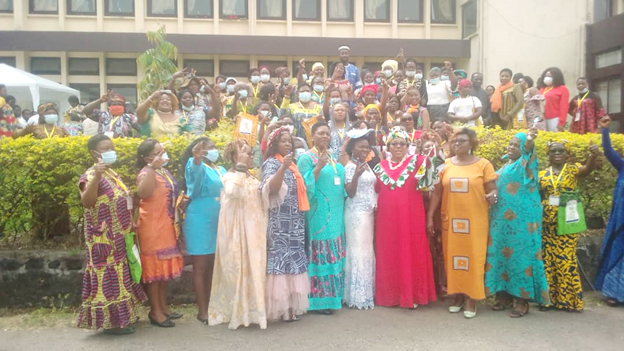 Members of the Southwest and Northwest Women Task Force, SNWOT, have been drilled on ways to restore peace in homes, communities and the entire nation, during a workshop held in Buea on December 15.

The event was sponsored by the Canadian Embassy in Cameroon and the National Women´s Convention, which has representatives in Southwest’s six Divisions.

According to Serah Efossi Lifanda, SNWOT Southwest Regional Coordinator, the convention was initiated by Cameroonian women backed by the Canadian Embassy, which gathered the women from the ten regions to seek ways to restore peace.

The training in Buea was a fall out of the Women’s convention that held in Yaounde some months back.

Since all women could not be in Yaounde, Serah Efossi said it was incumbent to decentralise what was done in Yaounde to the grassroots women in the region while stating that only genuine dialogue can solve the problem. To her, peace does not mean the absence of war.

The convention, she said, aimed at making every woman to understand and know her role in peace building because, “Peace building is not for a few but for all and for us to be inclusive”.

SNWOT believes that every woman must be part of the peace puzzle and, as women, the association builds peace piece by piece and, when these pieces comes together, we will have a full blown peace,” said Serah Efossi.

Women and female children are among those highly hit by the Anglophone Crisis. Some have been gruesomely executed by belligerents in the conflict.

SNWOT thinks women still remain veritable partners in finding lasting solutions to the crisis, despite the atrocities meted on them.

“We women are nurturers,” Efossi said. “It is time for women to come on board to compliment the men in what they are doing.”

To her, it is their role to make every woman understand their part in peace building especially in their homes, communities and country as a whole.

While training them on the importance of dialogue, urging them to talk to their children to leave the bushes and also to participate in peace making, the women were called upon to share their experiences living the conflict.

Esther Omam, Reach Out Executive Director, was the keynote speaker at the come together.  She said the first National Women´S Convention that held in Yaounde brought together 1,500 women, yet it was not enough because many women back at home were disappointed that they were not part of it.

To her, “that is why the convention was brought at the doorstep of the grass root area”.

Some of the things women were taught and reminded of the normative framework for women´s peace building; the importance of genuine dialogue for conflict resolution; gender based violence within the context of the crisis and trauma healing.