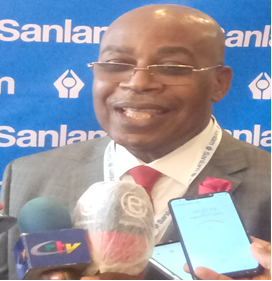 The insurance company formerly known as Saham has officially changed its name to Sanlam Cameroun. The change of name took effect from June 1, 2021, all over Africa where they operate including Cameroon.

The announcement was officially made during a press conference at the Yaounde Hilton Hotel on June 1 by the top management of the company notably CEO of Life Insurance, Théophile Gérard Moulong, and the CEO of General Insurance, Cédric Viallet; all of Sanlam Cameroun. The duo presented the legal, operational and the marketing identity of Sanlam Cameroun to the press.

Moulong disclosed that the change came following the acquisition of Saham Finance in October 2018 by Sanlam Group – a Panafrican financial group of reference. “Sanlam is a group of financial services inscribed on the Johannesburg and Namibia stock markets. Founded in 1918 as a life insurance company, the Sanlam group based in South Africa; later transformed itself into a diversified enterprise of financial services.

He said the company has products designed to suit personalised needs of individuals and institutions in all the segments of the market notably Sanlam personal finance; Sanlam Emerging Markets; Sanlam Investments; Sanlam and Sanlam Corporate. “The expertise domain of the group is life insurance and general insurance; financial engineering; retirement; investments and management of heritage,” Moulong told the media.

The CEO of Life Insurance said the two components in Cameroon happily belongs to the secular group, Sanlam which is an undoubted leader of financial services and the first insurance group in Africa found in the four linguistic spheres of the continent notably Anglophone, Arab, Francophone and Lusophone. He said the group operates through 200 companies in 43 countries with 33 of them in Africa.  He added that the international dimension of the Sanlam group is reflected in its financial strength notably 19 billion USD in new businesses, stock capital of 9 billion USD and operational results giving 930 million USD before fiscal deductions.

On his part, the CEO of General Insurance of Sanlam Cameroun, Cédric Viallet said the setting up of the company in Cameroon is in line with the strategy of the group which is based on fostering a unique and strong mark across the continent. He said the rebranding move is geared at creating value for customers as well as sources of growth hinging on the synergy and experience of the group.

He talked about the significance of the logo, the communication strategy to drive home messages and the digitalization of their services. He said customers through the new digital method of management, wherever they are, would be promptly served within a period of 24 hours.

Moulong and Viallet said the direct and indirect jobs linked to the company as well as all the insurance policies with the former company are all intact despite the change of name. They expressed their determination to make in roots in the country and urged the media to keep the public informed that insurance involves all and sundry and do not therefore concern only a category of persons or institutions.