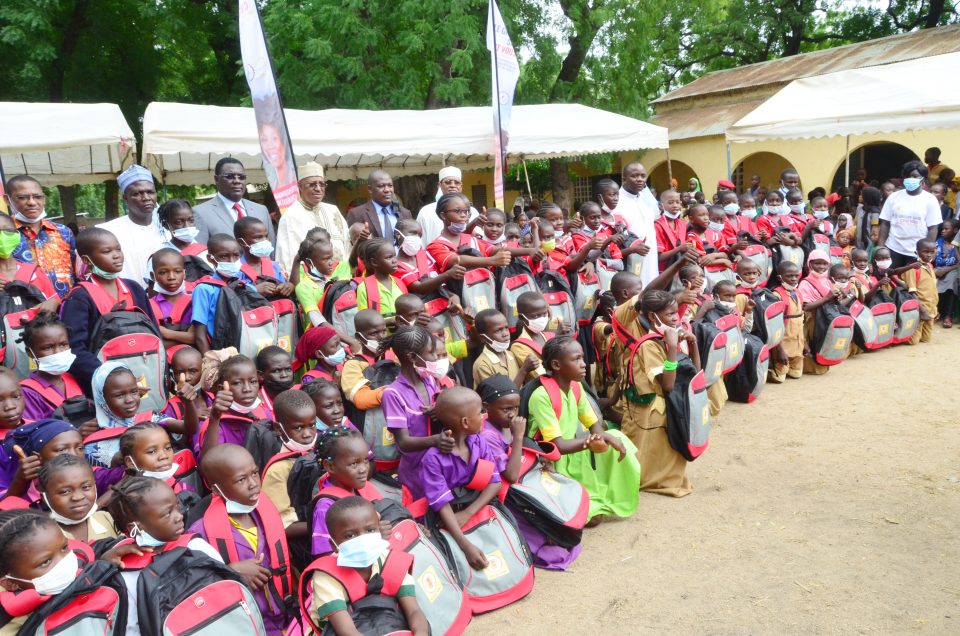 Cameroon’s citizen friendly enterprise, Les Brasseries du Cameroun, generally known by its acronym, SABC; has showered pupils and students of the North and Far North Regions with 500 scholarships to enhance their performance during the 2021/2022 academic year. The beneficiary pupils and students are those who academically stood out in their classes in 2021.

The SABC 2021 school excellence programme rounded off on September 25, 2021, at the Lay Private School,Les Hirondelles of Garoua during a ceremony at which 250 scholarships were handed to the best pupils and students of the North Region.

This was preceded by a similar ceremony on September 22 at the Government Primary School Founangue in Maroua, Far North Region in the presence of the Governor,  Midjiyawa Bakari; the SDO of Diamaré Division; the City Mayor of Maroua; officials of the SABC as well as traditional authorities. Best pupils and students were handed 250 scholarships, bringing the total number of scholarships for the North and Far North Regions to 500.

Talking to reporters on the sidelines of the event, the Governor said he was happily satisfied with the offering of the scholarships as he called on others to follow the good example of the citizen friendly enterprise, the SABC. Midjiyawa remarked that the Far North is a region of peculiarities, especially as they are virtually coming out of the havoc caused by Boko Haram, the greatest enemy to schooling.

He said, apart from under-scolarisation, the Region is also having so many poor and underprivileged people; children of the displaced; refugees as well as those who just left Boko Haram prisons.

“We must, therefore, work in solidarity where everyone contributes his/her quota to enable the children attend school. I talked about inclusive education and we are having many children here that are mentally, visually and morally deficient, the disabled; the dumb and so on, who all have rights to education. The expectations are high but the means is limited and that is why I am reiterating on others to join the SABC in order to enable us meet up with the challenges,” Governor Midjiyawa appealed.

Declaring to the reporters that he was highly joyful, the Head Teacher of the Government Primary School Founangue, Yougouda Govong, said the scholarships would instill a spirit of hard work and competitiveness in the children as each would be fighting to be the first in the class.

“If these scholarships are offered regularly, I assure you that we shall produce the best from here. I will continue to insist to the pupils to take their lessons seriously. We are extending big thanks to SABC for the gesture and, at the same time, asking for more,” Yougouda stated.

The North and Far North laps of the scholarship award ceremony were preceded by others where the SABC caravan also moved and handed items to best pupils and students in Douala and Edea; Bangangté and Dschang; and Ebolowa and Akonolinga. In total, the SABC has offered 1,500 scholarships for the 2021 school excellence programme to the best pupils and students in the towns and cities that were chosen following a draw by officials of the enterprise and some journalists. The kits contained a school bag (sac à dos), all textbooks on the school programme available in the market and a water bottle.

In a press kit, it is noted that the programme, which targets pupils, students, educators, head teachers and parents on the one hand, and administrators, opinion leaders and the media on the other; is geared at providing support to parents on the eve of school resumption. It also enables the SABC to assume its societal engagement in the domain of education; sharing of their vision, mission and values with the public as well as bringing hope and happiness to the beneficiaries.

The SABC, that has been promoting sustainable investment in education for over 70 years, has a strategy based on five main priority axes of sustainable development, notably: education, health, environment, sports, arts and culture.

Created in 1948, the SABC Group is made up of four enterprises with each being a leader in its domain in Cameroon. They are Les Brasserie du Cameroun, an agro-industrial leader; SOCAVER with expertise in packaging; SEMC specialised in mineral water and CFC whose goal is boosting the agriculture and animal production sector.

The SABC’s mission is to remain the regional agro-industrial leader of reference in the production and commercialisation of beverages in a performable, profitable, modern and citizen organisation while their mission centres on assuring availability and constant quality of its products at the best prices and through a performable distribution network service to its customers, while respecting the environment and its societal responsibility. The SABC values are; performance, responsibility, integrity, loyalty, professionalism and innovation.