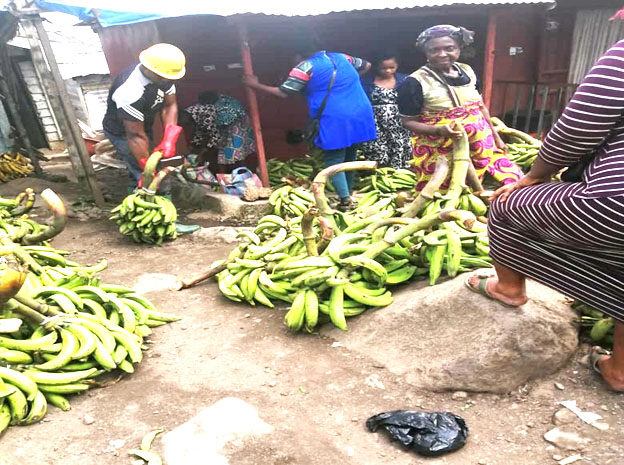 Many Buea inhabitants are complaining bitterly about the prices of foodstuffs which, they say, are increasing daily.

Hardly is there any explanation made for this continuous increase which has never been reduced.

The Post toured some places in Buea dealing with food crops, especially plantains, to get the full picture.

In front of Government Bilingual Grammar School, Buea, some students who rely on pantain chips, said the price is the same but complained that the quality and quantity have reduced these past few days.

The students said they love plantain chips because they can easily eat in class when they feel hungry, “even though the sizes have reduced a lot, but we will continue to buy it.”

We equally visited OIC market located at Great Soppo, where we observed how suppliers and retailers of plantain deal. Some consumers came to buy plantain, but to their greatest surprise, the prices had increased, even though it is plantains season which are cultivated mostly in the Southwest Region.

A plantain roaster, who identified herself by her popular appellation, Mami Plums, said the hike in plantain prices resulted from those buying to sell in Douala.

“The buyers in Douala told us, as schools reopened in Douala, the demand has greatly increased, especially by those selling plantain chips,” she said.  She added that she only buys plantains because she roasts plum, as most consumers like to eat plum and plantain, even if it costs FCFA 250 for one.

Alice Tabi, a supplier of plantains, said this is plantain season, as they buy cheaper from the producers in Muyuka but increase the prices when they reach Buea. This, she said, is because of the risk they go through on their way back.

“We equally pay taxes to those boys in the bushes, as well as to the control security. The crisis has greatly influenced an increase in the prices to this plantain, as we pay tax to Amba boys, pay people to load the plantain in their cars, the issue of bad roads, the issue of back-to-school as these boys will close roads in those areas to prevent children from going to school this year, living us stranded in the bushes for days,” Alice Tabi said.

Most sellers say, even though people love plantains, they are not out for charity, because they sell to make profits and not losses.

Most plantain sellers are calling on the Government to do something about the crisis so that plantain prices can reduce.

Issues At Stake: No Victor, No Vanquished!

Issues At Stake: When Free Readers’ Tribunal Slams The Establishment