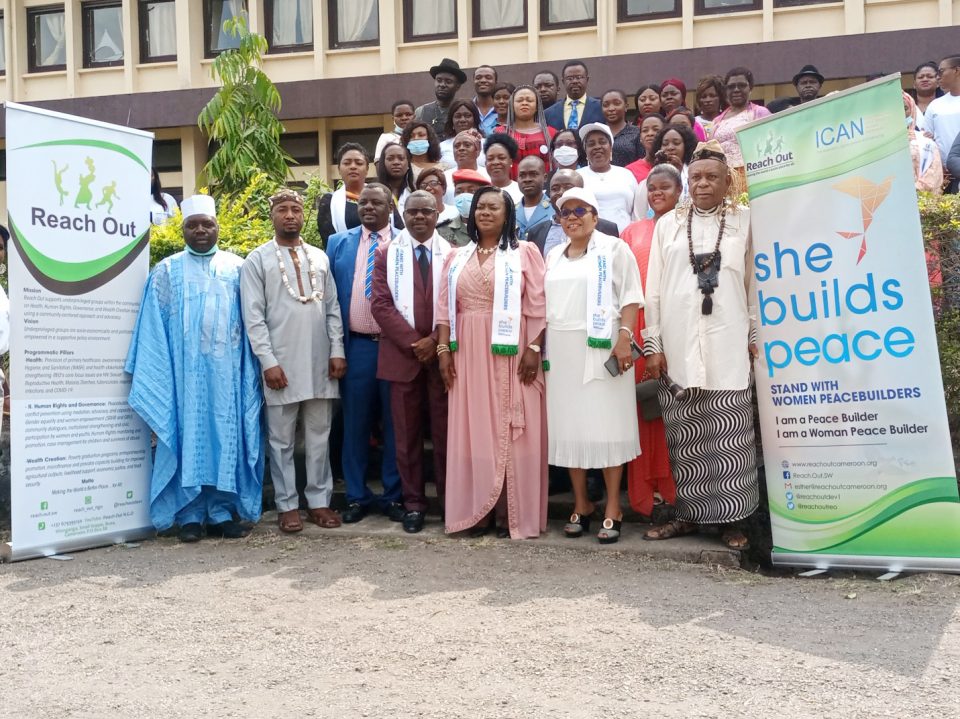 Reach Out, Religious, Security and Administrative Officials pose for a family picture

Reach Out, a well known Non-Governmental Organisation based in Buea, Cameroon’s Southwest Region, recently gathered women and girls alongside other stakeholders in the ongoing Anglophone conflict to promote a peace agenda.

The programme launched in Buea will use media spaces to mainstream peace. Holding in partnership with a global movement – the International Civil Society Action Network ICAN for women’s rights, peace and security, it trumpeted the role of women in fostering a return to peace.

Holding under the theme: “She Builds Peace”, stakeholders were urged to stand with women peacebuilders.

According to Esther Omam, Reach Out’s Executive Director, “She Builds Peace” means that woman should admit the odds, still brave the courage to go out there and champion peace actions.

The ceremony, she said, was to localise or populate the “She Builds Peace” concept in the Southwest.

“Women have been doing a lot in peacebuilding processes without recognition,” Esther Omam said. “There was a need for us to come together and loud our voices.”

Given the Anglophone crisis, she said, “Women have committed to being at the forefront of all spaces, dialogue platforms which talk about peacebuilding”.

The launch brought, not only women, but religious leaders, CSOs, and security operatives in the region. Experts on peacebuilding dwelled the participants on various ways women can promote and build peace.

One of those who spoke to the women is the Southwest Regional Delegate of Women Empowerment, Lucia Dipita, who said the crisis has affected and rendered some women vulnerable.

According to her, the government is part of this process of peace.

“There is a lot of harm as far as this crisis is concerned,” she said, adding that, “Many women are out there and they have become vulnerable”.

To the Regional Delegate, it is the woman who suffers the most. “The government is doing everything possible” to foster projects that go a long way to help women and vulnerable girls.

Aside from just helping women, the initiative is also advocating for the women to be given rights so that they can help in also bringing peace to the conflict-rocked regions.