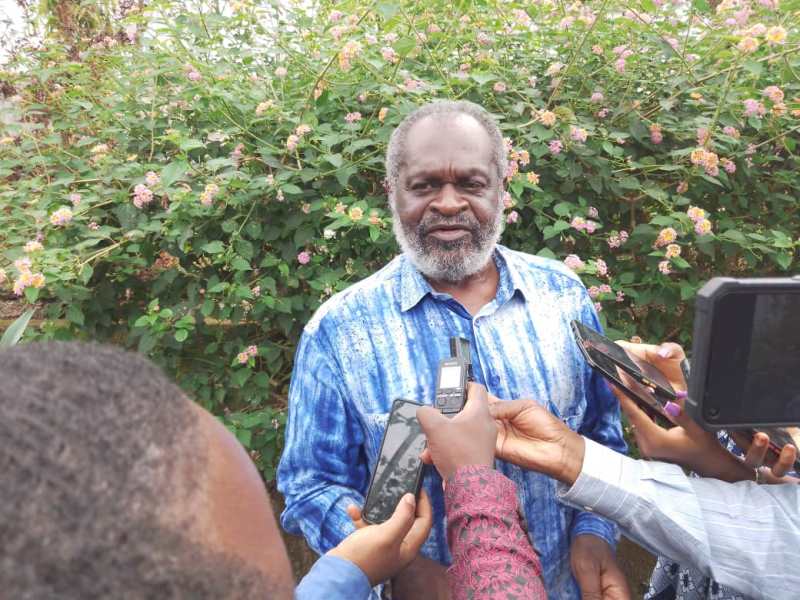 Emeritus Professor of Law of international repute, Professor Ndiva Kofele Kale, has published yet another book titled: “The Past as Prologue – Essays on Cameroon 1980 – 1995.”
Speaking at a press breakfast he offered Reporters at his Mokunda Buea Residence, Prof Kofele Kale said the book is his own contributions to make Cameroon a better place. He was accompanied by his younger brother, another Professor, Prof. Macdonald Kale, who taught Media Law in the State of Pennsylvania, United States of America, USA, and also spent a lot of time in United Arab Emirates, UAE.
Prof Kale’s latest book, with a forward by senior journalist, Sam Bokuba, is the collection of essays written by Prof. Kofele Kale between 1980-1995 and published both local and foreign newspapers and news magazines.
The essays, put vis-à-vis with what is happening in the Cameroons today, especially the Anglophone Crisis, were rather so prophetic. Had they been taken with the seriousness that they virtually begged for, Cameroon would have been at peace with a lot of political, economic and social development today; and not clogged by the multi-facetted crises.
Prof. Kale whose essays cross over from the Ahidjo and Biya regimes, instead viewed as a citizen seeking the betterment of his country, was rather seen as “subversive” and “unpatriotic.” His derring-do was unmatched as persons who were termed subversive and unpatriotic kind of earned time in dark, creepy and sleazy detention centres of both regimes.
Hear him: “It is a collection of essays. I call all them essays, actually, there are articles, interviews, speeches, addresses and letters to the editor. There are 14 of them; the first three were written in 1980 – about 42 years ago – and the last 11 of them in the first 13 years of Mr. Biya’s reign. They are very controversial – though that was not the intention – but they turned out too controversial. Official Cameroon (Government) wasn’t particularly pleased with some of my comments. The first one was the “President for the 5th Term.” That was when the CNU congress met in Bafoussam and proposed that President Ahidjo should run again for the 5th term and I thought it was a 5th term too many.”

For those who read Prof Kale’s essays then, the book, as a collection of the essays is a good reminder and as relevant as they were then and now. For those who never read his essays, the book offers good and reliable knowledge of the past and a guide for the present and future.
The book is dedicated to: “ … the memory of my childhood friend and brother, Michael ndiva Njoh Ifase (´Pro Jacks´), and two iconic journalist, Sam-Nuvala Fonkem and Francis Wache, whose contributions to journalism are forever burnished on the Cameroonian media tapestry. May their gentle souls rest in peace.”

The Pracademic & Writer
Ndiva Kofele Kale practised Corporate and Securities Law in Chicago at Lord, Bissel and Brook (now Locke Lord LLP). He has litigated a number of human rights cases around the world and served for six years as the Associate Editor of The International Lawyer (the flagship journal of the International Law section of the American Bar Association). An expert on grand corruption (patrimonicide) as a crime under international law, Prof Kofele Kale has written extensively on this subject and he is the author of eight books and over 40 referred articles in academic/professional journals, some of which address the socio-political and economic situation in Cameroon.

Understanding How Titles Have Relegated Women To Back-Burners In Cameroon