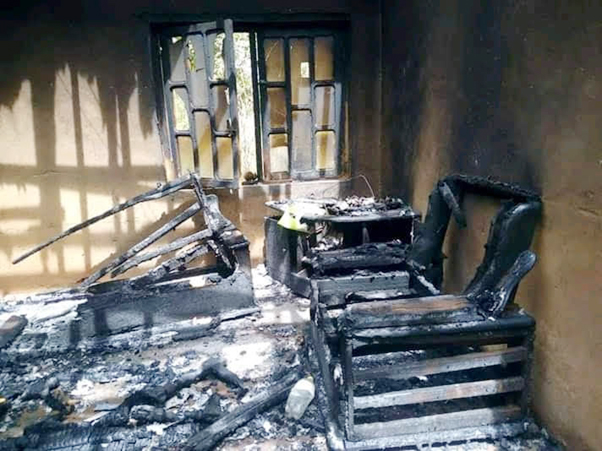 Damage left behind by inter-community attack in Wum

Cameroon’s President, Paul Biya, has been petitioned by Aghem Family and Development Association in North America (AFADA-USA) to “act swiftly and decisively against Aku-Hausa youths, civil administrators, and military officers involved in the 2019 and 2021 targeted killings of indigenous peoples of Aghem in Wum,” Menchum Division of Cameroon’s Northwest region.

The petition addressed to the President, a copy of which The Post got, accuses administrators and military command in the area of aiding and abetting Aku-Hausa youths to carryout hate crimes against the indigenous Aghem locals. The letter detailed that, in such attacks of the Aghems, the military, which is present in the area, takes no deterrent measures, and has rather been seen acting in a seeming collaboration with the rampaging Hausa youths.

“We of AFADA-USA are alarmed and disheartened by the repeated heinous and targeted attacks on the peace-loving and hospitable people of Aghem by Aku and Hausa youths in recent years with the tacit approval of administrative and security officials,” the letter states.

Citing some of the recorded incidents, AFADA-USA told Biya that: “On 18 October 2021, the world witnessed inexcusable and targeted killings as Aku-Hausa armed groups attacked the indigenous people of Aghem, destroying their properties. According to reports from local witnesses and victims, three Aghems were brutally killed and dismembered, three were seriously injured, and several persons remain unaccounted for. Additionally, nearly seven contiguous villages experienced looting, and there was a burning of 35 residential homes and 16 business premises – including individual property, leaving at least 254 persons homeless.”

While noting that material losses due to such attacks is estimated at over FCFA 80 million, AFADA-USA said two palaces have been destroyed and that the human loss cannot be qualified in monetary terms. In a statement after the petition, the AFADA-USA stakeholders revealed that they also attached photos, videos and reports that give first-hand information of what transpired in the area.

“Attacks by armed Aku-Hausa groups have become more strategic and well-coordinated. The first genocidal crime was recorded in 2019 when the same armed Aku-Hausa youths attacked Aghem indigenes resulting in at least 24 deaths, 52 maimed citizens, and the disappearance of several citizens,” the letter revealed.

“Ensure that there are no further attacks on the indigenous people of Aghem, their businesses, and property, palaces of traditional authorities, or sacred ancestral objects; Arrest, prosecute, and sanction the known perpetrators of these heinous crimes and criminal behavior who are currently still freely roaming the streets in Wum; Law enforcement services should investigate the hidden instigators and perpetrators of the acts through established legal channels and should prosecute those found responsible; Rapid compensation and rehabilitation of surviving victims and survivors of deceased victims; Current military leaders and civilian administrators in Wum who have enabled this carnage should be transferred out of Wum.”

In early June of 2019, shocking videos surfaced on social media, showing Cameroon government forces giving the green light for armed militias, who identified themselves as Mbororos and Muslims, to go on, burn, and kill mothers of those termed Amba boys in Wum Subdivision.

Videos of that particular incident later surfaced, showing houses burnt to the ground. The Palaces of Naikom and Waindo were also torched. Another video showed a man who has been set ablaze, with part of his skin, peeled off by the degree of burns he suffered.

It reportedly stemmed from an attack on some Aku-Hausa individuals by separatists and, in retaliation, the Aku-Hausa youths targeted the local Aghem from whose community they claim the Separatist fighters are from.

Since then, several other incidents have happened, where local Aghems are attacked by the Aku-Hausas. Before the Anglophone crisis, there existed conflicts between the Aku-Hausa grazers and native Aghems over land issues and other farmer grazer conflicts. With the coming of the armed crisis and with the administration looking for allies in places where they are scarce, it has seemingly opted to use the existing conflict to its advantage, by either  pitting the two people against each other, or paying a blind eye to their conflict.

Gov’t Gears For Another Population Census After Years

End This Senseless War And Stop The Ridiculousness