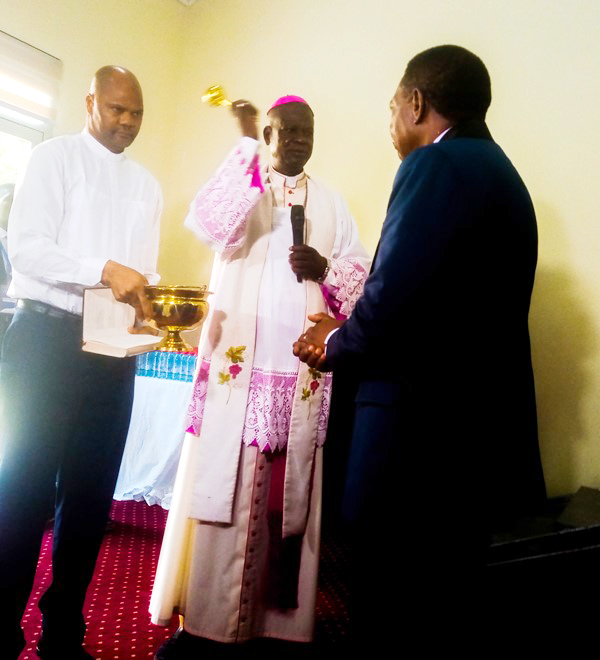 Diplomats, religious top brass, the media, friends and well-wishers on Friday February 25, came together in Douala to celebrate Ntumfor Barrister Nico Halle’s life which has been marked by service to humanity, crusades for social justice, fight against moral and other nation-killing vices, and which in the process, earned the Barrister several awards and distinctions both nationally and internationally.

The event hosted at Sawa Hotel in Douala was also marked by a mega magazine launch. The launched magazine titled, “Journey Through Ntumfor Barrister Nico Halle Award Gallery”, contained a compilation of over 160 national and international awards the justice crusader and legal luminary has received in his over three-decade career. The Award Gallery is compiled by Teneng Lucas Chefor, and annotated by Gwain Colbert Fulai. It contains Awards, Certificates, Recognitions, and Trophies received from the media, religious bodies, and other national and international bodies.

In his welcome address at the event, Organising Committee Chairman, senior journalist Joe Dinga Pefok told those who had come to celebrate Nico Halle’s life that the event was about celebrating God’s Grace in the icon’s life, and as such, was themed on reflecting on the life and ways of Ntumfor Barrister Nico Halle. He also emphasised that the award gallery contains 160 awards, and that the number is limited only to those awards accepted and received by the legal luminary. He pointed out that there were several other awards which were proposed, or awarded to the Barrister, but he turned them down, when he discovers that the awards were not genuine or that the body or institution awarding them was doing so because they had ulterior motives hidden behind the award.

Teneng Lucas, one the brains behind the event in Ntumfor Barrister Nico Halle’s over three decades of career life, the legal icon has successfully transformed himself from a personality, into an institution. He said after several tries, he and others pressurised Nico Halle to celebrate God’s grace in his life, and most importantly, produce a magazine that will enable posterity to journey through Ntumfor Barrister Nico Halle’s Award Gallery. He said such an event was necessary, because it gives everyone a chance to celebrate Ntumfor Barrister Nico Halle when he is still alive with them, so that he too can feel the impact and share smiles with those whose lives that have been touched and changed by the works of the legal icon and social justice crusader who garnered so many awards and distinctions from impacting positively on the community and nation he loves and serves.

Giving a comment at the ceremony, the Publisher of Eden Newspaper in Limbe, Chief Nzoh Zachee Ngandembeu described Nico Halle as a gift to humanity. The publisher said Nico Halle through his sublime and humble figure has brought peace in several avenues. He said he has witnessed how in his over three decades of service, Ntumfor Barrister Nico Halle has stood tall, guided in all he does, by his very strict moral standards.

He said as a lawyer, Ntumfor prioritised bringing peace among warring factions or person, instead of gunning to win the case at all times. He said as a peace crusader, and champion of social justice, the legal icon understood that society benefits more, when two person sit together address their differences and resolve them out of court, than when one party jubilates after winning a court case and then the two starts living a life hating each other. Nico Halle is hailed for championing such causes, especially when the persons involve in a dispute are relatives or friends. The method, those who are versed with Ntumfor say, did not only end at solving the issue among the aggrieved, but also saving their relationship.

I am Celebrating God, Not Myself – Ntumfor Barrister Nico Halle

Ntumfor Crusades For Social Justice, Love For Nation, One Another

Speaking on the need for peace, the celebrated peace crusader asked those who came to celebrate him, to respect the greatest commandment, which is about loving ones brother or neighbour the same way one loves himself. He lamented that unfortunately, many persons do not love their brothers the way they love themselves, and that it has caused the several ills plaguing society.

Ntumfor chastised some public officials whom he said judging from their deeds, they have no love for the country. He also chastised many whom he says pretend to preach peace, but are leading when it comes to preaching hate speech. He said some public officials move around preaching peace and justice and are the very ones who steal public funds, bring suffering and push many to face the extremes. He told them to stop pretending. “You cannot have a good attitude and you are a thief”, he said. He regretted that with Cameroon’s wealth, the country can conveniently take care of double its present population, but has been high jacked by a few unscrupulous officials.

The event was attended amongst others by the Archbishop of Douala Archdiocese, Mgr. Samuel Kleda, Diplomats from Nigerian High Commission and Nigerian Consulate, Executive President of the CBC, Consul General of India to Cameroon, Fons and Chiefs from the Southwest and Northwest regions, and Secretary-General at the Littoral Governor’s Office, representing the Governor.

I Have Forgiven All Those Who Tortured Me For 17 Years –Prof. Titus Edzoa