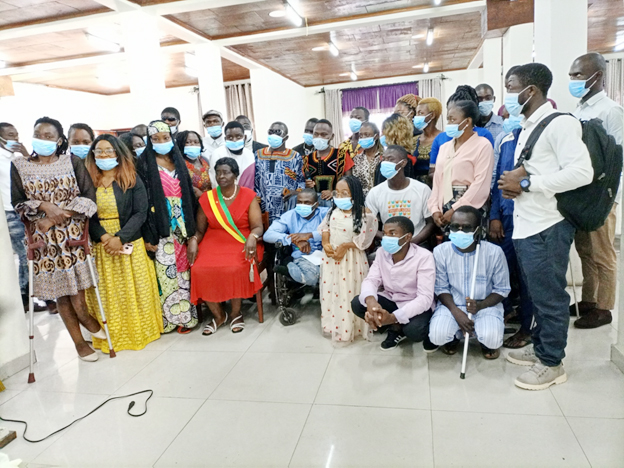 Over the years, persons living with disabilities, PWDs, in Cameroon have always felt marginalised when it comes to inclusive leadership in the country.

And as such, some non-governmental organisations that do come up to advocate for the rights of PWDs still end up exploiting them.  These, coupled with ignorance, have further made some PWDs reticent to take up leadership or even champion for disability inclusion in Cameroon, which is still far-fetched from becoming a reality despite the laws in place.

However, the narrative is poised to change. For the first time, Youth leaders who are persons living with disabilities have teamed up to champion their rights by gunning for skills that will equip them with the knowledge to do so.

This was during a two-day workshop that was held in Buea from Friday, May 6, to Saturday, May 7, under the Tam Tam Leadership Development Programme organised by Hope Social Union for the Visually Impaired, HSUVI. The programme is being sponsored by the United States Embassy in Cameroon.

The project brought together 22 persons living with disabilities and of different categories of disability from all the ten regions of Cameroon.

The training was aimed at empowering PWDs to become champions of disability inclusion in their different communities.

With at least two representatives from each Region, the participants received skills that they will further disseminate to their peers in their respective communities targeting over 140 persons.

“Because we will not be able to attend to 140 at a time, we want to train these trainees to have the requisite skills on leadership and modern technology,” said Kesah Princely, Tam Tam Leadership Development Project Coordinator.

“if they don’t have what it takes to have access to opportunities and resources, then this training will be meaningless.”

According to him, the participants were drilled by six facilitators who have expert knowledge on issues of disability like disability and accommodation, communication, social media, and leadership style among others.

“Remember, this is thanks to the US Embassy. They provided us with the resources to be able to have this done,” Kesah Princely stated.

Present at the programme, which was holding virtually and physically, were: Barrister Agbor Balla, President of the Centre for Human Rights and Democracy in Africa; the representative of the Mayor of Buea; the Regional Delegate of Women’s Empowerment and that of Social Affairs.

The project might be the first but not the last. That is why Peter Ngong Tonai, President of HSUVI, said they thought it wise to start with the youths because it will build a greater future for persons with disabilities.

According to him, the trainees ranged from 18 to 30 years of age whom “we think we should arm them with the necessary skills, the knowledge and the knowhow to go back to their respective communities and disseminate to other disability youth groups and even to adults so that, in future, we should have an inclusive Cameroon, where people should be able to accept persons with disabilities as part and parcel of the community.”

The event had in attendance other disabilities’ associations like CAEHUCAM, which is the national association of students living with disabilities in Cameroon universities. Also present was CUAPD, the Coordinating Unit of the Association of Persons Living With Disabilities among others.