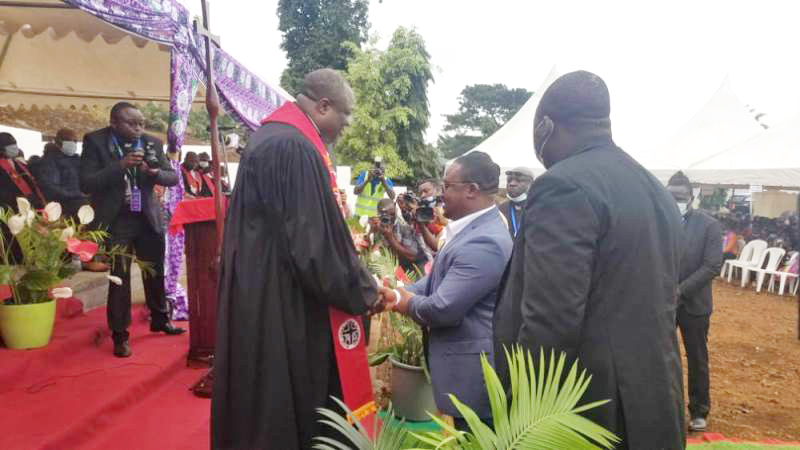 The newly inducted Financial Secretary of the Presbyterian Church in Cameroon, PCC, Ngole Mbuayo Ndive Mosuka, has pledged that he will manage the church resources for the betterment of the community.

He vowed on Sunday, November 7, at SYNOD during an occasion that saw him being sworn in office.

The induction and commissioning of Ngole Mbuayo Ndive Mosuka was chaired by the PCC Moderator, Rt. Rev. Samuel Fonki Forba.

The Moderator urged him to demonstrate the zeal and determination in properly handling church finances.

“Now is the time and we hope you will work with more zeal and determination,” he said adding that they “are here to induct the 11-financial-secretary and the third personality of the PCC in Cameroon who is generally in charge of the financial stewardship of the entire PCC.”

According to the Moderator, the induction and institution of Ndive Mosuka as Financial Secretary was supposed to have taken place immediately after the appointement some six years back.

But, because of other issues coupled with the Anglophone Crisis, he said, they “were not opportuned to do that.”

While thanking God for the unique opportunity to present him to the public, he equally prayed for God to shower the new finance boss with blessings.

After being given the mandate, Ndive Mosuka said he will “execute God’s plan and make sure that we manage the resources of the Church for the benefit of the community, by providing quality healthcare, educational facilities, employment and vocational training.”

To him, without Christians, there will be no church, and “our new plan of action is to reduce the dependency and stress which often have been placed on Christians.”

The new man of God has been working for the past six years, but was yet to be installed until that Sunday.

He was asked to maintain good Christian conduct among people, to coordinate the work of the treasury department and to administer the finances of the church with rules and regulations guiding his work as per the PCC.

According to the Financial Secretary, “the PCC has above 6,000 Cameroonians presently on the PCC’s payroll. He also added that there are advocacy programmes that aim at promoting peace and dialogue within the Anglophone Crisis sponsored by PCC, its partners and other icons of peace.

Ndive Mosuka was born in December 1983, by the late Martin Ndive and Christiana Nanyongo.

He has a Bachelor of Sciences in Accounting from the University of Buea, UB,  and a Masters  Degree in International Business and Finance from Dundee University.

While on studies, he was working with the PCC and has served in a different capacities.