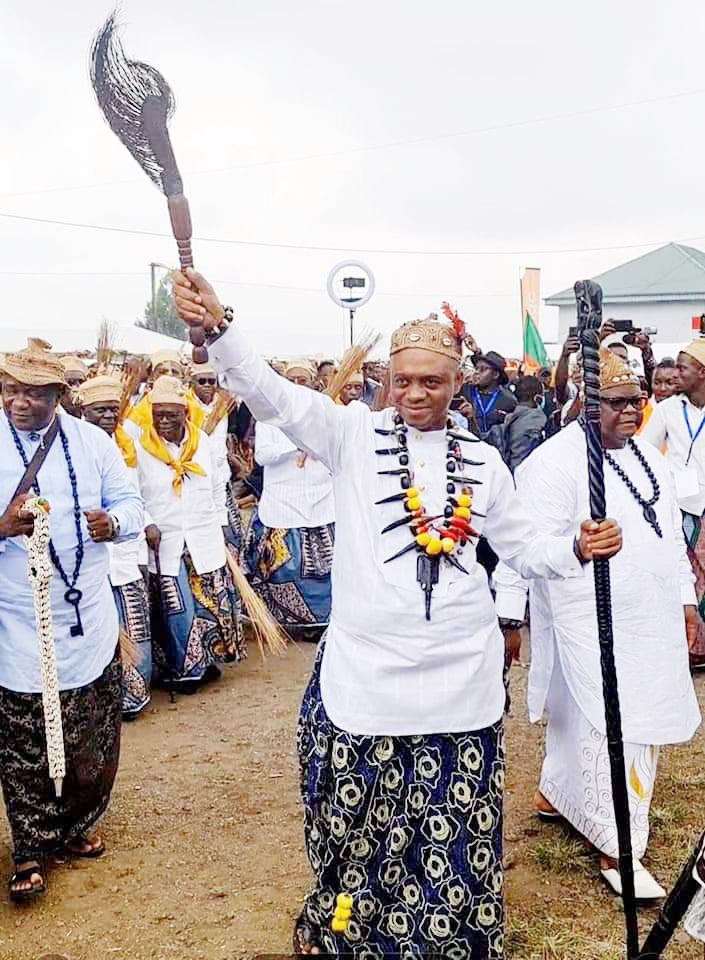 The Paramount ruler of Buea, Chief Dr. Robert Esuka Endeley, has been was crowned on Saturday, March 19, at the Buea Town Green Stadium, at a ceremony witnessed by thousands of people.

In a coronation address delivered at the occasion, HRM Esuka Endeley’s plea was for his kinsmen, the Bakweri people, to be more united and face their challenges as one people, emulating the charisma of iconic Mokpe indigenes like Prof Dorothy Limunga Njeuma, late politician EML Endeley, among others.

“The outcome of the coronation should be our unity; unity among us as Cameroonians, but, more so, unity among us the Mokpes. Unity means, wanting the best for each other; unity means empowering the younger ones; unity means sharing a common vision for our destiny. Unity does not come by accident as you may know; unity is an intentional act to bring the best of each other together for a common purpose,” he said in the widely applauded speech.

To exemplify the unity call, he said: “One of the priorities of my reign is to see the return of our annual cultural festival called Mbando … This should be the one ritual ceremony that every child born of a Mokpe parent in any corner of the world looks up to… I believe we can have an annual Mbando ceremony where we rotate the venue between our seven Sub-divisions of Fako (Tiko, Limbe I, II, III, Buea, and Muyuka) on an annual or bi-annual basis.”

He added: “As the Mbando kicks off and gains steam, we should consider the construction of a Bakweri Cultural Centre; it will also house a Museum and Library. This will be a building that will host multipurpose offices and an event hall. A Menyoli Library or Monangai auditorium within that facility would be a wonderful thing to have. We could have a Musonge ballroom in that facility too. This building will be the testimony of our unity for generations to come; it will be an example to our children. This will be an ideal place for us to put the statues of some of our Mokpe prominent cultural and political icons.”

The 46-year-old is being coroneted seven years after the death of his predecessor and uncle, Chief Justice Samuel Moka Lifafa Endeley. The coronation makes Esuka Endeley the 7th Paramount Ruler of Buea under the Wonya Likenye dynasty, which has ruled the clan since around 1844.

Saturday’s ceremony was witnessed by over 6,000 people, including Government ministers and other top State officials, traditional rulers and several dignitaries from across Cameroon and abroad.

It also ended week-long activities that have characterised the coronation process which began on Tuesday, March 15, in Buea.

Representing Cameroon’s Prime Minister at Saturday’s occasion was Territorial Administration Minister, Paul Atanga Nji, who was accompanied by the Director of Cabinet at the Prime Minister’s Office, Confiance Ebune; Minister Delegate to the Ministry of Planning and Regional Development, Paul Tasong and others.

Also in attendance was the National Chairman of the Social Democratic Front, SDF party, Ni John Fru Ndi, who was accompanied by his Vice Chair, Hon. Joshua Osih.

Chief Esuka Endeley was confirmed Paramount Ruler by a Prime Ministerial decree of November 25, 2021, and, as a First Class Chief – based on statutory categorisation – he is expected to be the “auxiliary of administration”, as Government usually calls traditional rulers.

During a prayer service that preceded the coronation ceremony, the Moderator of Presbyterian Church in Cameroon, PCC, Rev Fonki Samuel Forba tasked the new Paramount Chief to remain “neutral and apolitical”.

Rev Samuel Forba, who led three other religious leaders in the ecumenical service at the event, said he should abstain from politics all together and remain politically neutral, but to firmly defend his Bakweri heritage while looking up to God Almighty.

In a message he titled: “Listen to God as you rule your people,” Rev Samuel Forba told Chief Esuka to; “let the word of God be your source of inspiration” and to “be neutral and be apolitical but be receptive to everyone”.

Among scores of political, religious and traditional leaders, Rev Samuel Forba slammed the dictatorial leadership that is taking over the world’s political systems, including Cameroon, stating that Chief Robert Esuka Endeley should be an exemplary leader.

Other religious leaders, including the Bishop of Buea, Mgr Michael Bibi; Buea Central Mosque Imam, Alhaji Abubakar and a Baptist Pastor, prayed for Chief Esuka’s reign to be long and that he will bring development to his people.

HRM Robert Esuka Endeley’s reign comes amid visible challenges facing chieftaincy in Buea, caused by the birth of “satellite” villages and “fake chiefs” who are in the business of irregularly selling land.

According to University of Buea pioneer Vice Chancellor, Prof Dorothy Limunga Njeuma, Chief Dr. Esuka Endeley “is wearing the crown at a time when the chieftaincy institution is tainted with multiple vices such as arbitrary sale of native land by some unscrupulous chiefs and the rise of fake villages and chiefs, which activities have contributed to loss of respect for the chieftaincy institution.”

Prof Njeuma, who spoke at the coronation ceremony on behalf of the Bakweri elite, said the new Paramount Ruler is expected to be “a reformer” who is “ready to restore integrity into the chieftaincy institution.”

Also harping on the land grabbing issue that awaits the Paramount Chief, Moderator Rev Samuel Forba told him to “never be silent and allow a few selfish persons who have no regard for tomorrow’s generation, to destroy the livelihood of the people of our future generation as they plunder our land”. He said he must endeavour to reserve land for posterity and for his people.

Meanwhile, Prof Samuel Ewusi Kale, a Bakweri native and acclaimed scholar, outlined a series of challenges the young ruler must be ready to face, among them the insecurity caused by the Anglophone Crisis; rampant sales of land by some Bakweri Chiefs; disappearance of some Bakweri cultural practices; and most especially, the shortage of social amenities like water and electricity in Buea.

“Considering that water is life and health at the same time, it is critical that the Paramount Chief should work together with the Mayor of Buea to ensure that the priceless commodity is delivered in an affordable and sustainable way. If this is possible, the population will regain confidence in the institutions and especially the traditional institutions,” Prof Kale said in a write-up.

After witnessing the coronation of the Buea Paramount Ruler, the President of the Southwest House of Chiefs, HRM Atem Ebako, said the event to him marked a “rebirth” of the chieftaincy institution.

“The Chieftaincy institution has been rubbed in the mud for a long time by certain institutions. So, what we saw is a rebirth of what the traditional chiefdom should be.  And that’s why I’ve been very happy all along,” he said.

“The church has caused the decline of the Chiefs. The administration has caused the decline of Chiefs. But this time around, the law has given the House of Chiefs the right to express its opinion and we are going to do this very, very effectively so that the status of the chiefs will be brought to a level that everyone will know that the chieftaincy institution is a strong one,” he added.

The newly crowned Paramount Ruler of Buea was born on 20 July 1975 in Buea Town, Buea Subdivision in Fako, Southwest Region of Cameroon.

He is the last son of late Hon. Dr Emmanuel Mbella Lifafa Endeley, the renowned politician who advocated for West Cameroon to join the Federal Republic of Nigeria in the 1961 self-determination Plebiscite.

Born in an affluent royal family, Esuka Endeley attended some of the best schools in Cameroon. Between 1978 and 1980, he attended Government Nursery School Buea Town and then later schooled at Presbyterian Primary School Buea Town between 1980 and 1987.

He then moved to Bilingual Grammar School Molyko where he obtained GCE Ordinary and Advance Level certificates between 1987 and 1993.

He obtained a BSc and an MSc in Applied Geology from the University of Buea in 1997 and 2000, respectively, and then pursued studies in CISCO Systems Inc. in Douala where he obtained a Certified Network Associate Diploma, CCNA, in computer networking in 2002.

In quest for more knowledge, he furthered education in the USA, where he obtained another MSc degree in Software Engineering in 2005 from the University of St Thomas, Minnesota. He subsequently acquired a Doctorate degree in Cyber security from the Capitol Technology University in Maryland, USA, in 2016.

Beside working for over 20 years in the domains of IT, software, banking, healthcare industries and project management, Chief Dr. Esuka Endeley has published, at least, five scholarly works.

After the death of his uncle, Chief Justice SML Endeley in 2015, Prince Robert Esuka Endeley was chosen by members of the royal family, the Wonya Likenye, on 10 April 2016 as successor.

The decision did not, however, go well with other members of the royal family, who shared a different opinion as to who was to become the 1st Class Chief of Buea.

After several consultative talks on the succession issue, from November 10, 2017, through February 5, 2018, he was endorsed ‘Chief’ by 13 out of 16 constituted King Makers.

The endorsement was only confirmed three years later by a Prime Ministerial decree of 25 November 2021, which recognised him as Paramount Ruler of Buea.

Despite grudges that might still exist among some members of the Wonya Likenye family, who did not approve his endorsement as Chief, the coronation of Chief Dr. Robert Esuka Endeley as Paramount Ruler of Buea, many say, has demonstrated the unity of the Mokpe man to uphold their culture.

Bamenda Stadium Campaign:  We Are Tired Of Waiting, No More Promises – PWD President