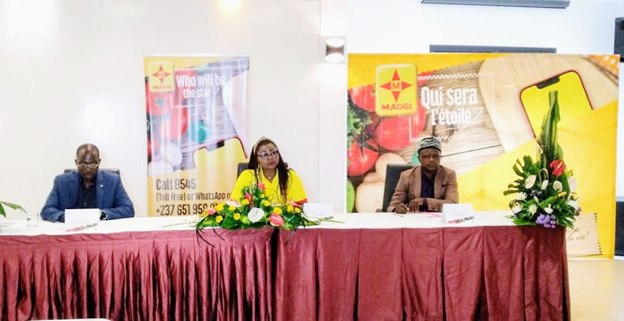 The caravan will see Cameroonian girls between the ages of 18 and 35 compete on who will emerge a star in cooking.

These revelations were during a press conference to launch the competition on Thursday, May 5, at Star Land Hotel in Douala.

According to Madeleine Ngo Mooh, who is the Category Development Manager, CDM, for MAGGI at Nestle, the caravan will showcase the cooking skills of the young girls and from which winners will be selected in each pole. To her, the winners from the various pools will become the ambassadors of MAGGI Star and they will also be empowered to disseminate their skills to others.

“As a MAGGI Ambassador, the star of the region’s mission is to contribute with Nestlé to the education and awareness of families on healthy cooking, in particular through simple and practical tips on the proper use of MAGGI culinary broths,” the press kit read in part, adding that, “Through this competition, MAGGI intends to demonstrate that you can cook simply without having to compromise on taste.”

The Caravan will also be an avenue for Nestlé, through MAGGI, to promote and celebrate Cameroonian cuisine by recognising the culinary talents of Cameroon.

Talking to journalists, she said, during last year’s edition, the caravan took place in six regions of Cameroon, which comprised three pools: Pool One (the West and the Northwest); Pool Two (the East and Adamaoua); and Pool Three (the North and the Far North).

This year’s edition will focus on the remaining two pools, that is, the Centre and South Regions making one pool, while the Littoral and Southwest Regions will also be combined as another pool.

“The Caravan explores the regions of the country to promote culinary talents and to detect the bleu cord of each region called “the Star of the Region”.

To get young girls to register, Nestlé has issued a tool-free line 8545 or WhatsApp at (+237) 651958910.  The MAGGI Star Caravan intends to reach nearly 10 million people in 2022 in Cameroon. This activity is in line with Nestlé’s purpose to unlock and enhance the quality of life for everyone, today and for generations to come.

According to Nestlé, Culinary lovers will have the opportunity to learn new recipes and share more than 10,000 meals.

The launching equally had in attendance a nutritionist, Dr Fotso, who said the kind of meals people eat also contributes to their health. He cautioned against the too much intake of MAGGI, salt, sugar and other ingredients that might cause people to suffer from obesity. He advised that people should have a balanced diet while urging for the much consumption of meals that contain a vegetable.

Since 2017, Nestle has made use of more familiar and common ingredients; improved the nutritional profile of its products by working on the reduction of salt and sodium in addition to iron enrichment; Created more value for society and the community by increasing local sourcing and contributing to the local economy; Raised awareness and has contributed to nutrition education on healthy lifestyles, cooking and food.