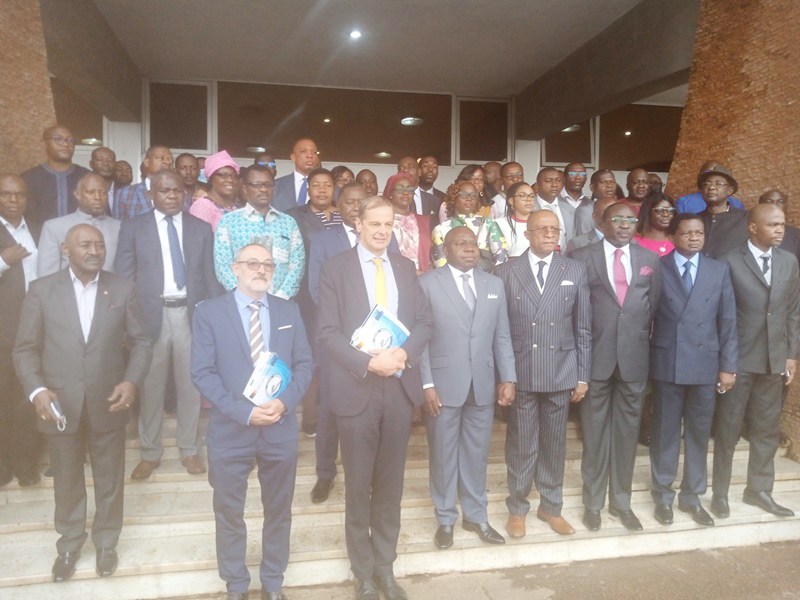 An operation to count and digitalise documents issued in main and secondary civil status registration centres in all the council areas and the intensification of permanent government communication campaign on civil status in Cameroon has begun.

The exercise, which spans from March to April this year, was launched during a regional workshop in Yaounde on March 10, 2022 by the Minister of Decentralisation and Local Development, Georges Elanga Obam.

In the course of carrying out the inventory, officials of decentralised services of MINDDEVEL; as well as those of the Ministries of Territorial Administration; Justice; Health; Social Affairs; Basic Education; Women Empowerment; and of BUNEC, plus Secretary Generals of councils, shall be edified on their duties in matters of civil status data collection and onward transmission.

In his keynote address, Elanga Obam hailed the European Union, EU for the multifaceted support to Cameroon in the civil status domain and to especially the Coordinator of the Active Citizenship Strengthening Programme, PROCIVIS, who, along with the team, are accompanying the Ministry and the National Civil Status Registration Office, BUNEC to facilitate the modernisation of Cameroon’s national civil status system.

He said the systematic and methodical registration of civil status happenings has several advantages not only at the level of judicial and legal protection of individuals but also at the administrative and data collection levels. He said the civil status registry is an important tool for the protection of the fundamental rights of an individual.

The Minister, for example, said the registration of births, in addition to being a fundamental right, is essential in the exercise of several human rights such as the right to identity; access to some basic social services such as health and education; the protection of children against discrimination based on age; maltreatment and exploitation, and so on.

Elanga Obam added that civil status registration is particularly important for the women and the girl child for it helps in cushioning inequality between sexes. He listed such advantages to include protection against child marriage; access of the girl child to education; the opportunity for women to claim rights to inheritance if they are in possession of marriage and death certificates of their spouses; access to banking services as an identification document can help women have financial independence; and so on.

Concerning the administrative advantages of civil status, the Minister said it is important for each country to know the number of yearly births and deaths as well as the main causes of mortality in order to orientate the functioning of its health system. He noted that the only means to get inhabitants counted is to conduct a census of births and deaths in civil status centres.

Such information, he stated, is based on the legal identity of each individual and it helps countries to identify the most pressing health needs. Meanwhile, the registration of births, deaths and marriages also play a key role in the elaboration of public policies; the identification of development problems as well as for reliable projection of demographic trends.

He said it was against the backdrop of looking for solutions to the problems that government, with support from the European Union, engaged reform of the law applicable to the civil status registry.

On his part, the Ambassador and Head of the EU Delegation to Cameroon and Equatorial Guinea, H.E. Philippe Van Damme, told that a functional civil status registry is important in a state of law, for it enables citizens to exercise fundamental rights; and helps in the elaboration of development policies. He said the ongoing civil status reform exercise funded by the EU would safeguard civil status archives and facilitate digitalisation of the civil status system of the country.

Meanwhile, the Director General of BUNEC, Alexandre Marie Yomo, disclosed to reporters that the ongoing counting exercise of civil status documents will take place in some 420 main and 1,400 secondary civil status registration centres across the country. He said amongst which are 14 urban councils; civil status registries at the country’s diplomatic and consular services; and sub-divisional councils. He said the exercise is the operationalisation phase of the civil status reform system in which government is pumping enormous human and financial resources.