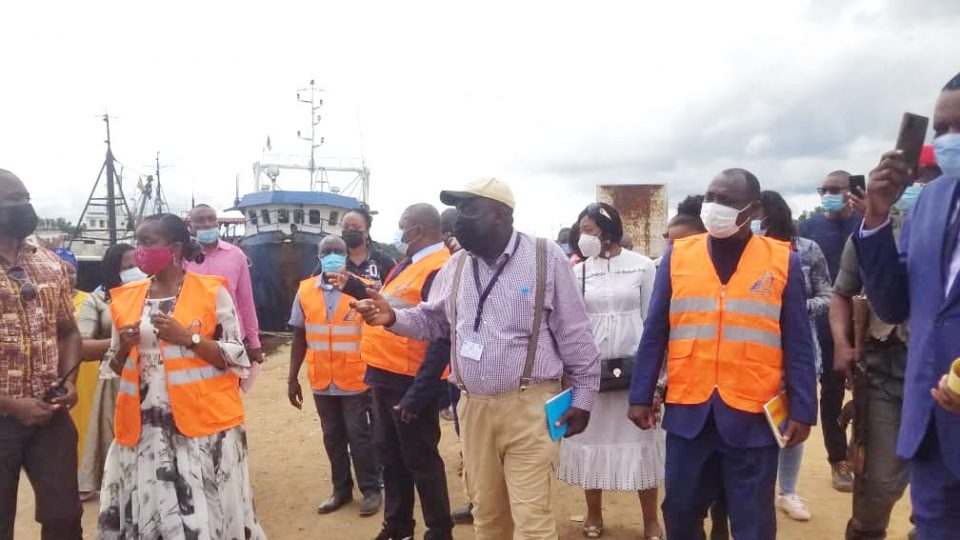 The new Director of the National Ports Authority, NPA, Dr Louis Eboupeke, was in the Southwest on Thursday, October 14, for an acquaintance working visit with 17 of his collaborators, amongst them his Deputy, Pamela Ayuketa.

His visit started in Tiko and later took him to Limbe, Idenau and ended at the Deep Seaport site at Ngeme. He concluded his Southwest visit on Friday, October 15 by stopping at the National Oil Refinery, SONARA, where he visited the Refinery’s port terminal.

At the Tiko Ports, the Director General was led to the newly-built warehouse structure. He visited the new and more spacious warehouse within the new structure with over 20 cars recently imported. It was meant to show the public that they can now import cars through the Tiko Ports facility. One of the workers said the cars were coming from several different countries abroad and that some do come through Cotonou in Benin.

But one of the main problems the Tiko Port faces is the docking section. It has got a lot of wrecked vessels that need to be removed. The authorities said the wreckages of these vessels were occupying valuable space and needed to be cleared for more landing space for ships. The authorities also complained that some military installations have been built right inside the Port’s yard. The Tiko Port shares the same space with the amphibious military unit.

The convoy of the Director-General proceeded to Limbe where they visited the age-old Bota Ports, Limbe. This facility was built in the German colonial days and, for over 70 years, very little rehabilitation has been done. It was concluded that some rehabilitation works will have to be done, especially along the queue of the Ports where ships and other vessels come and anchor.

For the security and safety of persons and goods, the Director-General recommended that a railing be constructed along the edges of the queue to ensure proper safety of those working or operating within the queue. The queue at the Bota wharf, towards the seaward end has got no protective railings by the edges. Its absence makes it possible for an accidental fall into the sea.

At Idenau, the Port was even busier than Tiko and Limbe. In some of the Boats, workers were busy offloading goods imported from Nigeria such as plastics, slipper wears, some edibles and so on. While from Cameroon, goods for export included items such as palm oil among others.

The visit, for Thursday, ended at the Ngeme Site long earmarked for the construction of the Limbe Deep seaport. Here, it was observed that some people were already building houses on the site. In a later briefing to the press, the Southwest Regional Coordinator and Limbe Ports Agency Manager, Oben Eta, said the Director-General was given an ample explanation of all the problems plaguing the Ports there, and he promised to resolve them.