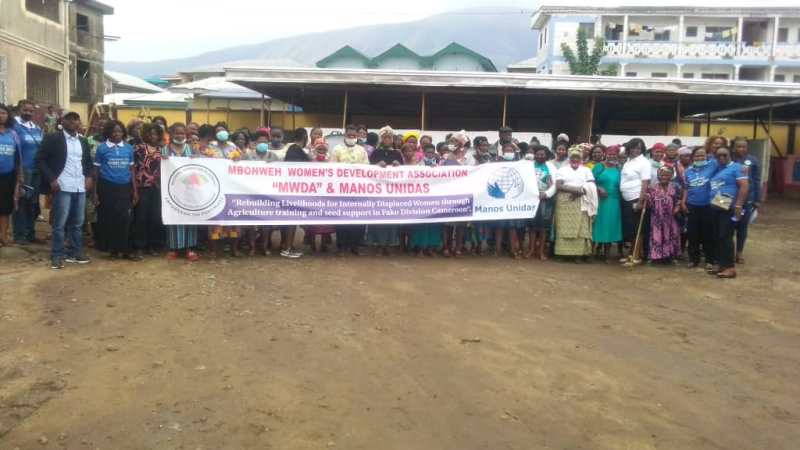 Mbonwe Women’s Development Association, MWDA, has trained dozens of IDP-women-farmers on how to cultivate vegetables even without having any farmland.

This was during a workshop the association organised in Buea recently. It was attended by internally displaced persons, IDPs.

According to the association, cultivating vegetables, spices and consumable crops does not require much agricultural space and IDPs can do so by using make-shift containers as their farms.

These containers, when filled with soil, can be placed on locally-made stands and placed anywhere in their compounds for them to grow.

Most of the IDPs who are trouping into Buea are women, most of them being farmers. But sustaining life in the urban centre where farmland is scarce is very challenging for them.

“We realised that just looking for funding to give a woman – 10 cups of rice and a bottle of groundnut oil – is good for the day, but these women have lived on agriculture; their lives are on agriculture,” said Evelyn Nojang, President of Mbonwe Women’s Development Association.

Mbonwe WDA also exhorted the farmers on how to use pesticides, urging them to use these pesticides as last resort and only after all other options to sustain their crops have failed.

“We realised that one of the biggest problems that these IDPs face is the use of chemicals. The first thing we taught today was how to use chemicals, how to protect themselves…,” said President Evelyn Nojang.

Ndive further cautioned the farmers not to recycle pesticide containers for household use. Citing cases of poisoning resulting from the misuse of such containers, she added that they should use chemicals only on plants for which they are intended, and should religiously follow usage prescriptions on pesticide containers.

According to Asaba Prudence, Project Director for Mbonwe WDA, the workshop came to “tell them that you are internally displaced but you are not desperate… There is hope for them.”

“At the end of this seminar, we can be able to assess their needs and link them with people who can help. Some people are willing to help but they don’t know what particular aspect to help in,” she said.

The association has, in the past, organised a series of workshops in September last year during which over 500 IDPs in Buea and West Coast, Idenau, were “taught best methods of planting”.

To further develop farmers through training, Mbonwe WDA’s President, Evelyn Nojang, revealed that they were “organising adult literacy classes. “We have 10 centres presently…,” she told the press.

US Donates Health Kits To Cameroon On World Pharmacists Day