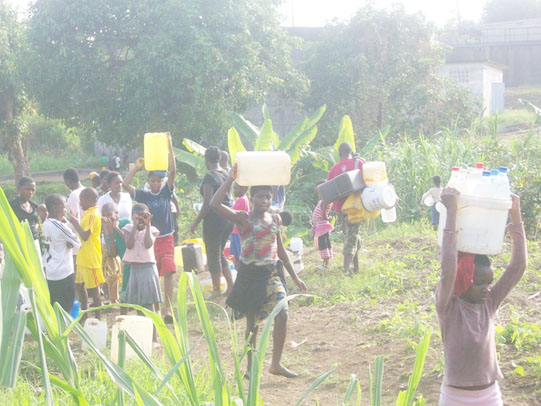 The towns of Buea, Tiko and Mutengene in Fako Division, Southwest Region, will soon be lifted from a current acute water shortage as a water project worth over FCFA 50 billion is deemed to materialise in the near future

A cooperation agreement for the first phase of the project, worth FCFA 3 billion, was signed on September 21 in Yaoundé by the Minister of Economy, Planning and Regional Development, Alamine Ousmane Mey, and the General Manager of Export Finance Deutsche Bank, New York, Humaya Narati.

The first phase of the water project, costing FCFA 3 billion, will span across six month and the second phase, lasting 24 months, is estimated at FCFA 51 billion.

Present at the signing occasion was Fako East Member of Parliament, Hon. Findi Stanley Mokondo. If realised, Hon Findi said, the project will lift tens of thousands of people from water deficiency something which he has been advocating for.

“I wish to draw your attention to the fact that the people around the Limbe Omnisport Stadium are still to be connected by CAMWATER,” he said at the ocassion.

“CAMWATER has refused to take its pipe to close to 1000 residents in an area of potential customers. I want to use this medium, Mr Minister, to ask the director of CAMWATER what the problem is. The inhabitants of these areas have resorted to borehole,” he added.

According to the Minister of Economy, the project will raise daily production of drinking water to 30,000m2 in these three towns. It will also expand the transport and distribution network of potable water over a distance of 288km, as well as strengthen storage capacity to 16,000m3 of water.