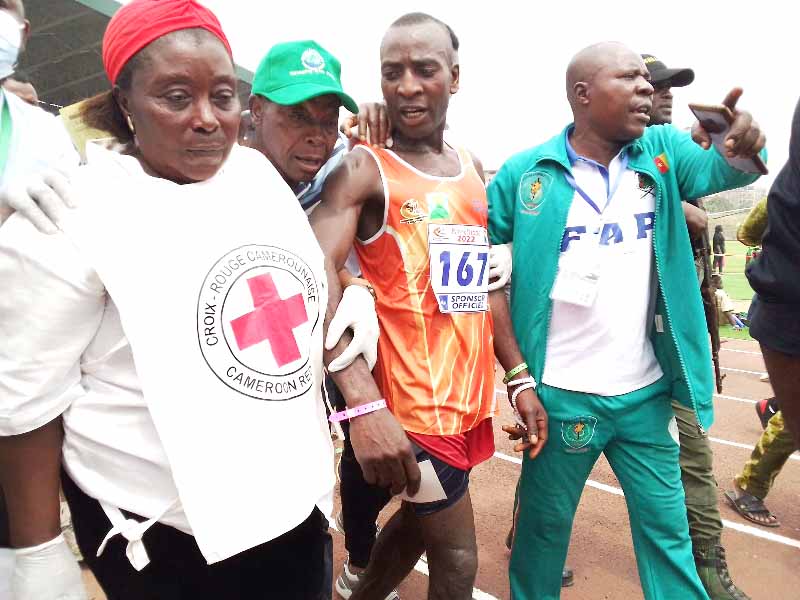 The 27th edition of Mount Cameroon Race of Hope ended Saturday, February 19, with Elvis Nsabinla emerging winner of the FCFA 10 million cash prize for the first time in the Senior Men Category.

In the Junior Women Category, the first, second and third winners are Sylvia Munki, Sandrine Chinwen and Issa Kadjeda, respectively. The winner received a cash prize of FCFA 2,670,000, while the second and third place winners had 1,780,000 and 890,000 respectively, alongside several prizes from sponsors.

The first, second and third prize winners in both the Senior Men and Women Categories went home with FCFA 8.9 million, 6.9 million and 4.45 million, respectively, instead of FCFA 10 million, 8 million and 5 million as thought.

It was announced that 11 percent of their cash had been deducted as tax. The outstanding athletes, however, received several prizes from sponsors, including from CAMTEL, Prudential Beneficial Insurance, as well as a prize from Cameroon’s First Lady, Chantal Biya, and from the Ministry of Youth Affairs.

After winning the Mount Cameroon Race of Hope for five times in the Senior Men Category, Godlove Gabsibuin, 34, says he deliberately let Elvis Nsabinla win the race this year.

Gabsibuin had reached the summit earlier than Nsabinla in Saturday’s race, but said he slowed down for the latter to overtake him around Southwest Governor’s Office, which is about two kilometres to finish point.

“I was the one who led Elvis up to the mountain and down. So, you know I’m one of the highest winners of this competition. So, for me, I always like that everybody should win. That’s my policy. So I am not worried,” he said. “I was discussing with him, encouraging him that this is how athletes work; that we should cooperate, we should be together.”

After participating in over 12 editions of the race, during which he won five times, Gabsibuin says it is his policy to encourage the younger generation of athletes by letting them win.

“I don’t bother to win. So, I have to encourage people who are coming up, let them win too,” he said.

It was the first time 26-year-old Elvis Nsabinla was winning the trophy, and Gabsibuin says he has taken the second position severally. Last year, he was also second to Ali Mohamadou who emerged champion. Gabsibuin equally told reporters he deliberately let Mohamadou win because he wanted to encourage young people coming into the race.

Gabsibuin first won the Mount Cameroon Race of Hope in 2012 and was again champion in 2013, 2015, 2018 and 2020. The record maker lauded this year’s competition, saying it was better organised than that of last year. “I believe the organisation of the race this year was really good when compared to last year. The medical checkup we did yesterday (Feb. 18) was a bit fast; the sharing of jerseys and the premium was a bit fast. This made athletes to go and rest. But when you compare with that of last year, you see that there was a difference,” he said.

Out of the 30 foreign athletes from eight other countries, who participated in the Mount Cameroon Race, only Kenyan athletes stood out as Cameroonians claimed almost all trophies.

Among the Kenyans who stood out was 31-year-old Serem Naaman, who was the first male to reach the mountain summit.

Despite not featuring among the first three winners in the Senior Men Category, Naaman did not return empty handed as he was rewarded a CAMTEL cash prize of FCFA 500,000.

Another Kenyan was 18-year-old Sylvia Bery Munki, who claimed the first position in the Junior Women Category, a position which earned her FCFA 2,670,000 alongside several gifts from First Lady Chantal Biya, CAMTEL, Prudencial Beneficial Insurance among others.

Seven other foreign countries which participated in the race went home without a trophy. There were athletes from Ethiopia, Congo, Chad, Morocco, Central Africa Republic, Tanzania and France.

This year’s race witnessed greater ambiance than that of last year, with thousands of Buea denizens flooding the Molyko Omnisport Stadium where athletes started and stopped.

People flooded the streets as they took off at 7am Saturday, and thousands of people were again lined up along the road as the athletes descended the Chariot of the gods.

The Mount Cameroon Race of Hope has previously been timid since 2017, when the crisis in the English-speaking regions aggravated into an armed conflict.

This year’s event was themed: “Peace, an Ingredient of Nation Building” and peace and anti-terrorism messages flooded the Molyko stadium, where activities took place.