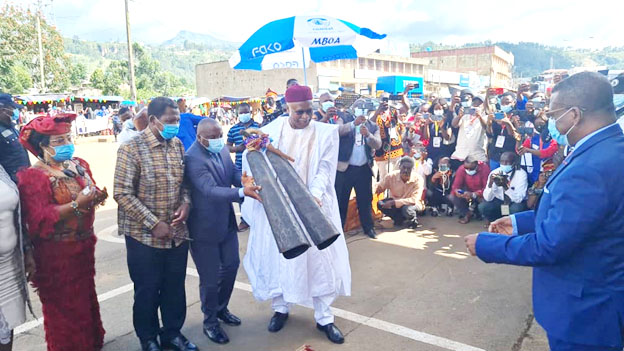 During his visit to the Northwest regional capital Bamenda, PM Chief Dr Dion Ngute revealed that the government has employed the use of several means to taw the Anglophone crisis.  In this light, he revealed that contrary to claims that the government has refused to talk to separatist fighters, they have been in constant talks with the various leaders, directly and indirectly. He however regretted that that, unlike the government, Separatists have refused to make any compromise, as they are bent only on the independence option.

The revelation was made on the side-lines of the second lap of Prime Minister Joseph Dion Ngute’s peace mission to Bamenda, August 5, and during an audience granted the journalists at Ayaba hotel. In response to numerous worries and questions from journalists living and working in Bamenda, on why Government could not just go ahead and dialogue with Separatist leaders, rather than undertaking same consultative meetings in the Regions, Felix Mbayu, Rapporteur General of the 2019 MND and Secretary to the Resolutions Follow-up Committee, was categorical that Government has, since, been doing all in its power to get all movement leaders to the dialogue table and, in the process, making lots of concessions, but Separatist leaders remain intransigent on the position of independence.

The Prime Minister’s visit to follow-up implementation of the Resolutions of the Major National Dialogue gave him an opportunity to give an update about Bamenda-Babadjou Road and the ring around Bamenda city, which he said is beginning in the weeks ahead with the World Bank finally giving its clearance.

PM Dion Ngute thanked priests for praying for peace to return to war-ravaged Regions but urged them to be like Christian Cardinal Tumi, who influenced some of the boys in the bushes to drop their arms.

Thanking the mammoth crowd that turned out at Commercial Avenue Bamenda to listen to him, he said, in addition to the road project from Babadjou to Bamenda and major streets, “… let me add the Bamenda Municipal Stadium where work stopped, will resume. Before I visit Bamenda [again], all these projects must have been completed. Be assured.”

He told Bamenda population and Northwest in general that the road and stadium development projects cannot be achieved without peace.

He said ghost towns, killings and kidnappings for ransom must stop, and “it is you to conquer fear. Say ‘enough is enough.”

The Regional Council President of the Northwest, Prof. Fru Angwafor, and Asheri Kilo of Basic Education drilled the population on what the region stands to benefit from their sectors.  Several dance groups braved it to Commercial Avenue to welcome the PM.

The first day of PM Dion Ngute’s working visit to the Northwest was almost marred by sporadic gunshots. At Matazem in Santa, a gateway into the Northwest, Separatist fighters fired shots from nearby hills and the PM’s speech was disrupted as Governor Lele and security officials scampered with him into his car and drove off to the Governor’s Office and down Ayaba Hotel where he started consultative talks with Administrative officials, military command, parliamentarians and press.

“I am here in pursuit of peace. I have not come to insult anyone. I am here as you’re aware to talk on the issue of National Major Dialogue held two years ago with greater achievements, so far, which some people have refused to see. Not everyone can be OK with these enormous achievements.

“President Paul  Biya despatched me and my team to the two Regions to let us understand these benefits accruing from the Major National Dialogue, for example, the Anglophone Subsystem of Education, as someone told me, has achieved more than what they asked for. The same goes with the common law now integrated into ENAM, recruitment of young Anglophone lawyers in the ENAM training system.”

He said even the grievances relating to poor treatment and service delivery in public services has been addressed. The population, he said, will feel the greater impact of the Regional Council, as it will be factored in next year’s National Budget. Other achievements relating to the Special Status, which he also enumerated included the recent appointment of Public Independent Conciliators for Northwest and Southwest; the House of Chiefs, the General Code on Regional and the Local Authorities giving powers to Regional Assemblies.

The Prime Minister appealed to the population: “… with all these achievements, I am begging, let’s stop this senseless war, let’s stop killing ourselves, we have blocked development for long, great schools that we used to have here are gone, let’s us re-establish our dignity. The army you find around is for your protection,” the PM said.

Minister Felix Mbayu, who was the Rapporteur of the MND, explained what the Special Status is bringing and will continue to bring if peace is established.

“We can not have everything in a day. We should stop manipulating our population with lies. Truth must not be slaughtered on the altar of lies. This is our Region, the development of this Region is on our shoulders. Let us continue to call on our brothers in bushes to lay down their arms and come over to Disarmament and Rehabilitation Centres. The government is doing a lot and will do more.” Minister Mbayu said.

Others who spoke, including the Mayor to the Bamenda City Council, Paul Achobong, were all praises to the Prime Minister for coming to follow up resolutions of the MND and explain further for the understanding of all.

At Bamenda Commercial Avenue on Wednesday,  a man who called himself General Scatter and 13 other boys from the bushes of Nkor in Noni, Bui Division, were presented to the PM and population as having dropped their guns.