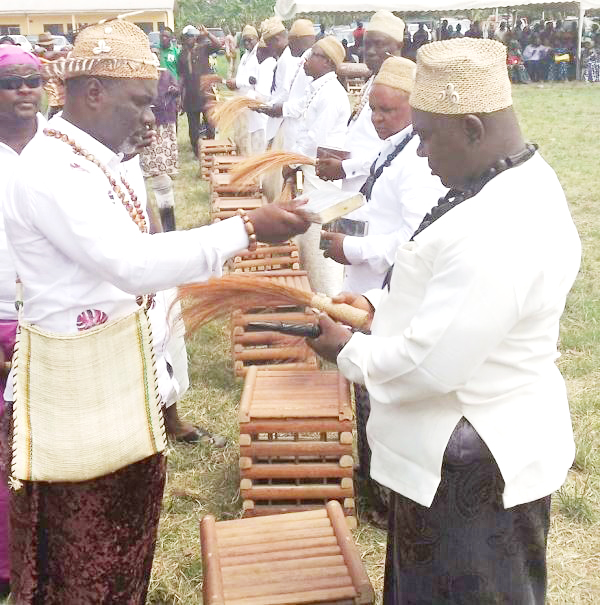 The Chief-elect of Njopongo Chiefdom, Otto Mondoua Lifongo and his Traditional Council have accused the Chief of Missaka, Chief Makunde Dipoko Daniel of attempting a mass assimilation plan, aimed at swallowing up several villages in Tiko Subdivision, under the guise that, they are part of Missaka Village.

While appreciating the DO of Tiko Subdivision and the SDO for Fako Division for ensuring that the rehabilitation process of Njopongo village in Tiko Subdivision is exemplary, and in strict respect of the rules and regulations in force, the Njopongo notables said they will continue to ask the officials to take the process to the end, by not allowing another Chief to swallow up Njopongo village and others under his.

The notables of Njopongo village, in a reaction to the mediatised mass coronation in Missaka on March 26, 2022 by Chief Dipoko, which was also covered and published by The Post, said it was a well-calculated move by Chief Dipoko to assimilate the nine villages to Missaka. While questioning the legitimacy of Chief Dipoko to crown Chiefs of other villages, the Traditional Council Chairman of Njopongo, under the village’s Civil Society, Etimbe Luma Ludwig said they have taken steps by taking time to request to write to the Tiko Administration, to be clarified on the implications of the March 26 event. They also cited the Ministerial order of 18 January 2022, suspending the putting in place and crowning of Chiefs, they also cited the ministerial order of 2018, which laid out the modalities on how rehabilitation, creation and reclassification of chiefdoms could take place if they have to. They said they were surprised that, Chief Dipoko would go ahead to refer to the existing villages around Missaka as quarters under his village’s jurisdiction, when in reality, they have all existed as separate villages with their traditional rulers dating back to the days of colonialism.

In a correspondence addressed to the DO warning that Chief Dipoko was planning to coronate supposed Chiefs in nine villages, the Civil Society of Njopongo Village told the DO that, “In case HRH Makunde Dipoko Daniel wishes to solidify his position as a Second Class Chief by creating 3rd Class chiefdoms under him, he should seek their allegiance, not try to force them under him by designating chiefs in clearly autonomous territories or chiefdoms. Such an act, if allowed, could create inter-territorial conflict and might cause public disorder. We beckon you to prevent him from making a mockery to our governmental administrative process and laws,” they had warned. The warning was however not heeded, as they said the DO’s Office dismissed it as mere rumours, stating that, Chief Dipoko could not crown chiefs. The Njopongo notables said the DO’s office maintained that Chief Dipoko was going to put in place quarter heads in Missaka and not crown chiefs as forewarned by Njopongo village authorities.

According to Njopongo Village’s Traditional Council Chairman, Etimbe Luma, his village which is under rehabilitation went to Chief Dipoko, as a notable and neighbour who could help guide them on how to rehabilitate their village. He said the Chief of Missaka rather saw it as an opportunity to fiddle their village under his own. According to Etimbe Luma, things seemed good until Chief Dipoko wanted them to rather act as his proxies in their own village. They said Dipoko had his own hidden agenda to assimilate the neighbouring un-rehabilitated villages. He said it was then that they disagreed, prompting the Chief to part ways with them, after several meetings and missions, including tours in which the DO of Tiko visited Njopongo like other villages. He stated that it was because of the disagreement over assimilation attempts that Chief Dipoko who had himself presented them to members of Administration as traditional authorities of Njopongo village (videos evidence of the event was presented to The Post) then decided to pick someone else, a certain Jean Jacques Ngangue from Douala to act as his proxy in the area. As such, Jean Jacques Ngangue was among the nine other individuals projected as Chiefs and crowned by Chief Dipoko of Missaka on March 26, 2022. Njopongo stakeholders say because Ngangue is in Douala and less concerned about Njopongo, he seems only interested in being subject to Chief Dipoko, as a Quarter Head.

Dissenting voices from Njopongo say while they were relating with Chief Dipoko, he had told them that, his interest is not in ruling over others. They said he had stated that he was more interested in his work as a preacher, and just wanted to see villages in and around Missaka in the Tiko Court Area reorganised and where need be, rehabilitated. They said this made them look up to Chief Dipoko as a big brother to trust and work with for collective interest so that as he achieves his second-class Chieftaincy ambition, while they too could revive their villages and pursue development agendas. In substantiating their claim that, the enthroned individuals are merely proxies of the Chief of Missaka, Njopongo stakeholders say one of those crowned as chief in one of the Nine Villages is Chief Dipoko’s own half-brother, crowned as Chief of Muanda I, an un-rehabilitated village. They argue that, two brothers cannot all be chiefs in different villages and one crowning the other.

Questions Over Legitimacy Of Enthronements

Njopongo notables say the mass enthronement of Chiefs by Chief Dipoko flouts traditional and legal procedures. They argued that, a Chief of another village cannot and does not have the right to enthrone a Chief in another village, which is not his, and without following the proper administrative procedures put in place by MINAT. They also argued that such things have to start first with the recognition of the administration, but that in this case, the administrators say those put in place by Chief Dipoko are Quarter Heads. They also note that in the invitation letter sent to Administrators, Chief Dipoko in trying to veil his double-edged motive said the event was about “the designation of some traditional authorities in the various communities that make up the Missaka Dynasty”.

While also dismissing the notion of Quarter Heads, they argued that Njopongo and other villages cannot be classified as Quarters under Missaka, because they have their own history and leadership that are well documented and some have survived generations.

History Of The Area, Chieftaincy Issues

Among some documents provided to The Post by Njopongo stakeholders to buttress the point that they are a distinct people and not a quarter in Missaka, was an administrative letter dating back to 21, April 1939, addressed to the District Officer of Victoria. In the letter it is cited that, Otto Etabea was the first King of Njopongo and the first in the area too. Otto Etabea is the ancestor of the present Chief-elect of the Njopongo, Otto Mondoua Lifongo, who was relating with Chief Dipoko since November 2020, before Chief Dipoko picked another person from the area to work with when Otto Mondoua asserted that his village is independent of Missaka.

The Njopongo stakeholder also claim that apart from an oral history, Missaka Chief has no facts to back his claims over the villages, among which his ancestors from Douala came and settled. They argued that Chief Dipoko became a Second-Class Chief in 2021, and that if Missaka had been a second-class Chiefdom with others under him, then he should have just inherited his second-class status from his predecessors naturally. “He tried to use the nine villages as those that formed his second-class Chiefdom. He can use them as allies, but trying to use them as quarters under his Chiefdom is wrong. It would interest the Fako people to note that, The decree of 1977, for chieftaincy for some time was not well interpreted and applied by most of local administrators in the territory as the president of the republic would have like, which led to the suspension due to elements such as fantasy and incompetence.

“When the suspension was uplifted around 2018, the president of the republic instructed the minister of Territorial Administration that, these elements ‘fantasy and incompetence’ should no more feature in the management of chieftaincy in Cameroon. In this light, the Minister came out with a circular letter from then till date to enforce the decree of 1977, which now gives a new approach of this same decree of chieftaincy so as to avoid the above elements that the President of the republic was not happy about. So if all the  circular letters of MINAT are being respected, most of these chiefdoms will find themselves wanting like the Missaka case since it is one of these chiefdoms which were lucky to have their 2nd class status when the MINAT circular letter was just coming out and they need to regularise their situation.” Ludwig said.

They also note that, they appreciate the efforts put by the DO of Tiko in collaboration with his immediate boss the SDO in ensuring that the Rehabilitation process of Njopongo village in Tiko Subdivision be exemplary in the strict respect of the rules and regulations in force and to be like a kind of pilot rehabilitation given its legal justification.  They emphasised that, since Administration is written, they have requested that DO has to in writing, tell them the implication of Chief Dipoko’s mass coronation, while also using the official documents that dates back generations to make informed decisions on the future of Njopongo and other villages, in the interest of peace and the people’s concerned.

Post-Colonial Slave Trade Initiatives: Construction Of Afro-Descendant House May Be Beginning Of Reparations