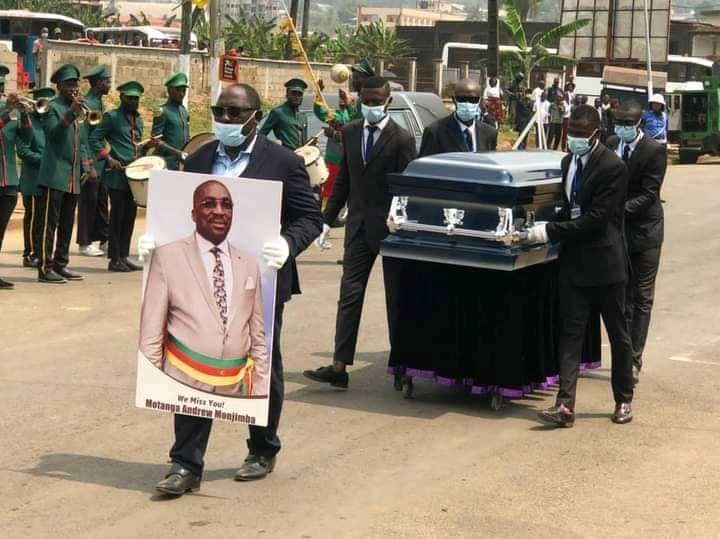 Governor Okalia who led the funeral ceremony was in Limbe on behalf of the Head of State, Paul Biya.

Thus, on behalf of the State, he posthumously decorated the late Limbe City Mayor as “Commander of the National Order of Valour.”

Governor Okalia Bilai stated that the State honours were in recognition of the countless number of political, developmental achievements that Motanga recorded during his 62-year stay on earth.

“President Paul Biya, satisfied by the achievements of the late City Mayor, decided to raise him to the High Rank of Commander of the National Order of Valour,” Okalia said.

He went on to recall the famous Limbe Festival of Arts and Culture, LIMBE FESTAC, which Motanga had literally used to transform Limbe into the awesome capital of cultural enjoyment in Cameroon.

“Indeed, he knew how to make everybody happy in this City of Friendship known as Limbe. Mr. Motanga will be remembered for all the above and much more as one who lobbied and collaborated with Members of Government to bring development projects to Limbe… Today, after Ekema Patrick Esunge, the Lord Mayor and Elephant of Buea, it is the late Mr. Motanga Andrew Monjimba, the big ‘whale’ from the City of Limbe that we are going to bury.”

The Governor remarked that Motanga was leaving behind a big gap laden with many unaccomplished projects. He urged that those who shall take the lead after Motanga should not be ashamed to copy from his good deeds.

Governor Okalia Bilai was followed by a series of other speakers, among them the Governor of the West Region, who regretted that, in Motanga, he had “lost a dear friend and brother.”

Eyeya Zanga had the same kind words for Motanga who he said he had worked with and known for over three decades.

Other Speakers who came on to eulogise the late ‘Ekoka Moto’, as he was also fondly called, included Professor Elvis Ngolle, former Minister of Forestry and Wildlife. He was the head of a delegation of the CPDM Central Committee to Limbe on behalf of the CPDM Scribe, Jean Kuete. On Kuete’s behalf, the Professor, presented a hearty message of condolence.

On behalf of the Limbe City Council staff and all, the Acting City Mayor, Karen Nora Tanga epse Wouapit, thanked all the mourners who came from far and near.

The funeral ceremony for the late City Mayor commenced with a requiem mass that was said by the Synod Clerk of the Presbyterian Church in Cameroon, Rev. Hans Miki Abia.

He led a college of other pastors and clergy men who prayed that God should accord Motanga a peaceful rest in heaven.  Rev. Miki was speaking on behalf of the Moderator, Rev. Samuel Fonki. He went on to say that Motanga led a peaceful life on earth and he was sure that he was going to continue to rest in peace. He, nonetheless, urged God to forgive him of any errors that he must have, as any human, committed.

The mourners were saluted for their great show of support by the family head, Gerald Motanga, who is the Director in charge of General Affairs at SONARA.

Motanga’s first daughter, Collins Kwenti Motanga, presented her late father’s biography where she said he was born on August 15, 1959. Thus, he died at the age of 62 after a successful political, business and social career.

“He leaves behind a wife, Mrs Nzelle Motanga, seven children, 14 grandchildren, a number of other adopted children, friends, the CPDM family and a lot of others to mourn him.”