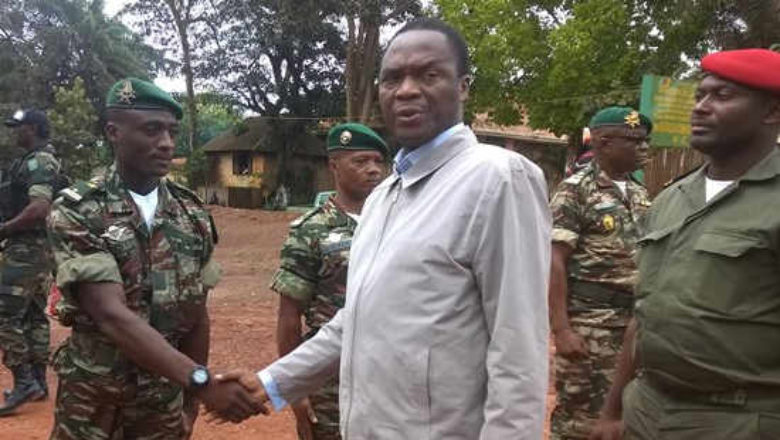 Cameroon’s Minister Delegate at the presidency in charge of defence, Joseph Beti Asomo, has held a security crisis meeting behind closed doors in Bamenda, one week after 15 soldiers were killed in the Northwest region.

Beti Asomo’s visit which locals said witnessed heavy militarization is coming as the military planned to change its ways of operation in the war against separation.

He is going to Bamenda when Military spokesperson had indicated a change of strategy to combat Separatists fighting in the Anglophone breakaway Regions.

In the meeting, he said the quality of weapons in possession of Separatist fighters in a clear prove that the group has internal and external support.

To him, this new attacks on the military is poised for a new approach in combating the fighters.

According to Asomo, they are people whose aim is to downgrade the morale of the soldiers which he called the Army not to yield to.

He however did not disclose how the new approach will look like. He entered Bamenda the same day military tankers also arrived the region.

MINDEF’s Reaction To The Killing Of Soldiers in Bamessing

After The Post reported in the last edition, No. 02213, that Government was silent over devastating casualties on soldiers on September 16’s killing, the Defence Ministry, on Monday, September 20, reacted.

In a communiqué detailing what happened, Military spokesperson, Navy Captain, Col. Cyrille Serge Atonfack Guemo said: “It is thus clear the coming into play of high-capacity explosives and new weapons undoubtedly enshrines a paradigm change in ongoing operations with the defence and security forces having as mission to do everything possible to restore peace and guarantee the free movement of persons, goods and capital throughout the national territory.”

This came four days after 15 soldiers were killed and their amoured cars wrecked by ‘General No Pity’-led Amba boys in Bamessing, Ndop, Northwest Region of Cameroon.

The Colonel said the Amba boys used an improvised explosive device, IED, and an anti-tank rocket launcher, ARTL, before engaging heavy gunfire on the soldiers who were already incapacitated by the detonation of the explosive charges.

The communiqué did not mention the strategy they will change to, but many are speculating that the military may start using helicopters or aerial bombardment.

Aside from the killings in Bamessing, the Colonel said IED had been used too on the military in Kumbo on September 12.

In those two attacks, the Government said 15 soldiers were killed and several civilians were also killed as well as three vehicles damaged.

While conveying President Biya’s condolences to the bereaved families and the survivors, the military spokesperson said the attack in Bamessing was carried out in contempt of International Humanitarian Law.

The communiqué, however, without proofs, linked the Separatists to terrorist groups beyond Cameroon’s borders, simply by saying that Amba boys are in possession of high quality fire.

“In any event, the Cameroonian army remain determined to eradicate all forms of violence in the Northwest, Southwest and Far North Regions, areas in which, it is now clearly established, there exist sophisticated arm links and exchanges between secessionist terrorists from the Northwest and Southwest Regions with external violence fundamentalist groups,” read the communiqué in part.

Many have interpreted this fundamentalism in that the Government is linking Amba boys to Jihadists – people fighting for religious motives.

Despite giving these connotations, it still remains that the war in Anglophone Cameroon emanated from the cry against marginalisation which analysts said the Government turn a blind eye to.

Some months ago, Cameroon’s Territorial Administration Minister, Paul Atanga Nji, said the military had defeated Separatists, adding that what is happening now “are just pocket of resistance.”

Since then, casualties are coming in numbers from all sides: military, separatist and civilian.

NW CPDM Renewal Of Basic Organs Closing In On Consensus

I Have Forgiven All Those Who Tortured Me For 17 Years –Prof. Titus Edzoa