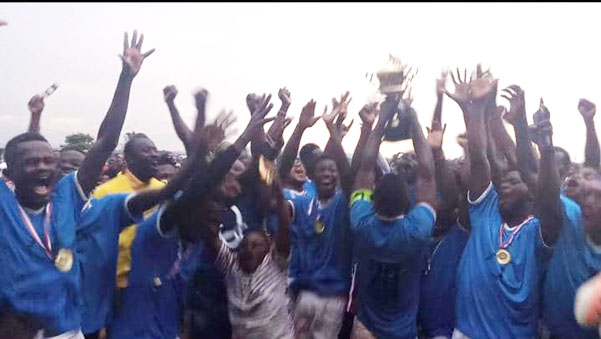 Despite high rate of insecurity in Manyu Division in the Southwest Region, the Mamfe Council through Mayor Robertson Tabenchong organised a holiday football competition tagged “youth tournament for peace” which successfully came to an end on Sunday, September 5.

Despite several calls and  threats from the separatist fighters for teams to boycott the tournament, the  competition brought youths and teams from  localities with high rate of insecurity  like Batchuo Akagwe and Kesham village from Akwaya subdivision who constituted seven teams.

According to the cup donor, Mayor Robertson Tabenchong, the people are tired of constant threats and manipulation of   separatist fighters and have embraced the path of development and peace. That is to him is the reason Mamfe town is today boosting of haven kicked out the ghost town phenomenon. It was against this backdrop that he organised a tournament to bring back the desired cohesion

Addressing the youths during the closing ceremony of the tournament, Mayor emeritus Sessekou Ayuk Taku Nchong John, called on the people of Batchuo Akagwe to accept peace and take back-to-school as a challenge.  While remembering those who have been brutally killed in Batchuo Akagwe,  the former mayor  told them that if they the youth could  rally like this to showcase their strength, then they should  also gather to fight against  insecurity for their future and the future of Batchuo.

At the close of the competition, Home Boys FC Mamfe emerged first, Batchuo Ntai FC 2nd while Kesham FC from Akwaya came at the third position. The mayor has promised to organise more of such competitions and other youth engaging programs in the months ahead.