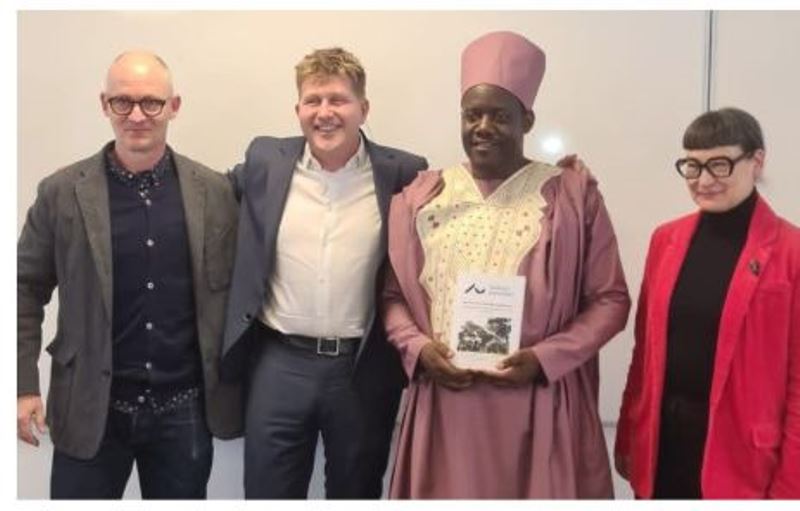 Dr Kenneth Toah Nsah (Second from Left) alongside other stakeholders

A new PhD holder, Dr. Kenneth Toah Nsah, has said literary texts have the potentials to contribute to climate change mitigation. He made the statement shortly after defending a PhD on the topic: “Can Literature save the Congo Basin? Postcolonial Ecocriticism and Environmental Literary Activism”.

Defended on March 11, 2022, in the University of Aarhus, Denmark, the dissertation approaches literature from its functional point and argues that literary texts have the ability to contribute to environmental protection.

“This work approaches literature from its functional/utilitarian dimension and argues that literary texts have the potential to contribute towards environmental protection and climate change mitigation in the Congo Basin, which is the second largest tropical rainforest in the world after the Amazon Basin. The dissertation contends that, in addition to relevant political, scientific and technological solutions and innovations, literature is important in addressing climate and ecological concerns in the Congo Basin and elsewhere, particularly because of literature’s capacity to deal with complexity, to spotlight various forms of injustice, to raise ecological awareness, to educate various audiences (readers), and to influence behavioural transformations that align with sustainability, both at the political and individual everyday levels,” Dr Kenneth stated.

The intellectual piece is divided into two main parts: an extended introduction (Chapters One and Two) and five academic articles (Chapters Three to Seven).

“Part One presents the overarching argument of the dissertation, summarises the dissertation, introduces the Congo Basin and the selected writers, and discusses the theoretical and contextual considerations that inform the textual analysis, notably; postcolonial ecocriticism, environmental literary activism, the functional aesthetics of African literatures, theatre for development in Africa and environmental drama,” he said.

“Part Two engages with the representation of various environmental or ecological concerns in the texts through close readings, thereby navigating between aesthetic and thematic dimensions of the texts, on the one hand, and real-life Congo Basin ecological concerns, on the other hand. In this regard, the dissertation examines the causes and consequences of deforestation on both humans and nature. It argues that some Congo Basin writers had predicted the emergence of global youth climate activism and it discusses human-animal entangled relations through companion species like dogs, horses, and unusually buffaloes through co-domestication,” he added.

The literary work also examines the ecopolitics of freshwater pollution and disorderly urbanisation as well as how bad governance causes these problems and their attendant consequences on the rights and health of both humans and nature, and sees literature as solution.

Dr. Kenneth further stated that the dissertation contributes to the field of postcolonial ecocriticism.

The dissertation, he says, contributes in taking African postcolonial ecocriticism beyond its previous focus on the late Nigerian ecological martyr, Ken Saro-Wiwa, and his native oil-rich Niger Delta Region of Nigeria; the late Kenyan environmentalist and Nobel Prize for Peace laureate, Wangari Maathai, and South African fiction, especially Zake Mda’s writing. This dissertation does so by foregrounding the biodiversity-rich Congo Basin and its environmental writers.

“The dissertation argues that literature can contribute its own quota, in synergy with other academic disciplines and efforts (political, scientific and technological), in preserving the Congo Basin by ensuring its sustainability, conserving its biodiversity, mitigating climate change therein, and promoting environmental justice for both humans and nature in the basin and  beyond,” he added.