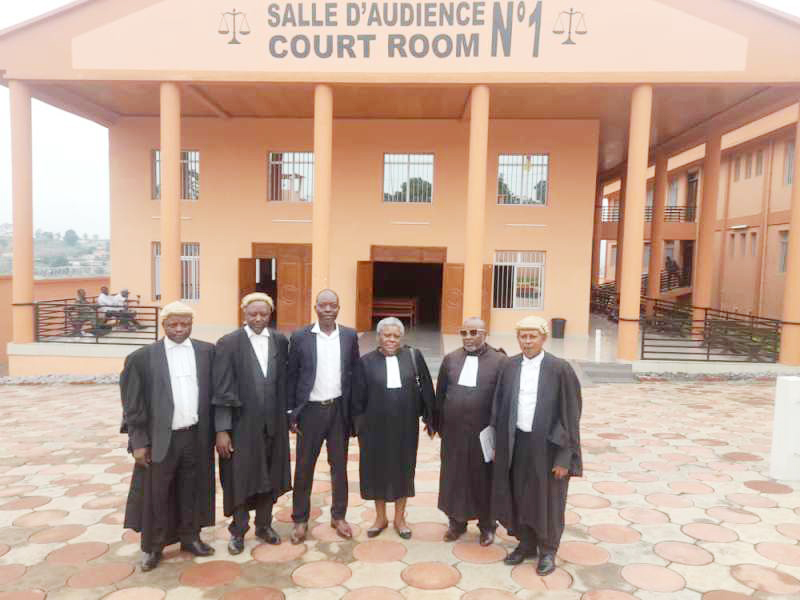 The Communication and Media Chairman for the Defence Team of Sisiku Julius Ayuk Tabe and other Anglophone detainees; Barrister Nicodemus Amungwa Tanyi, says the team has been indicted by the State of Cameroon for secession.

Barrister Nicodemus Amungwa is one of the lawyers defending Sisiku Julius Ayuk Tabe and other Anglophone detainees languishing in detention cells and prisons across Cameroon, arrested within the context of the ongoing socio-political crisis in the Southwest and Northwest Regions.

The notification for interrogation of Barrister Amungwa, endorsed by the Military Magistrate at the Yaounde Military Tribunal, Ignace Eyebe Etoundi, harps on Articles 74 and 111 of the Penal Code that evokes and punishes acts of secession.

The examining magistrate, Ignace Eyebe Etoundi, who is conducting the interrogation, is being assisted in the task by Warrant Officer, Patience Ngamgmo Silape Evige. Barrister Amungwa, who has already appeared before the examining magistrate twice, notably on February 24 and March 10, 2022, respectively to answer questions on allegations of secession is being assisted, among others, by Barristers Hippolyte B. Tiakouang Meli and Joseph W. Akumwiyadze.

When The Post, over the weekend, embarked on getting clarifications as to how a human rights lawyer defending detained Anglophones sentenced by the military tribunal on varied charges including secession, is also being examined for secession, Barrister Amungwa narrated the story on the origin of the matter.

He said on May 31, 2021, he received distress calls from the daughter of a client of his, Gabriel Allo, an assistant Superintendent of Police who is of late. He said Allo, who had a problem to settle with one Essiane Avini Mylene concerning the family home and a piece of land but unfortunately died and left the case behind with the daughter, Irene Allo.

The home, built and occupied since 1982 by Allo, was in a marshy zone that he had procured from somebody and reclaimed around the valley in the Djoungolo Bastos neighbourhood in Yaounde. Barrister Amungwa said going by Ordinance No 74-2 of 6 July 1974 to establish rules governing State lands, such a piece of land is classified as public property. Chapter 1 Section 2 of the said Ordinance states that such pieces of land don’t have land certificates.

“But, curiously, in 2017, the France-based Essiane Avini appeared with a land certificate claiming Allo’s house he built and lived in with the family since 1982. She said the property belonged to her, arguing that Allo only constructed the house in 2017.

“When we, the lawyers to Allo started opposing the land certificate, the lady proposed to pay Allo off with the sum of FCFA 15 million. When Allo rejected, she decided to take the matter to court. The brother to the woman, one Pastor Motazé, vehemently opposed the actions of the sister and advised her to amicably discuss and negotiate with the retired Superintendent of Police. At this juncture, Pastor Motazé approached us, the lawyers to Allo and, as a team, we called the woman in question and she agreed to the negotiations as proposed by her brother the pastor. She said she was ready, this time around, to pay Allo off for FCFA 35 million, but Allo argued that, considering his investments on the said piece of land since 1982, he should be compensated with the sum of FCFA 70 million.

“When the discussions and negotiations were ongoing, Allo was seriously sick. By the time the woman proposed to pay him off for FCFA 35 million, Allo was bedridden, was no longer talking and died suddenly,” Barrister Amungwa narrated.

He noted that, at this point, the lawyer to Essiene Avini, one Barrister Bertrand Nzouango, came and encircled the house with a fence and re-launched court procedures claiming that Allo was an illegal occupant of the woman’s land.

“That notwithstanding, the court went ahead and ruled that Allo should be evicted from the house and the piece of land. We, the lawyers to Allo were never served that court judgment. When a group made up of thugs surfaced with the eviction order, they were chased away by law enforcement officers of the Gendarmerie unit in Bastos who said the group was engaged in an illegal move. They then moved to the Groupement Territorial de la Gendarmerie from where elements of the gendarmerie were drafted to evict Allo’s family on that May 31, 2021.

“In the course of their action, our late client’s daughter, Irene Allo, was arrested under the rain by one Chief Warrant Officer, Minlo. A concerned neighbour who simply sought to find out what was happening was mercilessly beaten and also arrested. When I received the distress calls and moved to the Groupement Territorial de la Gendarmerie that May 31, I met our client and the neighbour in a very bad shape. Irene Allo, assisted by the lawyers, gave her statements that were recorded. I also met our colleague lawyer, Barrister Nzouango, who was there to represent Essiane Avini, who was unavoidably absent. After the interrogation of my client, Nzouango stated that since his client was absent, he will sit in her place and be confronted with my client.

“I objected his fraudulent motion vigorously before the investigator. I informed Barrister Nzouango that his request is unethical and a total anathema to legal practice, thus violates the relevant provisions of the Criminal Procedure Code and that if the investigator accepts, it will be manifest bias against my client. I told him that he cannot step into the shoe of his client because criminal responsibility is personal.

“That for him to be confronted with my client, he should produce a Power of Attorney from her and must withdraw his appearance for her and get another lawyer to assist him.

“When he discovered that his unethical practice was exposed, he concerted with the investigator, Chief Warrant Officer Minlo and began screaming that (il est en train de nous enregistrer); that I have been recording him and the gendarmes throughout our argument.

“I, gentlemanly, showed my phone to them while reiterating that the last image in my camera is my picture. That notwithstanding, Barrister Nzouango insisted that my phone flashed him and vowed that  the investigator should not allow me to move a step, he said the investigator should seize my phone and ensure a   thorough search of it. Hardly did I pull back my hand when Minlo seized my phone exclaiming in French: ‘donne moi ça, imbécile’.

After the confiscation, Nzouango, Minlo and two other gendarmes concentrated in searching my phone. They did not see any recording sound or image as instigated by Nzouango. However, Nzouango insisted that they should search the gallery because I am journalist and the communicator for secessionists and Separatists leaders and that if they don’t search well, I will publish everything that has been transpiring during the interrogation . They continued their search and suddenly Minlo started shouting obscenities at my person as “Ambazonien, tu sera poursuivir pour les actes de terrorisme et seccession”. After a while, they escorted me to their Commander’s office and the very Commander whom I had greeted on my arrival in the unit told them to take me to SEMIL or Service Central des Recherches Judiciares, SCRJ, without posing any questions to me.

“I was squeezed into a Toyota pickup, under the watchful eyes of Barrister Nzouango who waved Minlo with agility as they drove me off to SCRJ leaving him the opportunity to play his game.

“While they detained me for 10 days at SCRJ, my client Irene Allo, was also  detained at Groupement de la Gendarmerie Territorial de Mfoundi Yaounde for several days. Curiously, the investigator did not confront Nzouango and my client but went ahead to evict and demolish late Allo’s family house that same day.

“That is why Nzouango and his thugs, after escaping, decided to go to Groupement de la Gendarmerie Territorial de Mfoundi where he obtained blessings and used all means to throw me into jail in order to attain their objective. After demolishing the house, Nzouango went back and proposed that he will give money to the children of Allo to go rent a house and they refused and told him they leave him to his conscience. He begged them for several hours as they were picking their property smashed by the caterpillar he brought to demolish the house.

“On June 1 , 2021, the President of the Cameroon Bar Association, Claire Atangana Bikouna, who is guarantor of my bail, led a delegation of lawyers who visited me at SCRJ and during our discussion she revealed to me that  my name has gone wide on social media and that she is surprised that it is a colleague called Bertrand Nzouango who published such disparaging information about my person with affirmative declaration that he saw images of the atrocities in the Northwest and Southwest Regions in my phone. That in his publication Nzouango stated further that what he and the gendarmes searched and saw in my phone, the tongue cannot tell,” Amungwa narrated.

The Post also gathered that those keeping Barrister Amungwa’s phone flouted instructions from hierarchy in the Ministry of Justice who had ordered that the phone be handed back in 72 hours. They had reportedly suggested that if there is anything indicting the lawyer, it should be removed and stored as they argued that the phone is an extension of the lawyer’s office.

On whether he is now in possession of his phone, Barrister Amungwa said right up to the moment he is being indicted, the phone is still in the keeping of those who unlawfully seized it from his hands. He said his appearance before the examining magistrate of the Yaounde Military Tribunal was adjourned until when experts would have searched the phone.

Meanwhile, tongues are wagging within the country and beyond as to who has an interest in prosecuting lawyers of the defence team of Sisiku Julius Ayuk Tabe and other Anglophones detainees.

Issues At Stake: Is The Commonwealth Still A Gentlemen’s Club?