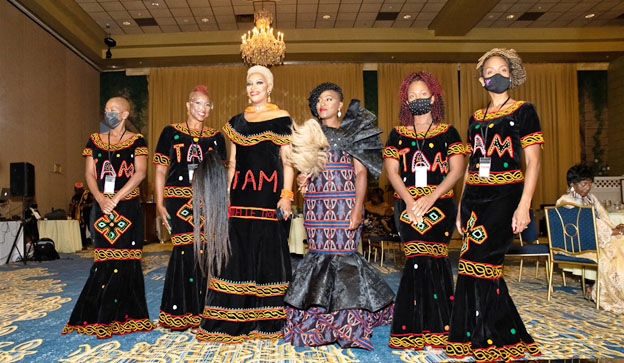 The long awaited official launching ceremony of the Toghu Army Movement (TAM) has taken place in style. The launching of the movement, which has as goal to see the Cameroonian culture have an international exposure, and globally accepted, took place on September 25, 2021, in Maryland, United States of America.

Co-founded by two US-based Cameroonian women; Maybelle Boma and Hetty Awambeng, the Toghu Army Movement has as vision to promote the beauty of the Cameroonian culture in general, and particularly to expose the uniqueness of the Toghu apparel, which is the traditional attire of people from the Anglophone Northwest Region of the country. Taking place at the prestigious Camelot By Martin’s, the historic event witnessed the presence of a delegation of personalities dispatched from the Cameroonian Embassy in the United States, headed by the Cultural Attaché.

The international dimension of the movement was measured by the presence of participants from different African countries, notably Botswana, Sierra Leon, Ghana and others. In line with the movement’s vision of promoting African culture as a whole, US-based Batswana joined Cameroonians to display their rich culture at the launching that saw the presence of Cameroon’s international lawyer and anti-corruption activist, Barrister Akere Muna. Popular Ghanaian Actor, Majid Michel, and celebrated Cameroonian singer, Richard Kings, also answered present.

A message of thanks from the vision bearers of the TAM released after the launching ceremony, announced that the next stop of the movement is Cameroon.

“The launching of the Toghu Army Movement on September 25, 2021, in Maryland USA, was a great success and this is thanks to the family spirit that was there for all to see and appreciate. We want to specially thank the Cameroonian Embassy in the United States of America for their amazing show of awareness of the importance of our culture and their encouragement. The presence of the Embassy’s delegation at the event, confirmed the recognition of the unique role our institutions have to play in the promotion of our culture globally. Our Cultural diversity and identity, is a gold mine which remains insufficiently exploited. It will forever remain an inexhaustible source of pride and solidarity we can always tap into.

“We take this opportunity to invite every Cameroonian and every other African, to join us, so, together, we can pilot this vision to the destination.  We thank God for using the launching ceremony as an opportunity for some of our Afro-American brothers and sisters who have been inspired by culture to retrace their roots to Cameroon. We hope this will encourage many more.

“We just started the movement with the launching, and we want to officially announce that our next stop will be in our beloved fatherland, Cameroon. Through love and solidarity, we can show that we are indeed proud of who we are!” Maybelle Boma and Hetty Awambeng, leaders of the TAM, said.

With origin from the Northwest Region of Cameroon, the Toghu, which according to Maybelle Boma already has a “universal acceptance”, possesses a unique identity which not only people from Cameroon’s Northwest Region feel proud of, but Cameroonians as a whole are identified by the apparel in every part of the world. The Toghu Army Movement was founded on February 19, 2021, by Maybelle Boma and Hetty Awambeng.