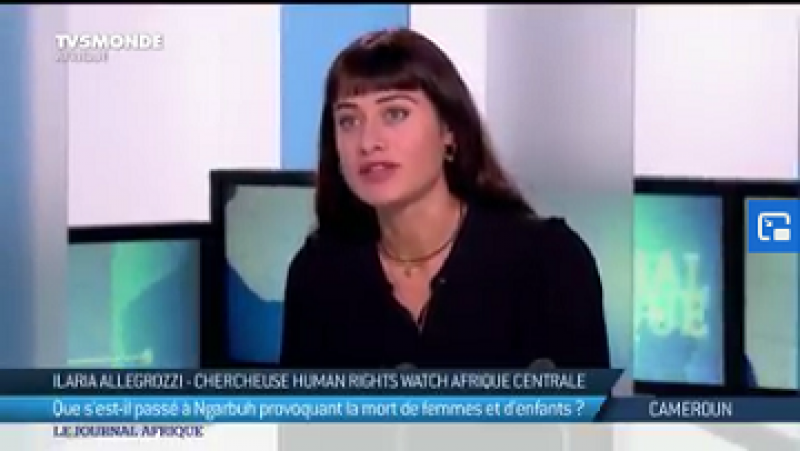 HRW also condemned the death penalty as a sentence to anyone, “regardless of the nature or circumstances of the crime.”

In a release on October 22, HRW’s senior Africa researcher, Illaria Allegrozzi, said the trial of the accused was marred by injustice and human rights violations, with a predetermined outcome.

“Victims of the Kumba massacre have a right to expect an effective investigation, and for those responsible to be brought to justice in a fair trial,” Allegrozzi said.

“Instead, Cameroonian authorities seem to have railroaded people into a sham trial before a military tribunal, with a predetermined outcome, capped with the imposition of the death penalty which is unlawful under international human rights law.”

Government had arrested some 12 people, including the school owner, its principal, and four teachers, who were tried in connection with the attack which had been blamed on Separatist fighters.

On September 17 this year, the Buea military tribunal sentenced four to death, “in a trial marked by procedural irregularities,” according to HRW. The trial started in December 2020.

The four persons condemned were reportedly found guilty of terrorism, secession, hostility against the fatherland, murder, possession of illegal arms and ammunition, and insurrection. Meanwhile, the court sentenced four others to five months in jail with a fine of FCFA 50,000 each, for allegedly failing to report threats from Separatist fighters. Four others were acquitted, including two teachers.

Military Court Should Not Have Been Used

However, the rights group, HRW, said the military court should not have been the first place to try civilians; as  the right to an adequate defence, presumption of innocence, and independence of proceedings, were “seriously undermined”.

“The use of military courts to try civilians violates international law. Military court proceedings typically do not protect basic due process rights or satisfy requirements for independence and impartiality,” Human Rights Watch said.

“If the authorities intend to deliver justice for this heinous crime against children, they need to bring a credible case before civilian courts and hold those responsible to account, according to international fair trial standards,” said Illaria Allegrozzi.

Citing leading defence counsel, Walter Atoh Chemi, HRW said the trial had “multiple procedural irregularities … including the inherent lack of independence and fairness of the process that civilians face before a military tribunal.

“The entire trial was predicated upon circumstantial evidence as opposed to real evidence, and throughout the trial, the prosecution brought no witness we could ask questions to,” Barrister Atoh Chemi told Human Rights Watch.

According to HRW, “The defence was not allowed to cross-examine witnesses; the proceedings were not translated from English or French into the Pidgin English spoken by most of the defendants; the accused were arbitrarily detained; and the use of the death sentence is of concern.”

The absence of witnesses to testify against the accused, HRW said, violated Section 336 of Cameroon’s Criminal Procedure Code which allows written testimony, if a witness cannot appear in court.

“To base a conviction solely or predominantly on the untested hearsay testimony of absent witnesses violates fair trial standards,” HRW stated.

According to Human Rights Watch, those sentenced were indirectly denied the right of appealing against the death sentence, as they were asked to fulfill several conditions before they could appeal.

“On September 14, defense lawyers notified the court of their intention to appeal, but were required to pay 200,000 CFA (USD 352), the amount of the fines also levied by the military court on the four defendants, before their appeal would be accepted.”

HRW furthered: “On October 4, the secretary of the Buea military court informed the defence lawyers about the conditions of appeal, which include an additional payment of 420,000 CFA (USD 739), a clear barrier to appeal in a death penalty procedure.”

Teachers Should Have Been Witnesses

Two out of the four teachers of Mother Francisca Academy detained, were slammed five-month sentences with fines. The teachers, alongside the school owner and its principal, were being tried for failing to report Separatist threats to the police, prior to the attack.

On the same day the attack happened, the Senior Divisional Officer for Meme Division, Chamberlin Ntou’ou Ndong, ordered the police to detain the owner of the school, her husband and two teachers at the Kumba police station to “ensure their safety,” citing potential risks of reprisals by the community.

But defence lawyer, Daniel Ikose Etongwe, told HRW: “These teachers should have been brought into the trial as witnesses, not as accused persons.”

Issues At Stake: Gnashing Under Weight Of Ransom Payment