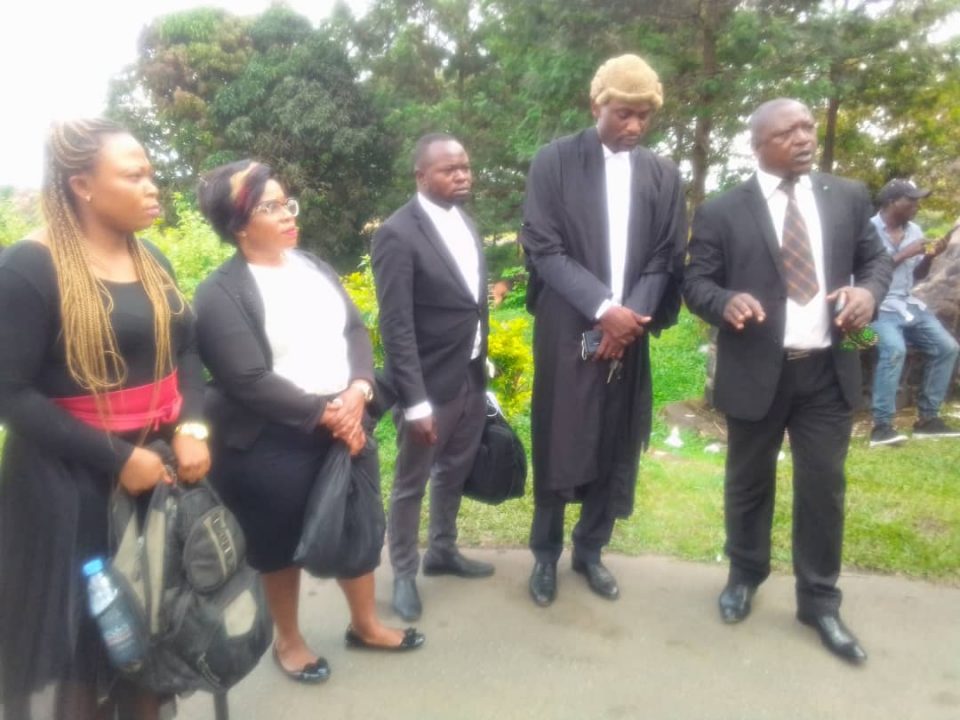 Lawyers representing eight-month pregnant Antoinette Kongnso Gohla, who was arbitrarily arrested for once dating Separatist ‘General’ No Pity some five years ago, when the latter was a commercial bike rider in Buea, left the Fako High Court I in Buea on Tuesday, October 26, disgruntled because the court gave a deaf ear to their observations, and rather warned them against granting press interviews.

The team of about 11 lawyers, led by Barristers Ewule Lyonga and Richard Tamfu, said they were dismayed seeing the case adjourned to a “far date” – November 9 – when the law requires fundamental human rights cases as such to be treated with urgency.

After adjourning the case during a court session where the lawyers were not granted permission to speak, the presiding judge said they should not grant interviews and, if they must do so, they should reiterate the court’s ruling on the case.

However, the lawyers say such threats will not deter them as they must continue defending the poor who are usually the object of persecution in a country whose justice system has been politicised.

“After the matter was adjourned to November 9, the other lawyers and I went outside, but the Judge called us back into the court and warned us about talking to the press. I don’t know whether the law says lawyers should not grant press interviews after a court session. The law only tells us not to disclose the substance of the case,” said Barrister Ewule Lyonga, main applicant.

“We feel highly intimidated, but nevertheless, we will continue the case. We decry the further adjournment to the 9th of November when cases like this need to be treated very fast,” Ewule further stated.

According to his counterpart, Barrister Richard Tamfu: “It will not be an overstatement to say that what is happening today is beyond understanding, with respect to our Criminal Procedure Code. We have the impression that we are not before a court of law…”

While in court, Tamfu said, they “wanted to make an observation which she paid a deaf ear to the observation and adjourned the case to the 9th of November which, to us, when it comes to human liberties, this is a very far date.

“The habeas corpus procedure should not be downgraded or baffled with. I think here, we are not doing justice and to add to it, we instead received threats; cautioning words. We are before that court. It is on a special procedure habeas corpus. We are not before an examining magistrate,” he added.

Barrister Ewule and his team had filed a case against the Buea Gendarmerie Legion Commander and the Central Prison Superintendent who have collaboratively detained the eight-month pregnant woman incommunicado for almost a month now.

At least, 11 lawyers are advocating for the release of Antoinette Kongnso who has not been seen, neither by her lawyers nor by her husband, since she was taken from her Buea Sandpit home, locked up at the Gendarmerie Legion in Buea alongside her husband, for almost a week, before later transferred to the Buea Prison, alone.

“So far, the team of lawyers who are representing eight-months pregnant Madam Antoinette Kongnso have not been able to gain access into wherever she has been kept to have a word with her as in the law; as embedded in the Criminal Procedure Code, which is the bible; which is the masterpiece of criminal proceedings in this country,” said Barrister Hillary Abia.

She was accused of being the wife of the dreaded Separatist ‘General’ No Pity. But from investigations published in The Post issue No. 02219, the woman ended relations with the said Separatist fighter over five years ago and later married Clovis Sima Shiynyuy, a builder.

Love With My Mumu Lover