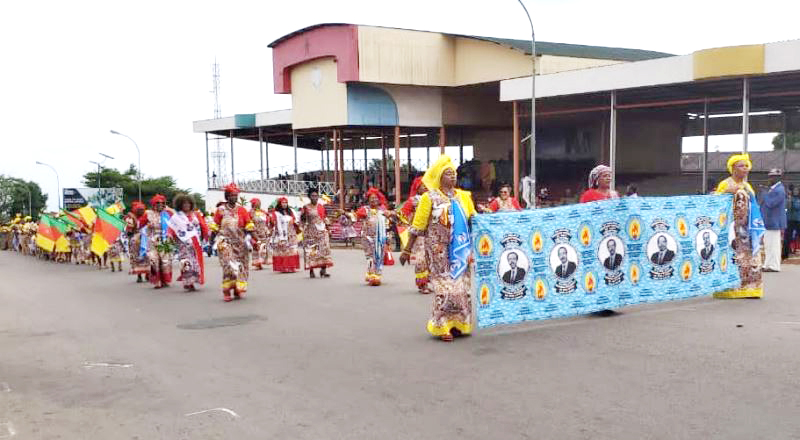 A celebration stalled in the past by the Anglophone Crisis, and recently by the Coronavirus pandemic, March 8 (Women’s Day) celebrations this year witnessed a massive turnout of women in Southwest’s regional headquarter, Buea.

At the Buea Independence Square, where Governor Bernard Okalia Bilai chaired celebrations, scores of women clad themselves in the women’s day attire, which bore this year’s theme: “Equality between women and men today for a sustainable tomorrow”.

In a speech, Southwest Regional Delegate for Women’s Empowerment and the Family, Lucia Ediage Sona, lauded the significant progress made towards gender equality in Cameroon, but said inequality remains a major concern in the country.

She asked government to double efforts towards gender equality and to appoint the first female Governor of the Region – a request that fellow women widely applauded.

“In Cameroon, there has been significant progress with respect to gender equality. Women are progressively approaching the desired 33 percent in Parliament and they have delved into professions which formally were left for men,” Ediage said.

“The women of the Southwest has not been left out of this progress. We are moving slowly but surely, and are waiting for the appointment of the first female Governor of the Southwest. However, despite the effort made in this present sphere in our country in the area of gender equality, gender inequality is still a major concern.”

Stating that Cameroon needs to utilise the skills of all its citizens, without any discrimination, the Delegate condemned some cultural practices in Cameroon that limit the potentials of women.

“In some cultures, widows are subjected to dehumanising conditions. Girls and women still face the ordeal of female genital mutilation. Boys are being favoured than girls, especially when family resources are limited. Such discriminatory practices need to be redressed in order to ensure the better platform for sustainable development,” she stated.

Meanwhile, the Mayor of Buea, represented at the occasion by 1st Deputy Mayor, Molinge Minerva, said Government could better assuage the situation of women in the country by supporting female education through granting interest-free loans to parents who want to send their girl child to school.

The Anglophone Crisis was also on the spotlight of Women’s Day commemorations in Buea. The women offered prayers, beseeching God to stop the bloodshed that has inundated the English-speaking Regions for over five years.

They also called on Separatist fighters to lay down arms and embrace efforts towards resolving the crisis.

Although progress is being made to better the situation of women worldwide, statistics still reveal that women continue to be victims of bad policies and discrimination around the world.

Statistics reveal that 70 percent of people who are poor in the world are women, meanwhile, in developing countries; women own just 2 percent of land. Also, 72 percent of the world’s refugees are women and children and at least six out of 10 women are beaten, forced into sex or abused by a partner in the course of their lifestyle.

Illiteracy continues to be very high among women, who represent 2/3 of the world’s illiterate population. Data further suggests that one in five women will become victims of rape or attempted rape in their lives and over half of the people living with HIV worldwide are women.

March 8 in Buea was also an opportunity for the Delegation of Women’s Empowerment to honour women in the Region for their astounding efforts towards gender equality.

One of them was Moffa Jenita, former Southwest Regional Delegate of Women’s Empowerment and the Family. She was honoured with the Woman of the Year award.

After expressing joy and thanks for the recognition, Moffa said: “I served 10 years as Regional Delegate, identifying women, encouraging them, empowering them and little did I know that my day will come when I will also be identified. So, I just want to encourage everybody who is doing work anywhere, do it diligently. one day, the eye of the Lord will fall on you.”

MINPROFF Southwest also honoured a woman said to be the oldest living woman in the Region. Rose Limunga Njie, said to be 122 years old, was given a certificate and some money freely offered by officials.

The oldest living couple in the Region was also recognised. They said their secret has been patience for the 61 years they spent together in marriage.

Alongside march-past where scores of women groups participated, exhibitions also characterised the celebrations in Buea.

NSO Fako Fete Their Culture In A Grand Jamboree

B’da Women Unhappy As Governor Ignores Military Atrocities On Them