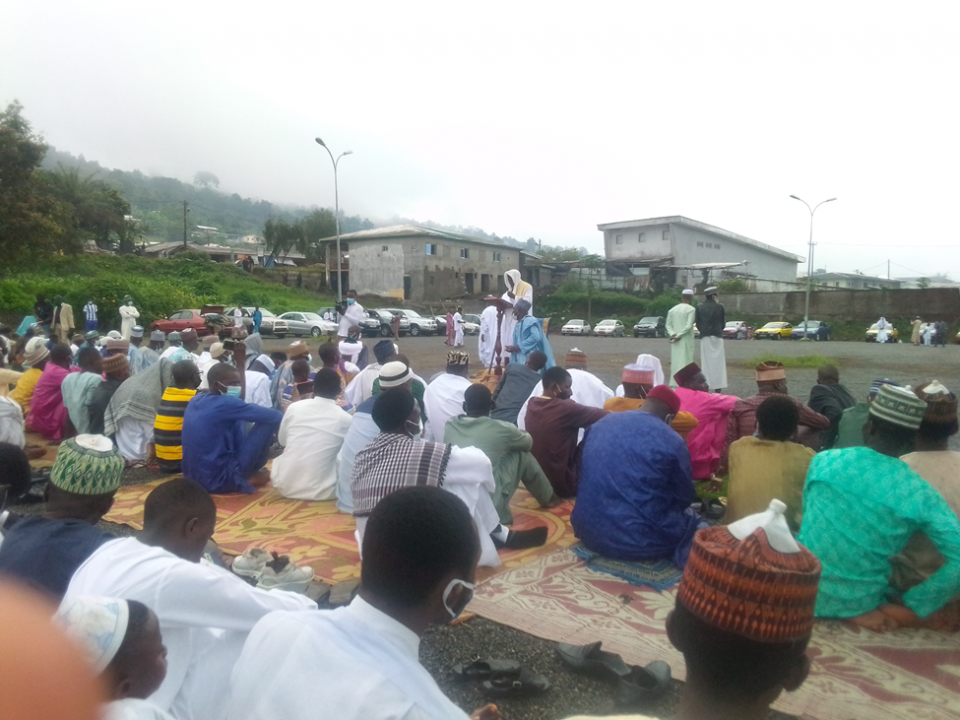 Moslems at Buea Town praying for peace as Imam preaches

Moslem faithful in Buea, Southwest Region, have prayed for peace and tranquillity to reign in Cameroon’s troubled English-speaking regions.

This happened on May 13 as they celebrated Eid al-Fitr that marked the end of the 30 days of fasting or the month of Ramadan.

Ramadan is a holy month characterised by fasting and prayers for Moslems. Fasting during this period constitutes one of the five pillars of Islam.

Celebrating the feast of Ramadan in Buea, Imam of the Buea Central Mosque, Sheik Mohammad Aboubakar, beseeched all Moslems to be peaceful, prayerful and forgiving.

Centring his message on three key issues – unity, forgiveness and reconciliation – he called on them to adopt the spirit of love, patience and tolerance.

He equally reminded them that they should not stop doing good now that fasting has ended.

He asked the congregation to love all, as he expatiated that all humans are God’s creation irrespective of the different religions today. The Imam said God is one.

“We are reminding ourselves that God is one and his authority is one, his message is one, and his prophets speak but one language. It is time for the community to understand that unity is power. The division is chaos. There is strength in forgiveness and reconciliation. Reconcile with your family members,” he said.

The Imam’s sermon was equally focused on the insecurity in some African countries – Mali, Chad, C.A.R, Nigeria and Cameroon in particular. He asked the Moslems to pray for normalcy to return to these areas.

About Cameroon, the Iman said they “are appealing to the powers that be that our children in the bushes who have wronged the state in one form or the other, by taking up arms to fight the state. The head of state has understood this and said I have extended my hands of forgiveness. My children come. It is needed for them to also accept that hand of peace which has been extended to them,” he said.

He urged separatist fighters that they are not obliged to go to the DDR centres but told them that they should get back to normalcy. “If you are afraid that you will be caught by the people you hurt, you can meet religious authorities or traditional rulers who are sincere and they will move you out of that town and get you to settle in some form or the other.”

He equally called on the state to do everything possible to see that there is peace in Cameroon. “Let there be genuine and meaningful dialogue that can make people understand exactly what these people are talking about. The state has understood and something is being done, but cannot be done at the pace of people,” he said.

The event was attended by some Government dignitaries and some leaders of Christian Churches.