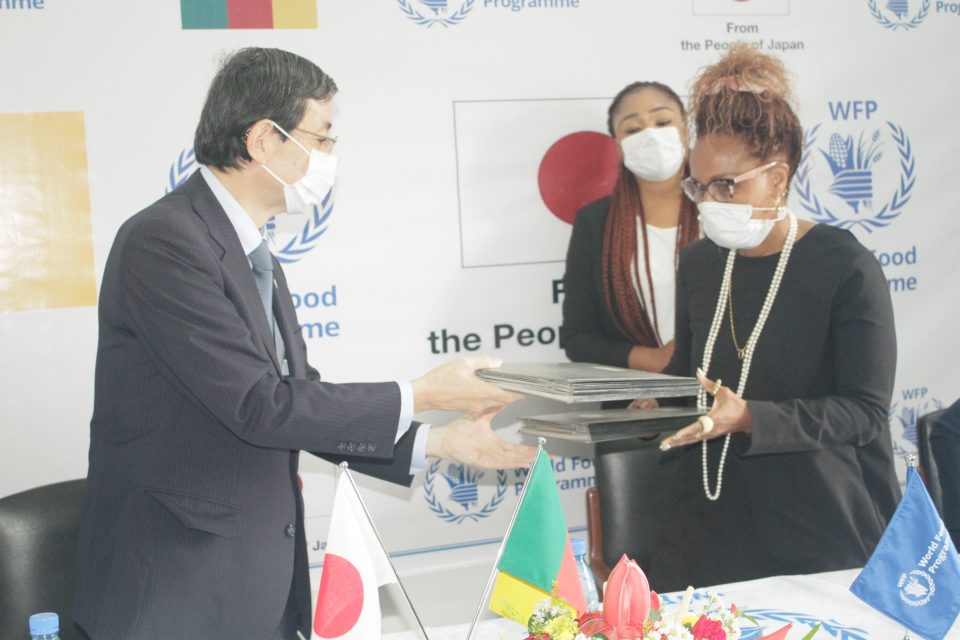 Internally Displaced Persons, IDPs, refugees and host communities in Cameroon will, in the days ahead, start reaping the fruits of a partnership signed between the United Nations World Food Programme, WFP, and the Government of Japan.

The partnership, signed on October 19 in Yaounde, will help to provide food and nutrition assistance to over 185,000 children, women and men in the Far North, Adamawa, East, Northwest and Southwest Regions of Cameroon.

Wanja Kaaria, the Representative of the Country Director of WFP Cameroon signed on behalf of her institution, while the Japanese Ambassador to Cameroon, HE Osawa Tsutomu, signed for his country.

The contribution from the Government of Japan is estimated at over one billion francs (USD 1.83 million). Through the WFP, children below the age of five, pregnant women, breastfeeding mothers and people living with HIV, will benefit.

Speaking shortly after signing the agreement, the Japanese Diplomat said: “the Government of Japan pays so much importance on security and food and is concerned about the situation of the most vulnerable which is aggravated by COVID-19, we decided to extend our assistance through WFP to address the urgent needs of the vulnerable people.”

While adding that the contribution reaffirms the support and solidarity of the Japanese people towards the needy in Cameroon and other host countries, Osawa Tsutomu pointed out that: “…The Peace and stability of Africa is one of the main fields of our corporation. Japan renews its tireless commitments as it is approaching the 8th meeting of the Tokyo International Conference on African Development, TICAD 8, which will take place in 2022.”

Wanja Kaaria said: “WFP is extremely grateful for the continued generosity of the people of Japan. As we move towards rolling out our five-year strategic plan, partners like the Government of Japan are more than ever needed to ensure adequate provision of lifesaving and life-changing response in Cameroon.”

Charles Assamba Ongodo, representative of the Minister of the Economy, Planning and Regional Development, thanked the Government of Japan for the gesture.

With the contribution from the Japanese Government, WFP will procure food commodities such as rice, yellow split peas and super cereal plus which will add to the overall food basket. WFP will also provide food assistance to 185,468 vulnerable persons.

Going by reports, the humanitarian situation in Cameroon continues to worsen with the presence of multifaceted and complex crisis in the three different parts of the country. While violence continues to deteriorate in the Northwest and Southwest Regions, the crisis in the neighboring Nigeria and the Central African Republic has brought into Cameroon hundreds of thousands of refugees.

In addition to the crisis, COVID-19 pandemic has also affected the economy with the food situation in the country affected, as, over 2.6 million people are reported to be food insecure across 14 Divisions in the country, as stated by the March 2021 Food Security Analysis (the Cadre Harmonise).

The 2021 needs overview, HNO of March also outlines that 4.4 million people are in urgent need of humanitarian assistance in Cameroon, an increase of over 500,000 persons as compared to the same time last year.

Issues At Stake: The Truth Of My Journalism