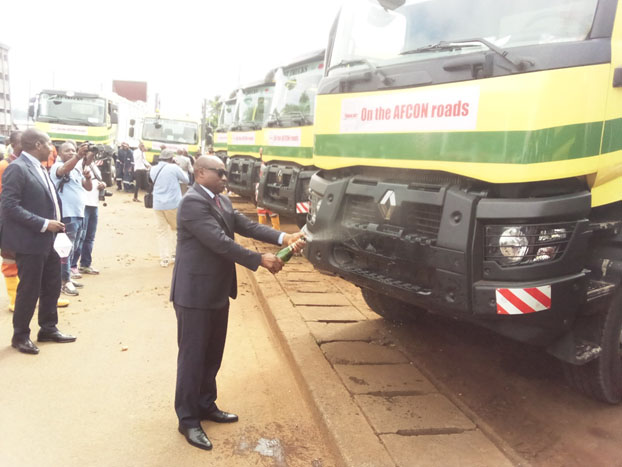 The General Manager of the Cameroon Hygiene and Sanitation Company, HYSACAM, Michel Ngapanoun was in Limbe on Friday, September 17, where he handed over eight brand new garbage clearing trucks to the Limbe branch of the company.

Ngapanoun said that this was the Company’s effort to support Limbe which is one of the host cities for the 2022 AFCON games programmed to start off next January.

Limbe is known as the cleanest city in Cameroon following the 2020 national clean city competition. But the main sanitation company in charge of clearing off garbage from the town and rendering the city agreeable has been facing a problem of fewer trucks to enable it carry on with its assigned task.

“I hope that these new equipment will significantly help in the business of keeping Limbe clean especially as the city shall be welcoming guests for the AFCON games,” the GM said.

The GM went on to implore the population to ensure a close collaboration with the workers of the company by endeavouring to come out on time with their garbage bags whenever any of the trucks signals its presence around their quarters.

The HYSACAM GM was received in town by the SDO of Fako, Emmanuel Engamba Ledoux and the Limbe City Mayor, Andrew Motanga.

On behalf of the City, the Deputy City Mayor, Emmanuel Kontchou who spoke on behalf of Motanga thanked HYSACAM for the gesture which he said was going to significantly boost the efforts of both HYSACAM and the Council to keep the town clean before, during and long after the AFCON games. He said the Limbe City Council has been working in partnership with HYSACAM for quite a long while. Kontchou noted that it is by virtue of this partnership that Limbe was able to win the Clean City Campaign in 2020. He pledged the readiness of the City of Limbe to put the equipment to effective use so that Limbe will continue keeping its record, as the cleanest city in Cameroon.

The occasion ended with the presentation of the new HYSACAM Branch Manager for Limbe, Etienne Nawossi and also the trucks offered. These eight garbage clearing vehicles come to add to a few other trucks that the company has been using to keep the town clean.