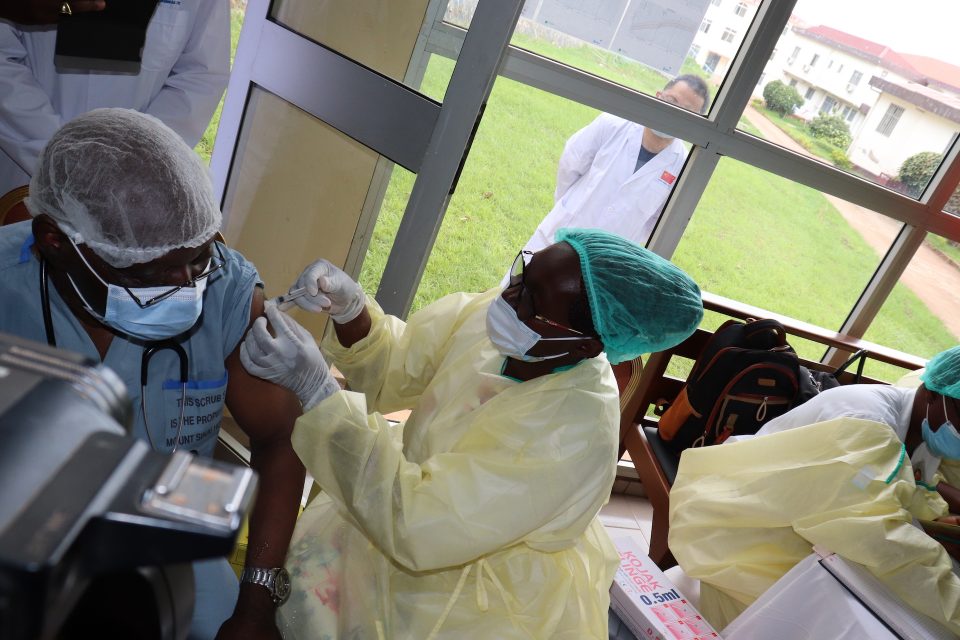 The two Anglophone regions are among the bottom four regions where Covid-19 vaccination is still very low. Mary Wirdin, 35, mother of two, primary school teacher, set out to take a jab of the Covid-a9 vaccine, after trekking for 10k from Wahsi to the Jakiri Health Centre, she could not get the vaccine.

It is Friday August 13, Bamenda Northwest Cameroon, roads leading into the regional capital are blocked.

“I wanted the Johnson & Johnson vaccine, but could not get, I was told due to road blocks, vaccines have not been sent to the district hospital, so, I have to wait”, Wirdin, said.

It not the first time roads are blocked, but a constant phenomenon since the 2017 when the Northwest and Southwest regions turned into an armed conflict till date.

Patients are pushed trucks to the Bingo Baptist Hospital. access to the Banso Baptist and Shisong hospitals, some of the reputable hospitals is blocked.

There has not been movement of vehicles, hence, not much activity concerning Covid-19 vaccination.

Dr Cornelius Chebo, Chief of the Northwest regional Covid-19 Incident Command Centre says with the road blocks there is nothing much they could to but wait till when the roads are opened.

According to Dr Chebo, the format or line of vaccines in the country is the same for Covid-19 since their integration into the Expanded Programme of Immunization, EPI.  “Vaccines are delivered in the central pool and taken from Bafoussam in the West region by the Covid-19 incident command centre in Bamenda”.

After collection, the vaccines are registered and distributed according to requests from the districts.

The chiefs of district health centres then collect for their units and down to the population.

In the region, it is very challenging to transport and stock vaccines, because the distance has increased drastically for some districts due to the crisis.

For example, officials from Donga Mantung Division used to pass through Kumbo but the road is no longer accessible. They have to go through Magbwa in the Adamawa before they get to Ndu, Nwa and Ako, Chebo explained.

“There is need to wait until the roads are opened for the vaccines to reach the areas and this slows the vaccination process”, Chebo says.

The district hospitals have been paying more to transport the vaccines. It has been tough but the good will of the managers at the district level has been overwhelming- they incur charges but they still take the vaccines, Chebo stated.

But, this has not only happened to Covid-19 vaccines but with other vaccines within the context of the ongoing crisis, he added.

In some parts of the Northwest region, armed groups destroyed the electricity grid lines and even in Bamenda there has been constant outage with the central cold room not an exception, Chebo said.

“We used to stay here more than 10 hours without electricity, and it was difficult to respect the 8 degrees Celsius to store vaccines.

“Once the cold room reaches 10 degrees Celsius, it signaled. When the outage has lasted for more than ten hours, it is not a good sign when keeping vaccines”, he stressed.

The challenge was more in April, 2021, with more than eight signals a month which meant we were out of electricity for more than ten hours, he adds.

To salvage the situation health authorities brought in a generator and have been supplying fuel.

“But the challenge still lingers in some districts and they had to resort to using fuel powered generators too” Chebo explained.

However, the good thing is the districts are looking for how to overcome the challenges. “Most health facilities, Fundong, Ndop and Nkambe are going on solar energy to maintain their cold chains, a recommendable effort Chebo said.

It is regrettable that Batibo has solar fridges but the panels were vandalized within the context of the ongoing crisis.

“If the facilities are not in a secure zone, there is a risk of them being vandalized” Chebo maintained.  Despite the challenges the Northwest region of June 8, 2021, statistics from EPI, was on the fourth position in the overall vaccination table. Presently, the Northwest has vaccinated more than 12,664 people.

In The Northwest Region

Data from the Northwest Covid-19 Incident Command centre actually shows that some of the areas where vaccines were destroyed have low vaccination rates except Kumbo East.

The bigger challenge however is that many people in the Southwest region are reticent about taking a jab and prefer to take their local herbs.

The situation is not different in the Southwest region where access and storage remain a major hindrance to vaccination especially in remote areas.

“I don’t think i will take the vaccine if i am not forced, i rather go for local herbs”, Njie Lyonga John-Paul, a resident of Bokova, in Buea in the Southwest region, stated.

Cameroon vaccinated 400,000 persons on August 14, according to a tweet from the Minister of Health, Dr. Manaouda Malachie.

Map Of Vaccination In Cameroon

But, the latest information from the Expanded Programme of Immunization, EPI, shows the total number of persons vaccinated by region.

The crisis hit Northwest and Southwest regions are among the bottom four least vaccinated of the Cameroon ten regions.

The ongoing conflict may in part, have contributed to the slow vaccination. However, the South region is the region with the least vaccinated population.

“This OUTBREAK story was supported by Code for Africa’s WanaData program as part of the Data4COVID19 Africa Challenge hosted by l’Agence française de dévelopement (AFD), Expertise France, and The GovLab”