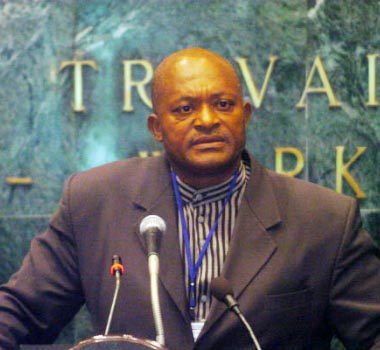 Former Member of Parliament, MP, for Ndian, and Paramount ruler of the Batangas, Hon. Norbert Nangiva Mbile, is no more. He was also member of the National Anti-Corruption Commission, CONAC.

Going by the information made public, the member of CONAC died at the Yaounde Social Insurance Hospital, following an illness.

Born in 1956 to late Hon. Nerius Namasso Mbile, one of the patriarchs of the Batanga, and Margaret Bua Mbile, Norbert Mbile grew up to become a politician. From 2002 to 2009, he was Member of Parliament for Ndian Division. He was crowned Paramount ruler of the Batanga people in 2009.

Besides being a member of CONAC, Mbile was also member of the National Commission of Human Rights and Freedoms, NCHRF, Yaounde branch.

Ahead Of COP26: Cameroon Revises Document, About FCFA 30,000Bn Needed For Climate Change