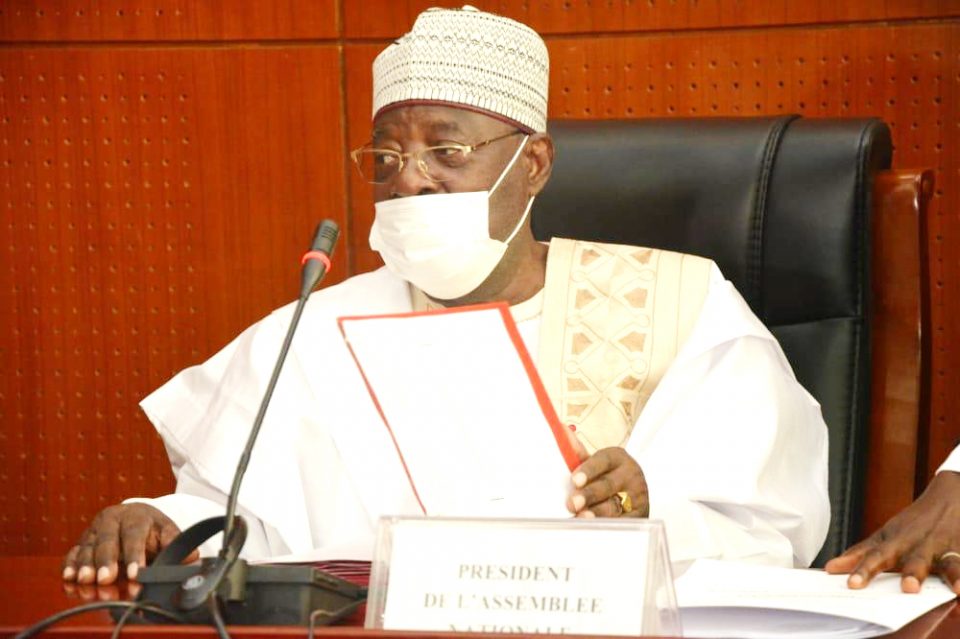 The Member of Parliament, MP, for the Mayo-Sava constituency in the Far North Region, Hon. Cavaye Yeguie Djibril, has been re-elected as House Speaker of the Cameroon Lower House of Parliament.

Hon. Cavaye of the CPDM Party was elected on March 18 during a Parliamentary session whose major item on the agenda was the election of the Bureau of the National Assembly.

The Oldest Member of Parliament, Hon. Laurentine Nkoa Fegue, who has been chairing deliberations since the beginning of the session on March 11, presided over the plenary session.

The 82-year-old MP from the Mayo-Sava constituency, after his overwhelming re-election is clocking 52 years in Parliament after beginning his duties at the National Assembly in 1970. His 52 years at the National Assembly have also seen him head the Parliament as House Speaker and he is getting into his 30th year as House Speaker, following his first election in 1992.

However, Hon. Jean-Michel Nintcheu of the SDF party was the only MP who stood up to contest Hon. Cavaye in the election of the House Speaker. After the election, Hon. Cavaye obtained an overwhelming vote of 148 out of 161. Hon. Nintcheu emerged only with a single vote while 12 votes were declared null and void.

Besides the re-election of Hon. Cavaye, a total of 23 Members, including the 1st Vice-President, four Vice-Presidents, four Questors and 12 Secretaries were also elected. Hon. Hilarong Etong was re-elected 1st Vice President with 145 votes against 14 void. Even though the Bureau has not changed entirely, Hon. Mary Muyali Boya epse Meboka was elected as one of the Vice Presidents replacing late Hon. Emelia Lifaka.

Shortly after the elections, Hon. Cavaye thanked the Head of State and Chairman of the CPDM party for restoring confidence in him. He added that he has never failed and will not fail as he promised to work with all MPs, irrespective of their political party.

“This is a new challenge and I pray God that I should be able to concentrate on working on the effective representation of the population. I also pray that the population should also collaborate with us because we are there to control the Government on their behalf. If the population does not articulate their problems, they may think that you are not working well,”

Hon. Mary Muyali of the CPDM

“I am extremely happy and satisfied because I decided to be a candidate at the moment when everything was maintained by the majority party with the candidacy of Cavaye Djibril. Knowing his party has decided to invest in him, I decided to declare my candidacy. I was not going in to be elected, but I wanted to send a signal and I am sure the signal has gone; the signal was well received. The signal was that, after passing over 30 years at the head of the institution, with what he has done, it was time for Hon. Cavaye to go on retirement.”

Cavayé Yeguié Djibril was born on January 1, 1940 in Mada, Tokombéré Subdivision of the Mayo-Sava Division, in the Far North Region of the country. He studied at the regional physical education and sports centre from 1960 to 1963 and then taught in Maroua.

He was appointed inter-ministerial inspector for the Far North in 1965 and entered the East Cameroon Legislative Assembly in April 1970; he also became the traditional Chief of the Mada in 1971. Following the creation of a unitary state, Cavayé was elected to the National Assembly of Cameroon in 1973 and obtained the position of questor in the bureau of the National Assembly. In 1975, he was included in the Central Committee of the ruling party, the Cameroon National Union, CNU.

After 10 years in the National Assembly, Cavayé was elected 2nd Vice President in 1983. In 1985, when President Paul Biya transformed the CNU into the CPDM, Cavayé was retained as a member of the Central Committee.

After Paul Biya was re-elected in the October 1997 Presidential election, despite an opposition boycott, Cavayé declared at the opening of a Parliamentary session on November 1, 1997, that MPs should “respect the institutions of the Republic” and “be worthy representatives” of the “sovereign people,” but opposition MPs ignored his warning and boycotted Biya’s swearing-in ceremony on November 3.

His stay as House Speaker hasn’t been smooth, that was why in 2008, one CPDM MP from the Far North, Hon Adama Modi, stormed the hemi-cycle and vehemently opposed the re-election of Hon. Cavaye by presenting his candidature for the post of Speaker. Although the MP was accused of violating party discipline, Hon. Adama Modi acted the scene again in 2009.

Issues At Stake: Official List Of Reference Prices, Rates, Still Only In French