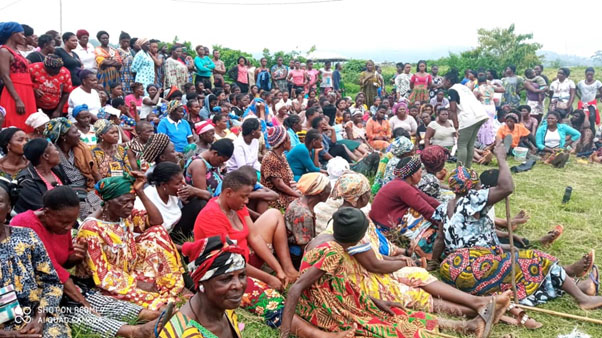 The Foundation says it wants to empower teenage mothers with skills to enable them to provide for themselves and their born/unborn children.

“Due to the high increase in the number pregnancies amongst teenage girls as a result of idleness and inadequate education, GCF has set a goal in the month of November, to empower at least 50 adolescent mothers and pregnant teenage girls in Fako Division with livelihood skills to help them improve on their living standards and provide for their born/unborn children,” GCF said in a statement

It furthered appealed that, “To successfully carry out this activity, we rely on the generosity of the general public for support. We plead that you make a commitment to support our appeal cash/kind donation in response to our goal. Your generosity will make a difference in our community by enabling us to continue in our work of serving humanity.”

The Grace Chin Foundation has been for over three years: since 2018. It has been carrying out humanitarian activities for the vulnerable in different communities of the Southwest and Littoral regions, where it has also distributed relief materials to Internally Displaced Persons, IDPs, empowering pregnant girls and educating girls on menstrual hygiene management.

The Foundation reveals that it has reached out to over 5,000 people who have been benefiting from the organisation’s humanitarian activities since the birth of the organisation. The Foundation has attributed the cause for teenage pregnancies to idleness and inadequate sexual education, especially in the face of the Anglophone crisis that has left thousands of teenage girls stranded and out of school. It says the idleness around and peer pressure has been one of the driving forces behind the many teenage pregnancies that often compound the already precarious conditions in which the girls find themselves.

The Foundation’s CEO Mary Jane Chin Yaya says the funds raised will be used to buy items for the teenage mothers, and also finance training for them on sustainability projects, through which they should be able, in the long-run, to provide for themselves and their children.