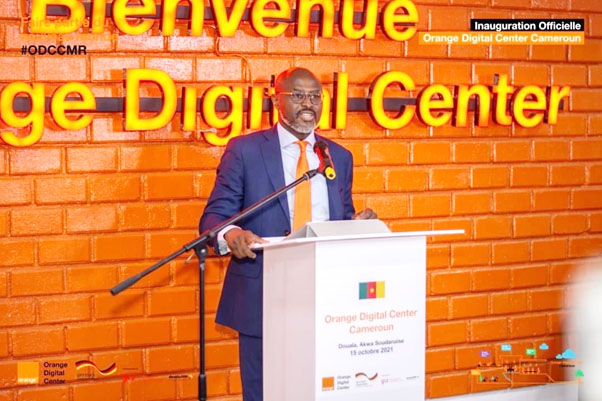 The Government of Cameroon has, through the Minister of Post and Telecommunications, Libom Li Likeng nee Mendomo Minette, saluted the great initiative taken by the reputed Orange Group together with its affiliate, Orange Cameroun, working in partnership with the German Development Cooperation, to create the 6th Orange Digital Centre in Africa and the Middle East, in Cameroon.

Worth noting that the five other countries in Africa and the Middle East where Orange Digital Centres have been created are Tunisia, Senegal, Ethiopia, Mali and Ivory Coast.

The Post and Telecommunications Minister, Mme Li Likeng, registered Government’s appreciation while speaking at the official inauguration ceremony of the Orange Digital Centre in Cameroon located in the nation’s economic capital, Douala, on October 15, 2021. Minister Li Likeng represented the Prime Minister and Head of Government at the ceremony.

The P& T Minister, in her inaugural address, asserted that the  Orange Digital  Centre has as a vocation to support the employability of Cameroonian youths by giving them free training in digital technology, which enables them to develop skills and thus enhance their competence.  She added that the Orange Digital Centre also has the vocation to promote innovation, entrepreneurship and the local digital ecosystem.

Thus, the Orange Digital Centre in Cameroon, among other things, inclines to enable interested young Cameroonians to acquire skills in digital technology that enables them to acquire competence in today’s digital world and raise their employability. The Digital Centre, thus also encourages innovation and entrepreneurship which is self-employment.

The Orange Digital Centre is also aimed at contributing significantly to the fight against youth unemployment in the country, as well as promoting economic growth through encouraging entrepreneurship which leads to job creation as well.

The Minister of Post and Telecommunications as well noted that the Orange Digital Centre has the peculiarity of accompanying youths in the fight against functional illiteracy and the digital divide. That is illiteracy in digital technology.

Cameroonian youths strive to make the best out of the digital economy.

Stating that each country and its population have their specificity, the P&T Minister called on Orange Cameroun to ensure that the process put in place at the Orange Digital Centre, is a process of training young people with projects that favour the emergence of the local digital economy, adapted to the needs of the Cameroonian population, but which should, however, respond to international standards.

Speaking at the occasion, the Chief Executive Officer, CEO, of Orange Cameroun, Patrick Denon, stated that the fight for the reduction of the digital divide is not the affair of the Government alone. He said Orange Cameroun, as a citizen-friendly enterprise, is working beside the Cameroon Government to support the digital ecosystem in the country.

The CEO pointed out that, through the Orange Digital Centre in Cameroon, which is the first in the Central Africa Sub-region, lots of opportunities are being offered for the training of youths in digital technology to enable them to acquire digital skills and thus enhance their employability in today’s digital world.

Denon said the Orange Digital Centre is a strategy that consists of anchoring and promoting the digital culture, supporting employment, accompanying Cameroonian start-ups and stimulating innovation. He asserted that, by these, Orange is putting digital innovation at the service of socio-economic development.

The CEO of Orange Cameroun said the company will attain this ambition of training youths in digital technology to enhance their employability, encourage innovation, as well encourage entrepreneurship among other targets, thanks to four key programmes that have been deployed within the Orange Digital Centre.

These four key programmes include the Code School to learn best practices and management of ongoing projects, the Orange Fab which is an accelerator of start-ups, the Fablab Solidaire which is one of Orange Foundation’s digital manufacturing workshops, and the Orange Ventures Africa which is the Orange Group’s Investment Fund.

As earlier mentioned, Germany, through the German Development Cooperation is involved in the Orange Digital Centre.

According to Orange Cameroun; “Orange and the German Development Cooperation, through GIZ, are working together as part of a development partnership within the develoPPP programme, which GIZ is implementing on behalf of the German Federal Ministry of Economic Cooperation and Development.” The goal of the partnership is to fulfil their shared vision, foster youth employability and access to ICT jobs to women and girls while supporting sustainable growth and the country’s (Cameroon’s) digital transformation.

It was for this reason that the German Ambassador to Cameroon, Corinna Fricke, was one of the personalities at the official inauguration of the Orange Digital Centre in Douala last October 15.  She said Germany was proud to support such a forward-looking project.

The Ambassador also stated that Germany has always been, and will always continue to be besides Cameroon, in support of its efforts or strategies towards sustainable development.

Issues At Stake: Gnashing Under Weight Of Ransom Payment