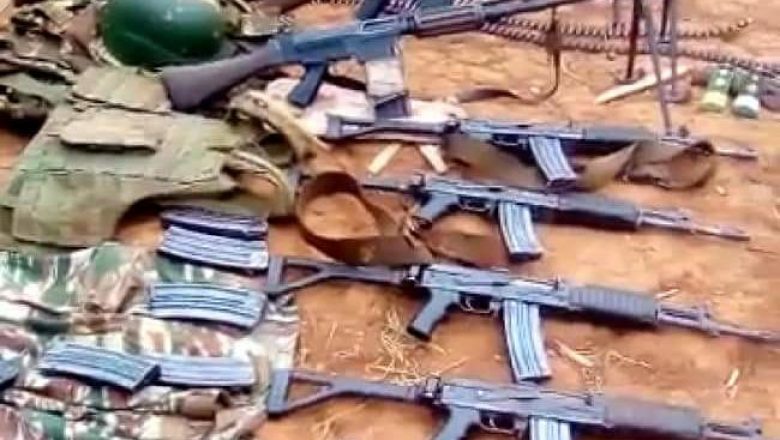 The Government of Cameroon has symbolically destroyed dozens of illicit arms and weapons circulating in the country, as a means to attain peace amid two troubling conflicts in the Far North, and in the Northwest and Southwest Regions.

Government officials say most of the weapons destroyed in Buea on May 19 were surrendered by repentant Boko Haram and Ambazonia fighters, with some seized from civilians.

The recent occasion in Buea dubbed; “symbolic destruction of illicit weapons circulating in Cameroon,” was chaired by Prime Minister, Chief Dr Joseph Dion Ngute, as part of activities to implement the AU/UN’s Silencing the Guns in Africa initiative.

“The proliferation and trafficking in small arms and light weapons constitutes a permanent threat to sustainable peace in several regions of the world. According to several experts, there are more than 40 million illicit weapons circulating on the African continent alone,” said PM Dion Ngute, adding that this hampers the development of society.

Chief Dr Dion Ngute said Government has temporarily closed arms shops in some Regions and stringent measures have been taken to check smuggling of weapons into the country.

The stringent measures taken to silence the guns in Cameroon come at a time when corruption, mismanagement, embezzlement and lack of transparency cry out louder within Cameroon’s civil service, yet they are not being accorded as much attention.

As Government, through the Prime Minister, believes illicit arms in the country is the main cause of turbulence, some experts rather blame the reigning conflicts on ills such as embezzlement, corruption and bad governance.

These ills, alongside other factors, have hindered development and national unity in the country, sparking outrage and contributing to the on-going crisis in the Northwest and Southwest Regions.

According to renowned human rights advocate, Barrister Felix Agbor Nkongho, the root cause of conflict in Cameroon and other African States is not only the presence of arms, but ills such as bad governance.

“The visit of the Prime Minister is a good thing … but, you see, it is not just about silencing the guns; it is also about looking at things from a very holistic perspective. Yes, to silence the guns is a good thing, because some of these small arms that we have around have caused untold atrocities to the civilian population.

“But how do we address the fundamental or the root causes affecting the people of the continent called Africa, namely; bad governance, corruption, mismanagement, failure to dialogue, election rigging – these are the bane of the problems in the continent. While we silence the guns, we must address these issues also, because they are equally very important. We cannot do one without doing the others; it comes in a package…” said Barrister Agbor Nkongho.

The symbolic burning of illicit arms in Buea is in line with a joint AU/UN effort to end conflict in Africa through the Silencing the Guns Initiative, which aimed at ending all conflicts in the continent by 2020.

According to Senator Charles Mbella Moki, the symbolic destruction of arms “subscribes to the African Union’s call for a silencing of guns; a message that allows for each and every one of us, as citizens of this country, to contribute in creating an enabling environment for peace to prevail.”

The outbreak of crisis in Cameroon’s Northwest and Southwest Regions has multiplied the transfer of illicit arms into the country and has increased the number of arms under civilian control.

With numerous conflicts already on-going, the African Union says the possession of illegal weapons by civilians has a major influence on the conflicts plaguing the African continent and everyone must join the fight against the illicit arms and weapons.

A 2019 Small Arms Survey, done in collaboration with the AU, revealed that rebel groups and civilians in Africa possess more than 40 million small arms and light weapons, while State entities hold less than 11 million arms.

The survey stated that 80 percent of small arms and light weapons circulating in Africa are in the hands of armed groups, militias, armed gangs and civilians.

In 2013, the AU launched an initiative to silence the guns in Africa by 2020. AU countries then undertook to declare September 2020 the Africa Amnesty Month, during which they charged all armed groups and warring parties in the continent to ceasefire.

Despite aiming to end conflicts in Africa by 2020, AU’s ‘Silencing the Guns’ initiative is far from attaining its goal as conflicts have continued destabilising Africa, with fresh confrontations arising in Cameroon, Ethiopia, Chad, DR Congo, Central African Republic and others, since the initiative was launched.